Why Marketers Must Pay Attention to Tumblr & Pinterest Now! [Research]

Have you considered adding the newest social media upstarts Tumblr and Pinterest to your marketing mix? If not, here’s the case for adding these visually rich social media venues to your social media strategy.

While at first blush Tumblr, classified as microblogging, and Pinterest, classified as a social media network don’t seem similar, they are.  Both sites feed on visual information portrayed with limited associated text and marked with hashtags. Tumblr offers a broad array of content formats including text, photos, quotes, links, music and video while Pinterest is limited to visuals (which can include text as part of the graphic.) Extend your content marketing to these two sites to feed the content beast.

At their core, both social media entities thrive on curation of online content remixed to portray one’s unique personal style and viewpoint. Based on recent Pew Internet research, 46% of adult internet users are creators because they’ve posted original photos and/or videos online which they created and 41% of adult internet users are curators who’ve shared photos and/or videos they’ve found. 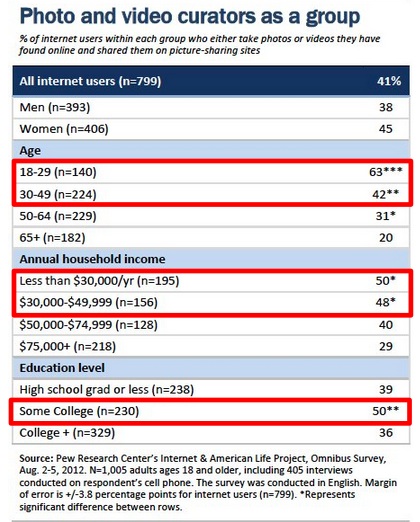 Carina Chocano writing in the New York Times refers to this as a “low-dose visual lithium” that incorporates “Sehnsucht or addictive yearning.” The driving power of these social media sites is that they empower participants to express their creativity by juxtaposing other people’s work. This raises issues of copyright protection and content ownership.

Interestingly, Tumblr came from nowhere in 2011 to cross marketers radar and Pinterest has experienced hyper-growth in the first half of 2012. During the summer, these two sites have been close in terms of the number of unique visitors according to Compete. 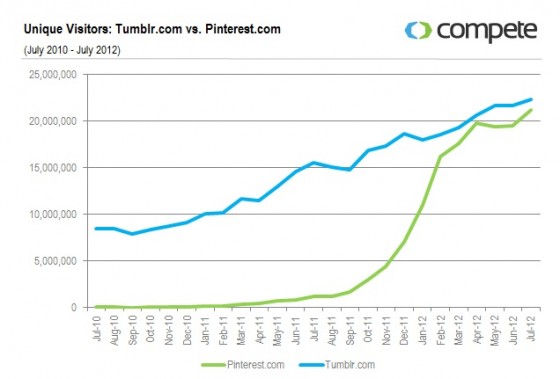 By contrast, in terms of average stay measured in seconds, Tumblr has maintained its level of engagement while Pinterest has experienced sharper highs and lows based on Compete data. 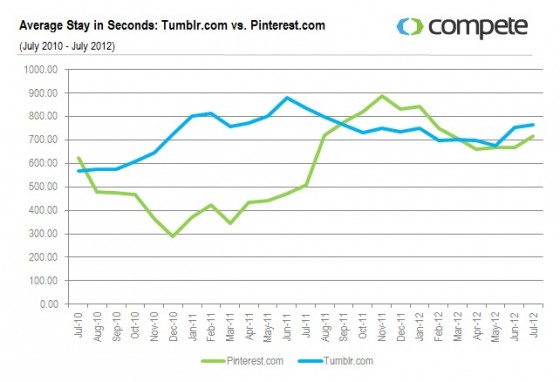 In terms of audience, Tumblr has a tight hold on the 18-25 aged demographic. Pew Research found that 5% of online adults use Tumblr and, specifically 11% of young adults use this service. By contrast, Pinterest tends to be female and slightly older. 12% of online adults use Pinterest and roughly one out five online women use the service according to Pew Research. To this end, it’s useful to examine your product or brand’s marketing persona and social media persona.

Given the meteoric growth rate of these two social media entities, it’s important to consider the longer term. Being an early marketer can be valuable in terms of gaining traction. For example, B2B firms like Hubspot are experimenting with Pinterest and Search Engine Land is testing Tumblr.

But as a marketer, it’s critical not to limit your social media spend based solely on age.  Recent comScore research revealed that the number of search visits to Tumblr increased almost 200% year-over-year to 24 million search clicks in July 2012.  This means that Tumblr has additional marketing value.  Along these lines, Shareaholic found that Pinterest was the best new source of traffic. 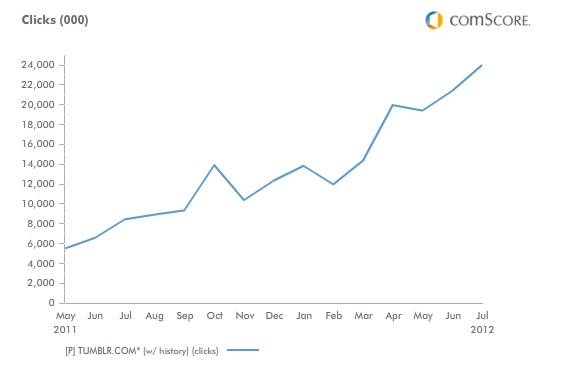 In an era of limited marketing budgets and related resources, the question is determining where to focus your efforts.  To this end, it’s important to think in terms of the marketing basics, specifically sales. If you’re still not convince about Tumblr and Pinterest, check out this purchasing information from comScore’s US State of the Internet. Pinterest users are second in terms of buying power (after LinkedIn where professionals are buying bigger ticket items). These people participate on a more frequent basis. That said, given the relative size of Tumblr compared to Facebook, it’s not that dissimilar in buying behavior. Providing another reason to be present on these sites. 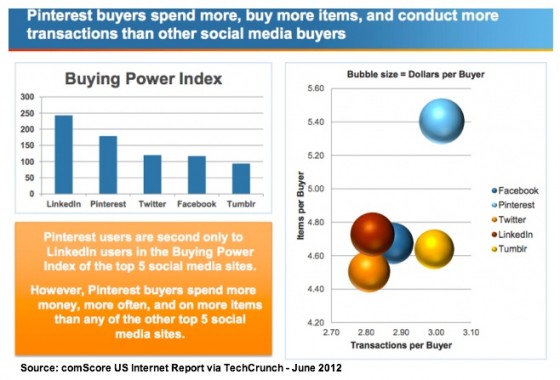 As a marketer, it’s important to stake your brand claim across social media platforms to ensure your brand is represented where your prospects and customers are and will be even with limited resources. While expansion across social media translates to more resources and engagement, assess whether you can streamline your efforts to meet multiple needs.

Have you used either Tumblr and/or Pinterest? If so, what was your experience and what would you recommend to other marketers?

2 Responses to Why Marketers Must Pay Attention to Tumblr & Pinterest Now! [Research]