Twitter has an engagement problem.
A microblogging social media platform enabling 140 character communications, Twitter is approaching its 500 millionth account. That makes this is a good point to look at what new Twitter users are actually doing.

A top line view of Twitter’s path to 400 million users reveals slow adoption and then a big jump in early 2009. This makes sense since, unlike other social media platforms, Twitter has its own special language and requires time to become proficient. [Need help? Here’s how to get your Twitter Mojo.] As Twitter’s gained more mainstream attention, it’s continued on a relatively steady growth trend.

Interestingly, during these last two years, teen use of Twitter has doubled from 8% of online teens to 16% according to Pew Internet Research. This teen segment has moved to Twitter since it gives them a sense of control, allows users to select a pseudonym, and offers a channel for private communications. 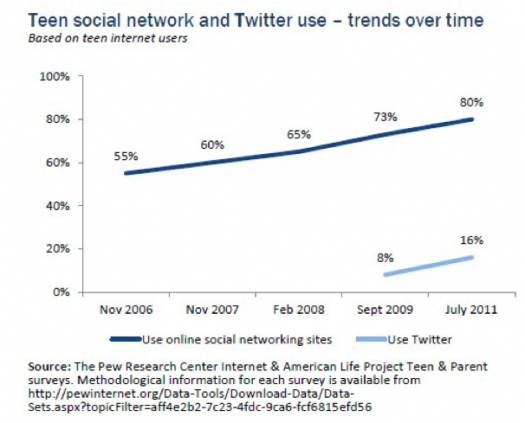 Twopcharts estimates that only a maximum of 20%-25% of new registered Twitter users convert to active new users, with only about 10% of new accounts actively sending out tweets. Before you assume that all Twitter activity is created equal, Twopcharts explains that these accounts were opened in the last three months. While they’re probably similar to accounts opened within the last year, their activity can’t simply be extrapolated to the entire Twitter population.

What does this mean for marketers? Take this low usage into consideration when developing your social media marketing plans. As with any emerging technology, understand that you may need to provide an explanation to your target audience if you want them to overcome the hurdles to using Twitter.

How do you view these results as they apply to your marketing?

Here are some related articles you may be interested in.