How to Craft The Most Retweetable Tweets 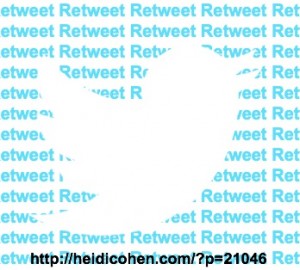 One way is to maximize each tweet’s chances of being retweeted by using recent research to craft the most retweetable tweets and to know when to send them.

Of course, you also need to track your results since your audience behavior may vary and you’ll want to adapt your behavior accordingly.

Here’s what Track Maven discovered based on their analysis of 1,423 Twitter accounts with 1,000 or more followers. A total of 1.7 million tweets were examined. A number of the topics covered in this research is similar to Dan Zarrella’s findings. 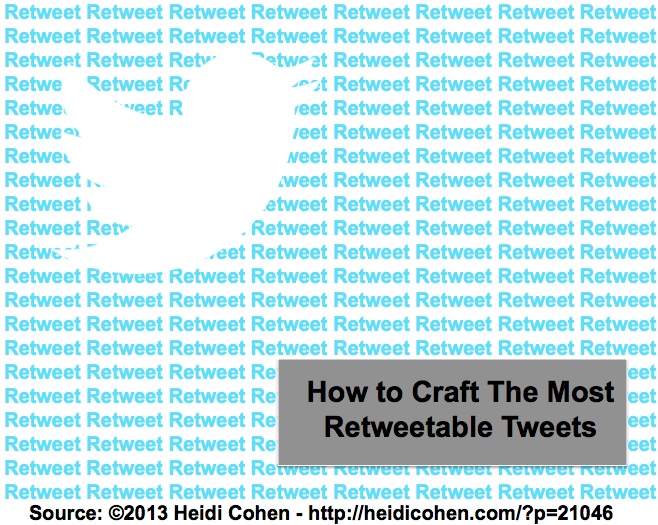 Tweet frequency by day of the week. Most tweets are sent during the workweek, Monday through Friday. Activity drops off around the weekend. Tweets are highest during the middle of the week, Tuesday (17.2%), Wednesday (17.2%) and Thursday (17.4%) when people have cleared away the build up from the prior week and are focused on work. 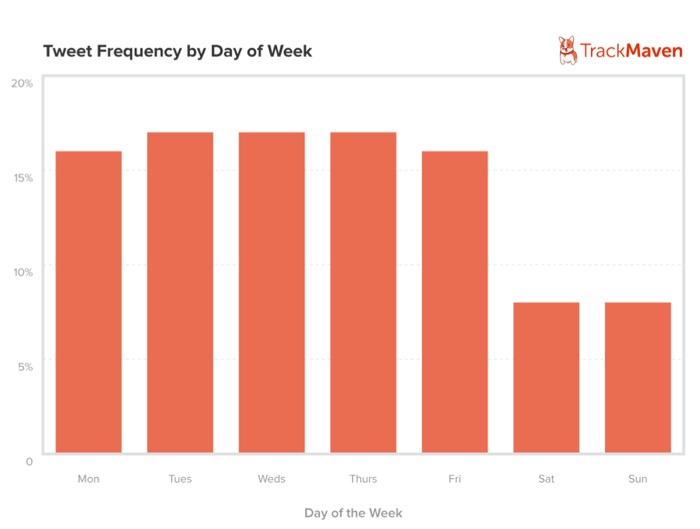 Retweet frequency by day of the week. While most tweets are sent during the workweek, Sunday has the highest retweet rate with an average of 0.168 retweets per 1000 followers. 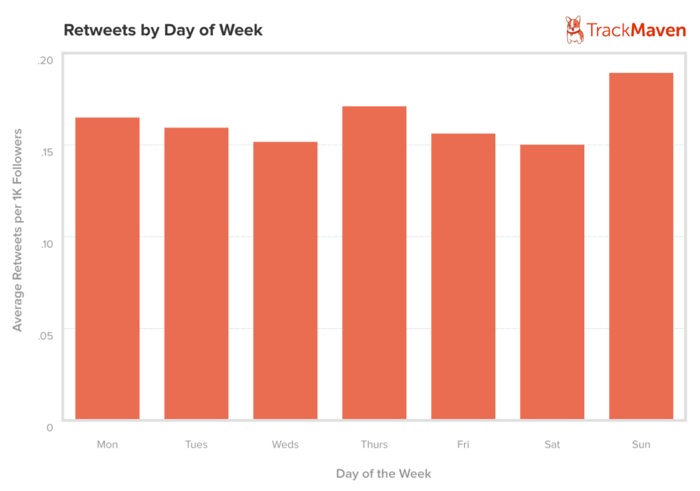 Tweet frequency by time of day. Tweet frequency is highest during work hours on the US East Coast. Tweet frequency peaks at lunchtime (12pm to 1 pm), the beginning of the West Coast workday (9 am to 10 am). Noon hour accounts for 8.01% of all tweets sent during the day. 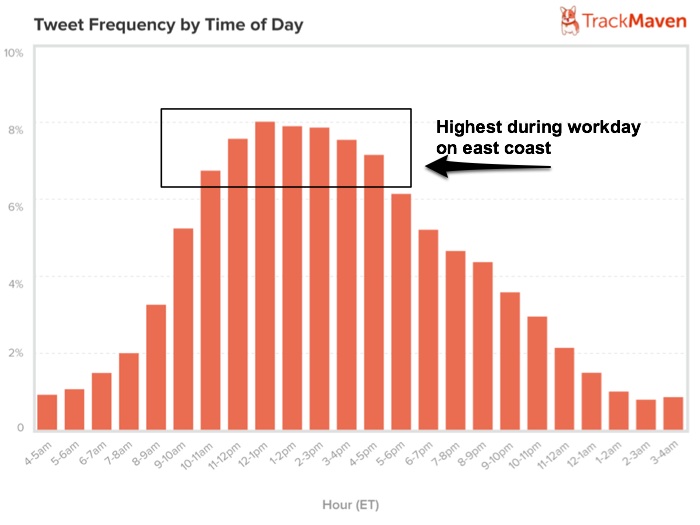 Retweet frequency by time of day. Tweets sent in the evening, post work hours, specifically between 9pm and midnight East Coast time, garner the most retweets. Tweets sent between 10pm and 11pm, when it’s evening for most of the US, receive a peak of 0.194 retweets on average. 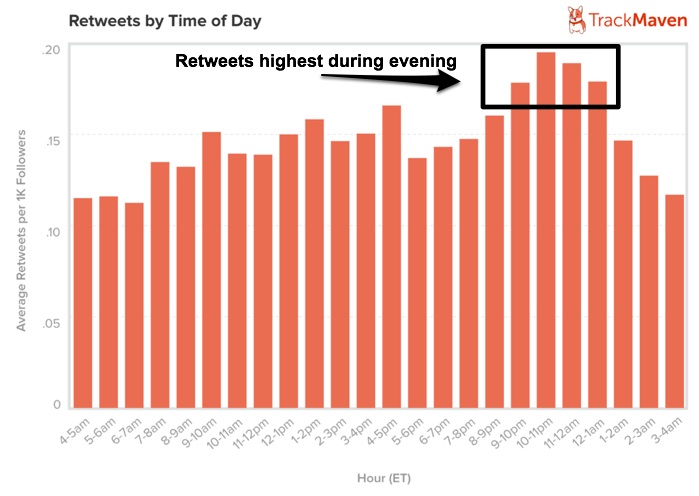 Hashtags, which are prevalent across different social media platforms as a means of attracting attention increase the likelihood of retweets. 5 hashtags in a tweet on average gets 0.301 retweets while not using hashtags has an average of 0.116 retweets.

While many Twitter users steer clear of using more than 3 hashtags, the use of 5 hashtags versus 3 appears to increase retweets. Even the use of 6 and 7 hashtags yields higher retweets than the use of 3 hashtags.

Interestingly, the use of over 11 hashtags appears to yield over 0.500 retweets. This seems like an outlier since it would mean that most of the tweet content would be hashtags. 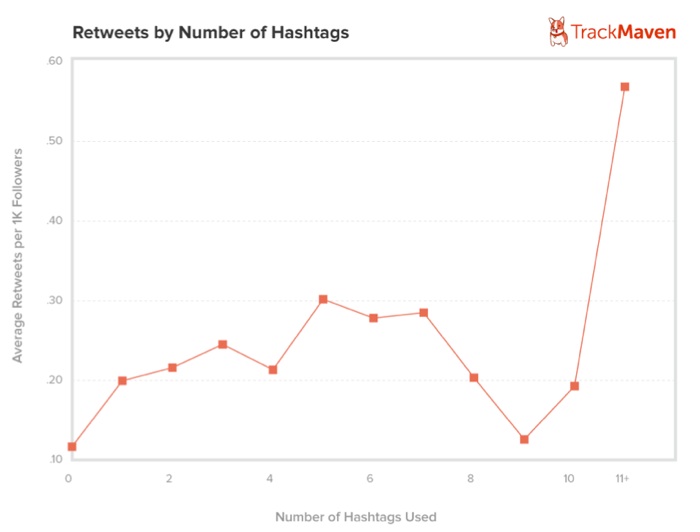 Based on Track Maven’s data, you maximize retweets with 4 or 6 mentions. 6 mentions yield an average of 0.190 retweets. Beyond 6 mentions, there’s steady decline in retweets.

Yet, this data doesn’t take into consideration the fact that increasing the number of mentions limits the length of the message, especially with longer (over 10 letters) Twitter handles. 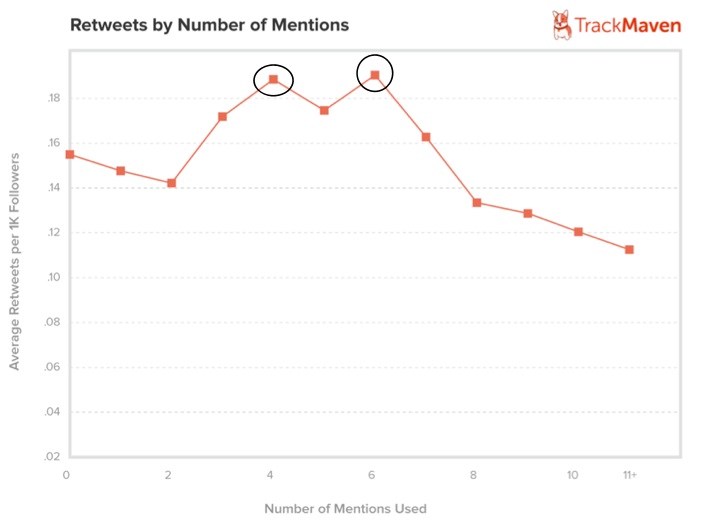 The placement of a link within a tweet affects both the CTR  and the number of retweets. Putting a link 90% of the way through your tweet or near the end of your message yields an average of 0.2 retweets. 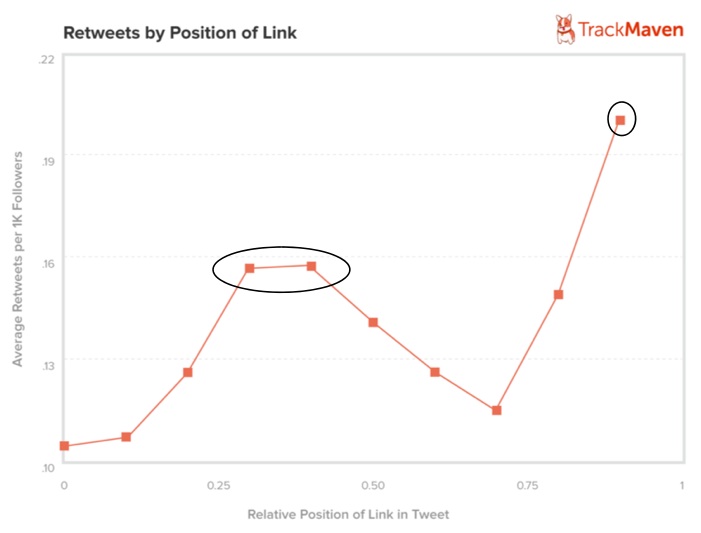 Language use matters for retweet frequency

Skip abbreviations on Twitter to increase retweets. Spelling out the entire word “Retweet” in your tweets receives on average 1.88 retweets. Using “please” will gather 0.32 retweets on average and “now” produces on average 0.17 retweets. This is in line with Twitter research by Dan Zarrella.

Also, this portrays a similar trend to Disruptive Communications’s findings that showed over 40% of UK customers expected good spelling and grammar from businesses and brands. 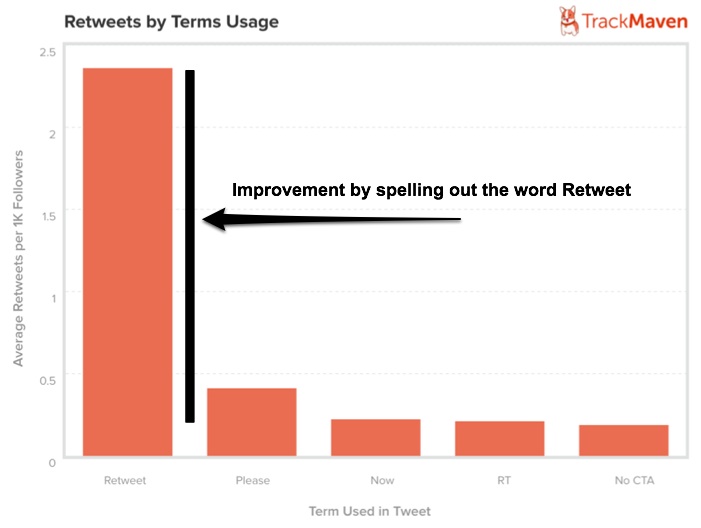 Once a user adds 9 exclamation marks they produce 0.484 average retweets, in part this may be attributable to the fact that they’re acting in lieu of an actual word.

Author Elmore Leonard had a different perspective on explanation mark usage. He limited use to 2 or 3 within 100,000 words. 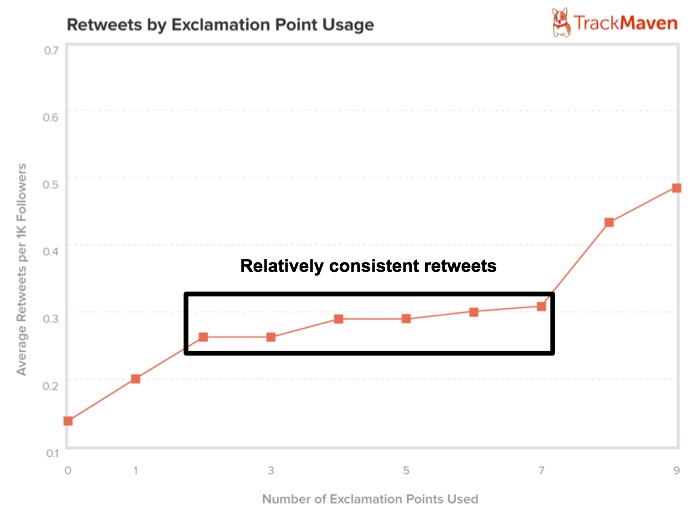 NOW HEAR THIS! Screaming in the form of sending tweeting using only capital letters attract more retweets. Specifically all upper case messages receive 0.8 retweets on average compared with tweets with a 0.1 ratio of capital letters that receive an average of 0.147 retweets. 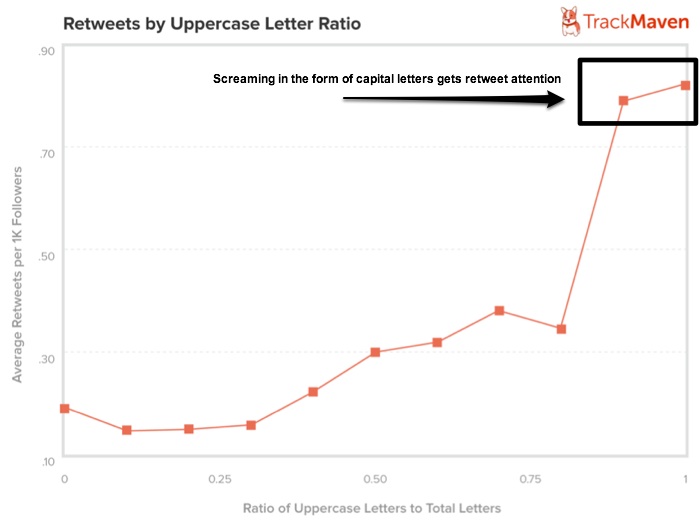 Following size has an impact on retweets

As shown by the clustering of orange squares near the intersect of the chart, there’s a relationship between the average retweets and the total number of followers:  smaller Twitter followings yield more retweets on average. (Note: Earlier research showed that Twitter isn’t a conversation.)

Since there’s limited data presented, one assumption is that these Twitter participants are more engaged with their followers, than people with large followings are or have time to be.

By adding a picture to your tweet, you increase your retweet potential since tweets containing images yield on average 0.404 retweets, about 3 times the number of retweets than tweets that don’t contain an image – 0.133 retweets. Note: It’s not only pictures that matter but also, the platform they’re from.

Seeing pictures in the Twitter feed, introduced by Twitter on October 29th, 2013, increases retweets to average of 0.496. This makes sense since people can instantly tell if they’d like to share the image with their followers. As with other forms of social media, reducing the activity required improves desired results. 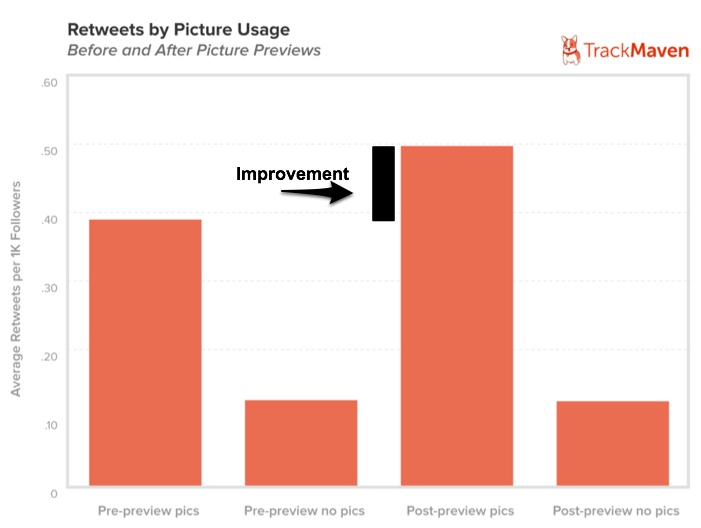 While most of the tweet creation and distribution happens during normal business hours, research shows that, depending on your objective, that may not be the most effective time to send your message.

To craft the most retweetable tweets, take these research findings into consideration. Also, leave at least 10 characters in your message to provide room for others to retweet it. But the main point is that you should always choose message clarity over additional mentions and hashtags.

What has your experience been with retweets?

Photo Credit: (c)2013 Heidi Cohen – Use permitted if you link back to this specific article.

6 Responses to How to Craft The Most Retweetable Tweets