Twitter is for sale, specifically you can purchase fake Twitter followers; a practice that calls into question the fundamental basis of this top social media platform and by implication other social media options.

Being real and transparent are at the heart of social media and engaging in practices such as buying fake accounts and shilling hurt both the social media ecosystem in general and your brand in particular.

Having a large Twitter following offers a sense of legitimacy, status and popularity. At first blush, buying cheap Twitter followers in bulk seems like a quick solution to building buzz, especially for startups on a limited budget.

But don’t think the public won’t find out. People watch Twitter accounts for major spikes in followers and once your public finds out, you can have a PR problem as Mitt Romney discovered during his presidential campaign. More importantly, it can be very difficult to rebuild your trustworthiness and repair your credibility, two elements that are critical on social media platforms.

Research by Carlo De Micheli and Andrea Stroppa estimated that fake accounts make up 4% of Twitter’s user base. De Micheli and Stroppa calculated there were about 20 million fake Twitter followers for sale by statistically excluding overlapping fake accounts on the twelve top marketplaces. Sellers reap between $2 and $36 per fake account. Not included in this research are the people who sell the ability to get your message in front of their followers (aka shilling).

Here’s what fake Twitter followers look like based on De Micheli and Stroppa’s research. In the Mercedes Benz chart, the spikes with a large number of followers are fake. 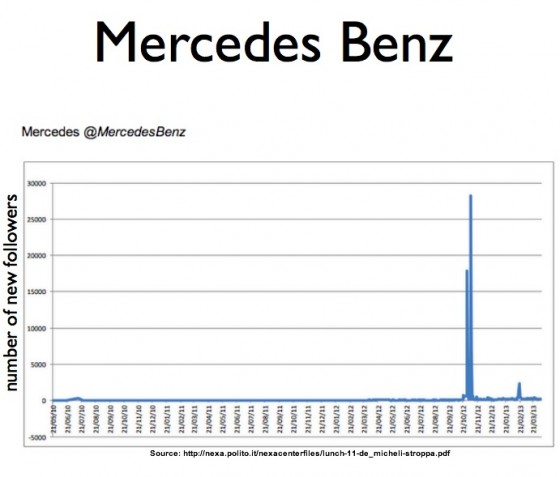 Last fall, an article in the New York TImes covered the many facets of fake followers. For a real eye-opener, follow their suggestion and search Google for “buy Twitter followers”. Here are the search results I got (click the image for a larger version.) 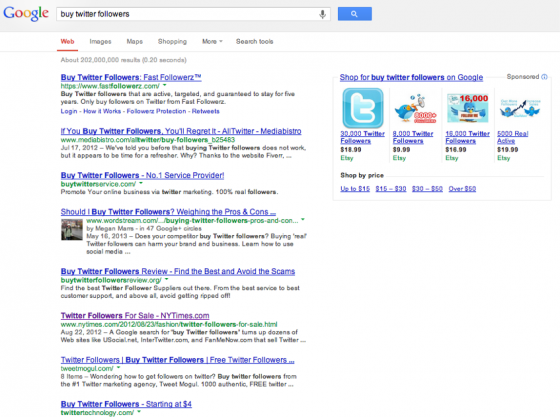 As a marketer, you need to be honest and transparent in your social media communications as with all of your marketing. Understand that if you cause followers to question the veracity of your Twitter and other social media interactions, they’re liable not to trust or purchase from you.

Assuming you’re not looking to purchase Twitter followers, there’s a good chance you have some level of empty or inactive accounts following you. The reality is that most fake accounts look like no one’s home. They’re eggheads! To determine if you have a problem with fake Twitter followers, use one of the free services such as Social Bakers. These automated services aren’t foolproof. Twitter accounts owned and used by real people can and do show up. While it may seem counter intuitive, getting rid of eggheads means that your messages are more effective which can help your social media ratings. 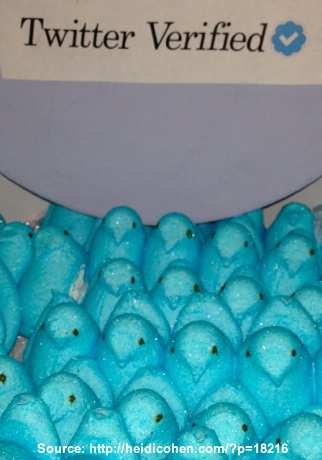 To help you develop a real following on Twitter, here are seven actionable marketing tips.

Twitter like other social media platforms requires that you be a real person with a human voice and emotions. It’s not about the number of followers you have but rather the quality of your followers and your relationships with them. Use Twitter as one piece of your overall social media strategy. 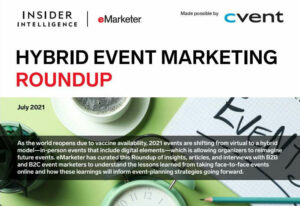 Curated by our friends at eMarketer, this collection of articles, insights, and interviews will help you understand what B2B and B2C event marketers learned from moving face-to-face events online.

Twitter verified: (c)2013 Heidi Cohen – Right to use image as is with link to this article. No rights to modify or remix image.

4 Responses to 7 Actionable Twitter Tips To Build Your Following