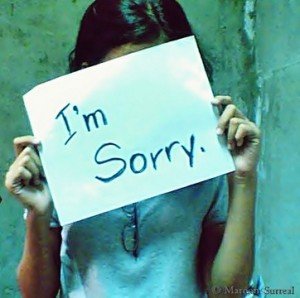 Is a tweet apology, the social media mea culpa, a suitable response to public gaffs and inappropriate comments? Before you answer, realize the ostrich approach of sticking your head in the sand and ignoring the problem is no longer an option in today’s social media wired world. This is a world where the average Internet user spends over one fifth of their online time on social media networks according to Nielsen.

While Twitter and other social media platforms can distribute your words of regret quickly, widely and painlessly, generally it’s best if the person who misspoke apologizes directly to the wronged party as soon as possible in as personal a way as possible. Depending on the parties involved, acknowledgement may be needed from a more senior corporate representative, like when you did something wrong as a child and your parents had to accompany you to reinforce your apology.

For example, after his band played an inappropriate introductory song for Michele Bachmann’s appearance on his show, Jimmy Fallon apologized via Twitter to his over 4.5 million followers. While Bachmann requested and received a public apology from NBC, at the time of this post, the YouTube clip has been viewed over 275,000 times.

If you’ve said or done something that’s gotten people upset, say you’re sorry as soon as possible so people don’t get riled up over your lack of response. Where appropriate use more personal communications vehicles than social media, but continue to monitor the situation to show that you’re socially aware and engaged.

Is there anything else that you’d add to this list? If so, what would you include and why?

One Response to Tweet Apology The Social Media Mea Culpa