Storytelling and Content Marketing: What Lin Manuel Miranda’s Hamilton Can Teach You That Will Keep Your Marketing Going And Increase Sales

Did you realize that Hamilton can teach you about storytelling and content marketing?

Miranda wrote the script, music and lyrics. Also, he played Hamilton in the Vassar Workshop, off-Broadway and initial Broadway run.

Opening on Broadway 5 years ago, Hamilton is content gold! It:

Beyond this recognition, Lin-Manuel Miranda brought Alexander Hamilton’s story and the play full circle. When President Obama invited him to visit the White House and to perform there.

From humble beginnings, Alexander Hamilton believed battlefield victory was necessary to build his reputation. According to Boston University Professor Brendan McConville: “[Hamilton] had been with [George] Washington as a key aide throughout most of the [American Revolutionary] war, but wanted glory on the battlefield”

So Washington appointed Hamilton to command a light infantry battalion in Marquis de Lafayette’s Division. In 1781, Hamilton helped lead the attack at the Battle of Yorktown. It became the war’s last major land battle.

While at the White House, Miranda treated the public to this Rose Garden performance:

What to create your own marketing success?
Then follow Lin-Manuel Miranda’s example and tap into the power of storytelling and content marketing

There’s science and art behind using storytelling and content marketing together.

The Science Behind Storytelling

Studies show that well-crafted stories about a person, even fictional ones, can increase oxytocin levels in the brain. So the story gains empathy and cooperation from the audience. 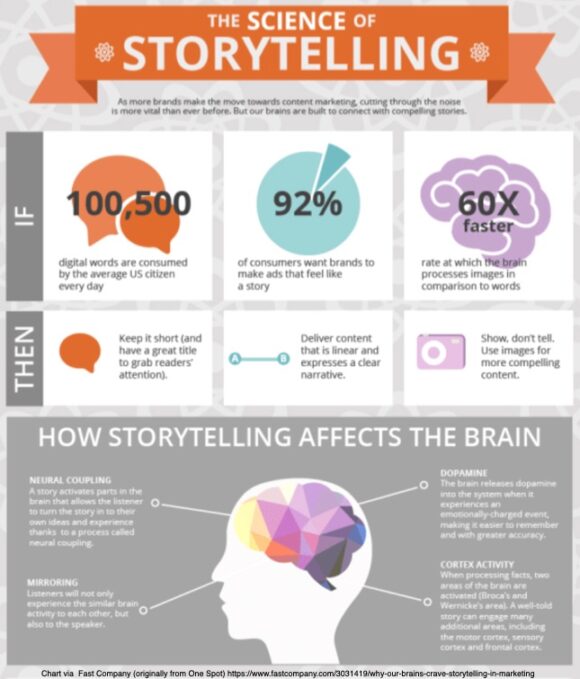 To create content marketing, journalists do a better job of converting facts and data into a story. (Hat tip to Ann Handley and George Stenitzer because they both started out as journalists.)

Because they use the “Five Ws” to answer:

Why?
While The Articles of Confederation of 1871 named “The United States of America.” And gave Congress the authority to make treaties and alliances, maintain armed forces, and coin money.

BUT:
The federal government could NOT enforce laws, levy taxes, and regulate commerce to repay its debts from the Revolutionary War.

At the 1787 federal convention, Hamilton made a 6 hour speech. He focused on his plan for a strong, centralized government.

AND people criticized him because they thought he wanted to create a monarchy.

So what did Hamilton do?
He created content to sell the new constitution to people to get it ratified!

With James Madison and John Jay, Hamilton wrote 51 of 85 essays defending the proposed US Constitution. This collection is now known as The Federalist Papers.

Why Stories Will Make You Improve Your Content Marketing

In Made To Stick, Chip and Dan Heath compare the power of stories to “ flight simulators for the brain.” Because stories provide context for readers and show them new relationships.

As a result, your ideas stick. Because people understand and remember them. So they leave a lasting impact and change the reader’s opinions and/or behavior. 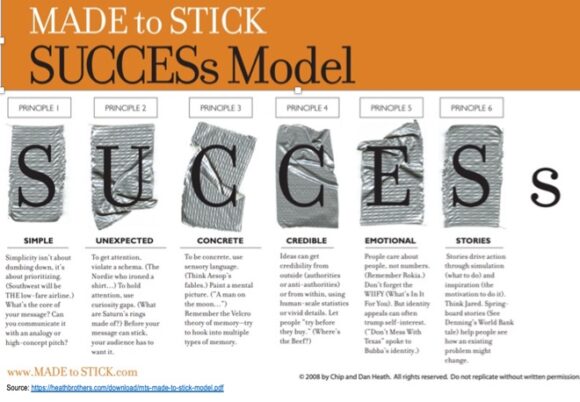 Here’s an example of how IKEA Singapore creates content marketing that integrates storytelling. 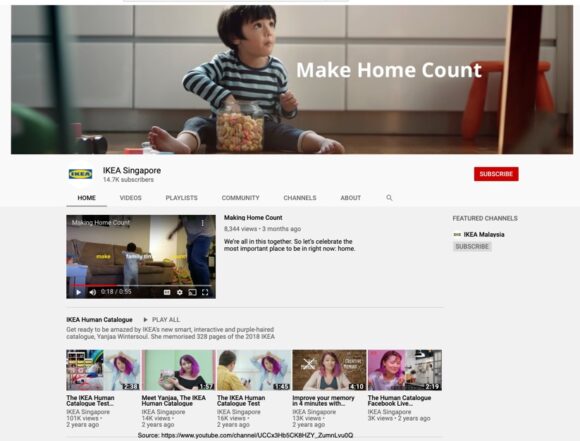 This YouTube video features a Shelf Help Guru, a play on self-help gurus. Using this title gives the audience a hint about how Fille Gute will tell this IKEA story.

This great example of using storytelling to support content marketing uses word play to make a funny, must-watch video. It has attracted over 650,000 views to-date.

To improve your marketing results, examine these 3 storytelling and content marketing lessons. They’re based on Lin-Manuel Miranda’s play, Hamilton.

1. Use Themes And Elements Of Storytelling In Content Marketing

To do this, Miranda tapped into human emotions to build drama and used a universal storytelling framework.

This use of story and content applies to all formats including: 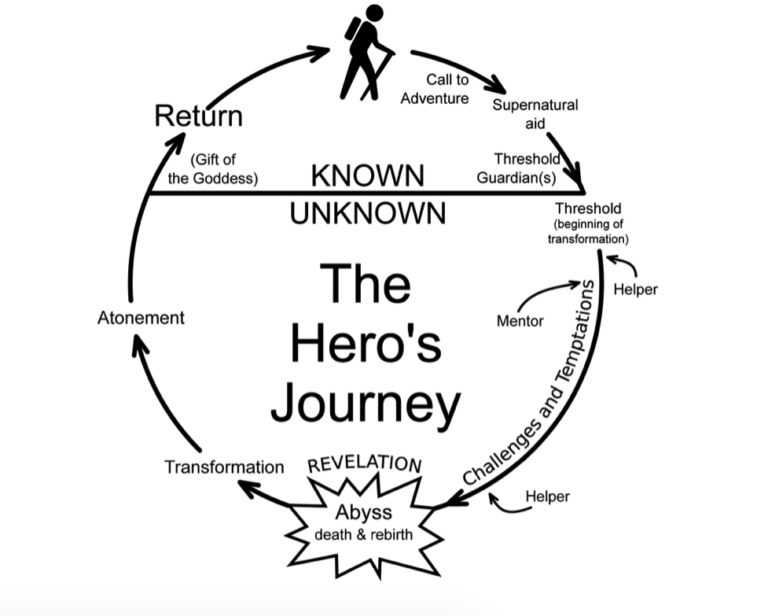 2. Why Pop Culture Will Make You Improve Your Storytelling

Beyond having a strong story structure, Miranda tapped into the power of pop culture.

To create the music for Hamilton, Miranda borrowed from hip hop and rap. This gives Hamilton a street-savvy voice of the people.

In addition, the music of Hamilton includes influences from R&B, pop and soul music.
As well as the traditional Broadway style show tunes audiences expect from a musical.

Unlike most quickly produced cast albums, the production of Hamilton was overseen by Questlove and Black Thought of the Roots. These musicians appear on The Tonight Show Starring Jimmy Fallon, the popular US late night talk show.

According to The Guardian:
“[This suggests] that its makers intended the Hamilton album to function as a standalone work, rather than a souvenir of a night out.”

Marketers pay attention:
Ensure that each version or format of your content marketing can to stand on its own.

As proof, the cast album has sold around 1 million copies in the US. And has crossed over hip hop and Broadway music lovers alike. This shows how content marketers can extend their audience by tapping into the power of pop culture.

But Miranda took his storytelling further:
He cast non-white actors as the Founding Fathers and others.

Miranda described Hamilton as about “America then, as told by America now”. In a post-George Floyd world, more businesses and marketers need to take a cue from Miranda.

3. How To Extend Content Marketing Life To Increase Your Results

Do you want your content marketing to stay visible and viable longer?
Of course you do!

To keep your content distribution going over time, use the TIPs Method (aka: Test, improve and promote!) 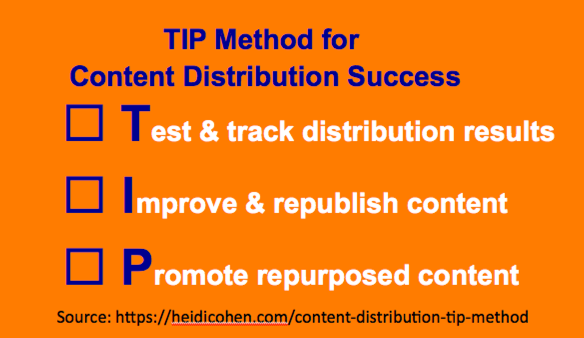 Beyond saving scarce budget, your best content marketing investment is to:

Also, start with a focus on one audience segment and content format. Then, as it gains traction, expand into new channels and formats.

Miranda’s play Hamilton followed this iterative content distribution approach. The play started off-Broadway at The Public Theater in February 2015. Based on that success, it moved to Broadway and has productions in other cities including Chicago and London.

Further, Hamilton was the basis for an award-winning cast album and a new feature film by Disney. 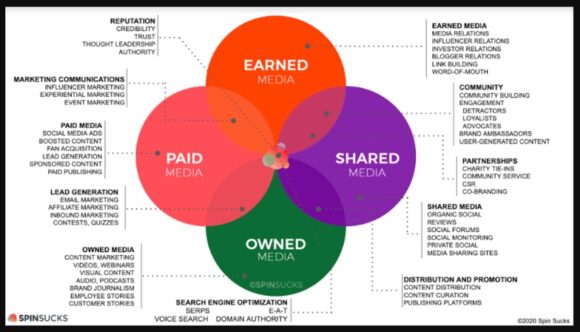 Want to give your content marketing more power AND attract more audience?

Because stories make your content more tangible and easy-to-remember.

Even better, you can borrow your story structure from existing sources. This does NOT mean copy!

Instead take Austin Kleon’s advice to “Steal Like An Artist.” While you can use someone’s work as inspiration, you must make it your own. For businesses, this means it must include your unique brand.

Also tap into pop culture to get inspired and help you to improvise.

Here’s a great example of how to improvise the music from Hamilton with The Muppets. According to a number of media outlets, this video is the work of a fan, Ricky Downes III, and he does all of the different character impressions.

Based on the YouTube comments, it’s difficult to tell if it’s a piece of fan love or a sneak peak at a future Muppet feature film. To-date, it has attracted about 600k views and 1,400 comments. Also, it has attracted press. In any case, it’s a content marketing success story.

So for maximum content marketing results, use these 3 storytelling lessons