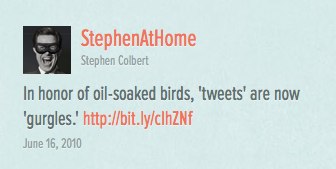 Always ready for self-promotion, Stephen Colbert jumps on every bandwagon. Colbert gets his viewers to raise their hands and vote. Therefore it’s no surprise that Colbert received the first Golden Tweet Award from Biz Stone for having the most retweeted tweet. Stephen Colbert tweets, we retweet.

As the high profile host of a second tier cable television show, Colbert leverages his platform to achieve a broad range of goals such as getting his name on NASA’s International Space Station and running for U.S. President complete with a commercial sponsor. If your organization is willing to let Colbert take center stage, he can be a powerful ally as he was for the US Olympic Speed Skating team. He filmed his show from the Vancouver Olympics as well as from Iraq with U.S. troops. Further he uses his platform to cross promote other forms of media, most notably Twitter and Facebook.

Colbert’s high profile tweet was retweeted about 44,000 times or roughly by 2.3% of his followers. Retweeting requires limited creativity or effort so it’s surprising that Colbert’s tweet didn’t have greater reach given the combination of his large follower base (1.9 million), the focus on a trending topic (BP Oil Spill), his content’s entertainment value and his use of related media to magnify his message.

What can marketers learn about using Twitter from Stephen Colbert?

Here are four critical factors to consider that helped Colbert get his highly retweeted content.

Most Twitter participants would have trouble reaching a fraction of the number of followers that Colbert has. Still, you, too, can leverage trending topics, create entertaining information and market your content.

Are there other lessons that marketers can take away from Stephen Colbert’s Golden Tweet Award? If so, what are they? Please share your perspectives in the comment section below.

For related stories, here are some other suggested posts:

One Response to Stephen Colbert Tweets, We Retweet