Social Media: Who Will Win the Battle for Mobile [Research] 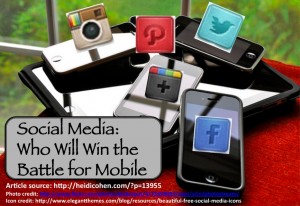 As the always-on, always in reach, real-time communications and media device, it’s no surprise  two-thirds of social media activities start on a smartphone, according to Google, Ipsos and Sterling Brand research.

When it comes to the battle for attention on mobile devices, mobile apps have roughly four users for every mobile web browser user, accessing the same or similar content from a social media platform, according to comScore.

To provide background and the basis for the insights, here are three charts. Please note that there hasn’t been more recent comparative information from comScore across all of these platforms since March 2012. 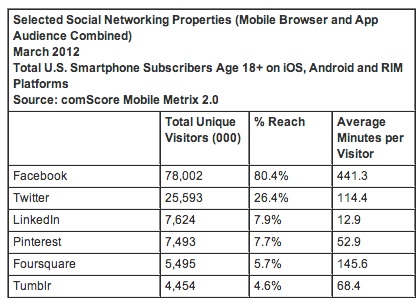 Here’s how eight of the major social media platforms stack up in terms of mobile options.

While Facebook’s mobile user base has grown in the past quarter, it’s critical to note that as of March 2012, Facebook had 78 million monthly mobile users who spent 7.3 hours each on either the mobile app or browser according to comScore. Further, this was almost an hour more than the time spent by other users. This makes sense since users can check Facebook via their smartphone during what would otherwise be wasted time. The challenge for Facebook and possibly marketers is that the social media platform isn’t monetizing these visits effectively.

Daily mobile use of Twitter grew 26% to 6.9 million in the six months ending in August 2012 according to comScore. On a monthly basis there were 29 million visitors who spent an average of 169.9 minutes or just under three hours per month. This makes sense because Twitter consists of short 140 character messages often containing links that lead to other sites. Interestingly Twitter’s mobile advertising is expected to be $129.7 million in 2012, ahead of Facebook’s $72.7 million according to eMarketer’s projections. They anticipate this lead will change in 2013. (Here’s the secret to attracting more Twitter followers.)

Instagram’s daily usage has grown more than sevenfold from 886,000 in March to 7.3 million in August 2012. In part, this is attributable to its high growth phase that may be aided by its acquisition by Facebook earlier this year. Daily usage of the photo enhancing app, has increased significantly – which is not surprising since it makes everyone look better and it’s a cheap and easy way of capturing moments and sharing them on social networks. Instagram is highly sticky in terms of time spent. Users spend an average of 257 minutes a month or over four hours. While its daily visitors surpassed those of Twitter, its monthly visitors are only 21 million about a third less than those of Twitter. (Here’s more Instagram research worth checking!)

Unlike Facebook, Google+ comes preinstalled on the 900,000 Android devices activated daily. This means that Android owners don’t need to think about downloading an app or using a browser to find Google+. About half of Google+’s roughly 150 million active users are mobile. This provides Google with a strong platform from which to grow their social media layer. Further, Google has optimized the Google+ mobile app by streamlining the number of mobile actions needed to accomplish tasks. (Here are eight other Google+ statistical research charts you need.)

Additionally, Google’s purchase of dining and travel content entities, Zagat’s and Frommer’s, when combined with its strong map app positions competitively against Yelp, TripAdvisor and Foursquare. From an advertising perspective, don’t underestimate the potential for expansion of Google’s mobile sales to provide a holistic customer experience.

As of March 2012, Pinterest had 7.5 million monthly unique visitors who spent just under an hour per month on the site or roughly two minutes a day. Pinterest has been 2012’s come-from-nowhere social media platform. You can expect this image-oriented social media site’s mobile audience to grow quickly with its recent introduction of new apps. This growth will be aided by Pinterest’s strong retail influence. (Check out Pinterest- The best New Source of Traffic and here’s more Pinterest data (19 charts worth!).)

Foursquare had about 5.5 million monthly mobile users in March, 2012 who spent roughly two and a half hours a month checking in. With a small but loyal user base that’s incented by deals even if they don’t socialize, expect Foursquare to slowly expand their local reach. Their challenge will come from users’ desire to share their locations, which is an issue for women, and how Google+ evolves and integrates with the rest of Google’s mobile platform.

Like other forms of blogging, Tumblr will take time to develop their mobile rasion d’etre, especially since it’s users are mainly under 25.

As the March 2012 comScore results show, LinkedIn isn’t an on-the-go type social media environment. Its business focus means that users are in an at-work mindset typically using desktop or laptop computers. Don’t expect LinkedIn to make any major moves on mobile platforms until they provide business people with a reason to check in more frequently for on-the-go reasons.

Given the explosive growth of the mobile device options including tablets, expect these trends to evolve significantly in the near term. This is because social media engagement is a top mobile activity due to the ease of checking in small spurts of time, either on-the-go or simultaneously. Further, other social media platforms have the potential to emerge from nowhere and existing platforms can change their positioning by adding popular new features.

What’s your opinion about the future of social media platforms on mobile and why do you think so?

3 Responses to Social Media: Who Will Win the Battle for Mobile [Research]