Social Media Marketing 2015: Where Is Your Audience? 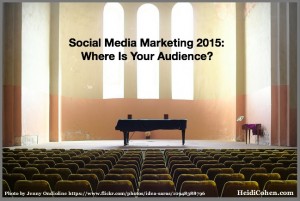 In 2015, social media is no longer just mainstream. 2015 Social media’s audience is mature in more ways than one.

Social media is not only mature in terms of its life cycle but also in terms of the age of participants.

Specifically, 56% of US online adults 65 and older or 31% of all seniors use Facebook according to Pew Internet’s “2014 Social Media Update,” based on research of the 81% of US adults 18 and above who use the Internet. (As a point of comparison, here is the social media marketing 2014 data. Also here’s 2015 US Media Consumption data.)

Social media marketing 2015: Where is your audience?

To succeed in 2015 and beyond, marketers must understand their audience and how they use social media as well as how social media platforms have evolved. (Here is related research from GWI focused on social media behavior in 2015. To check out where social media is headed, check out what US teens are doing in 2015 via connected devices.)

At a minimum, you’ll need to update your social media persona and use a mix of social media platforms. (BTW–Here’s the Ultimate 2015 Marketing Checklist to download.) 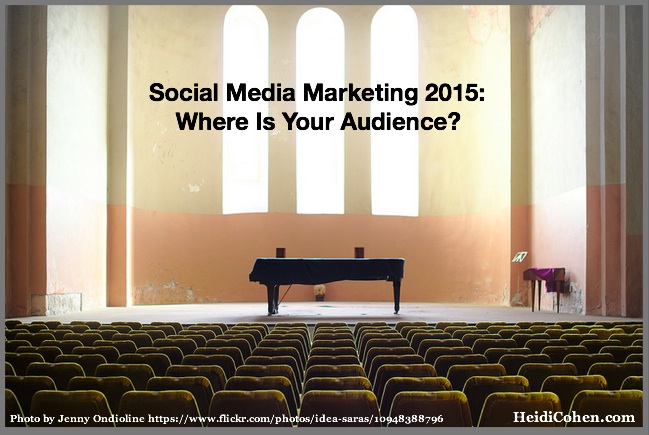 71% of US Internet users are on Facebook. Unlike other social media platforms that experienced high growth during 2014, Facebook’s proportion of Internet users remained flat with August 2013.

From a marketing perspective, this is an important question to answer since it yields insights into how deep these relationships are.

Primarily, people use Facebook to connect with people that are important to them in real life; who they view as peers with whom they’ll share unfiltered information. Hence the lower results for parents and children.

Among US Facebook users the median number of Facebook friends is 155, of which 50 are actual friends. These results fit almost perfectly with Dunbar’s findings, where the number of relationships an individual can maintain is 150 and close friends account for a third of that or 50. (Here’s further information on Dunbar via The New Yorker.)

As with other forms of social media and communication, Facebook attracts more women (77%) than men (66%). 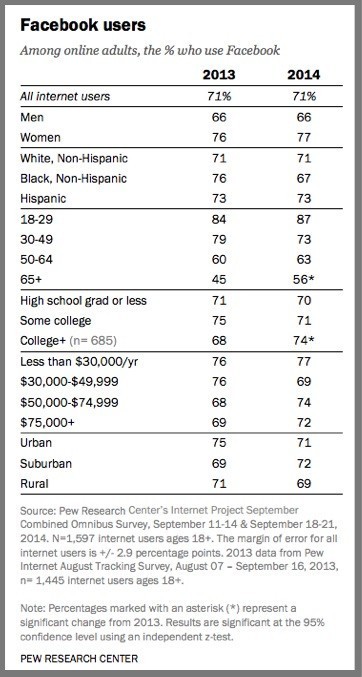 What does this mean for marketers?

This reduction in LinkedIn visit frequency points to the use of LinkedIn mainly as a job search tool.

It overlooks LinkedIn’s expanded power as a publishing platform and lead generator/business driver. In our 2015 social media predictions, we call LinkedIn, the must-be destination for businesses of all types. 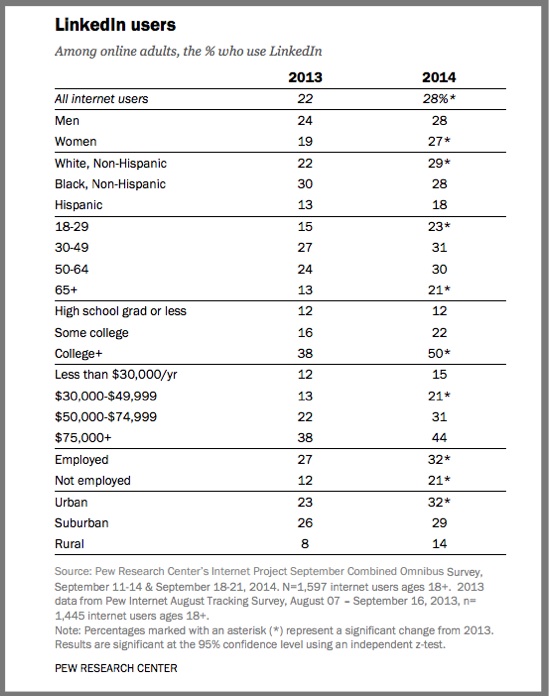 This shouldn’t be surprising since it’s the home of couch surfing for shopping inspiration.

Underestimate Pinterest’s ability to pull in shoppers and readers at your peril! It’s BuzzFeed’s number 2 source of social media traffic!!! 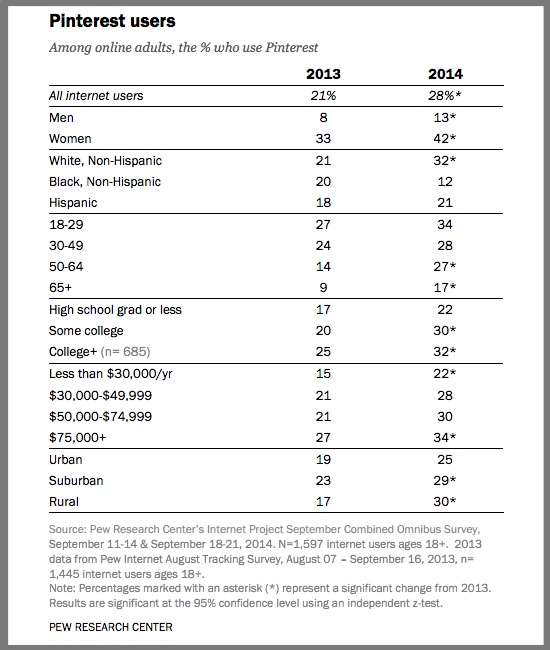 Social media marketers should pay attention to Instagram because it’s unlocked the secret code to interaction. In 2015 and beyond, this playbook will be re-written for video, which people find easier-to-understand.

Make your information visual, useful, consumable, and shareable on a smartphone.

Don’t assume that Instagram is just for consumer products. General Electric has been one of the early businesses to leverage the visual power of its B2B products and customers. 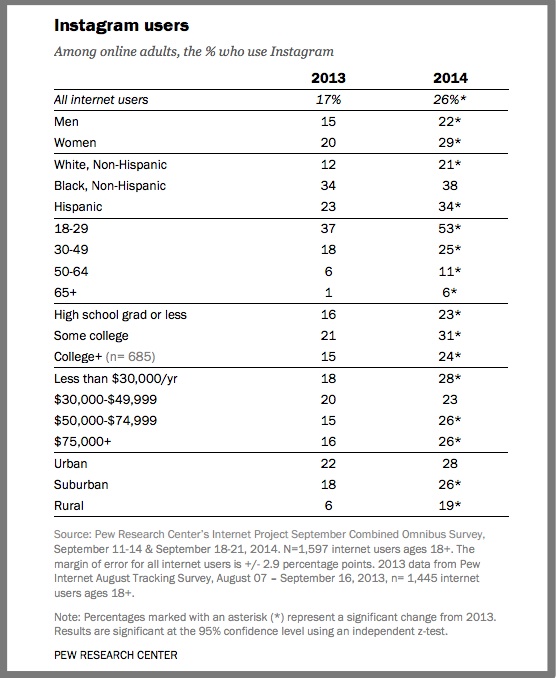 Here are 27 super easy tactics to boost your Twitter strategy. 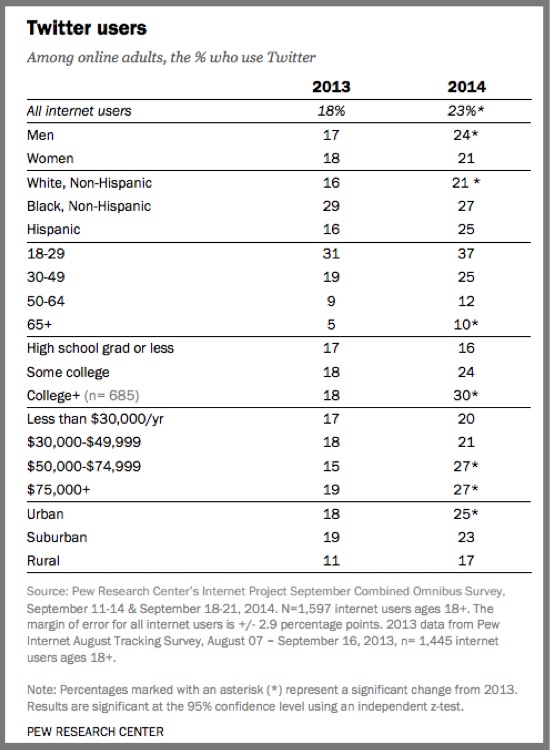 Multi-platform use is on the rise: 52% of online adults now use 2 or more social media sites. This is a significant 10 percentage point increase from 2013.

79% of social media participants who use only 1 platform use Facebook. 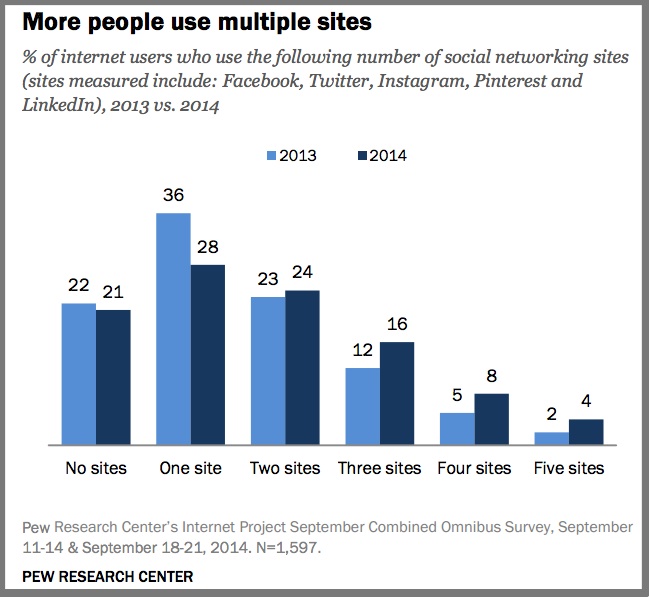 The percentage of Facebook users who also participate on another social media network has increased since last year. 94% of Instagram users also use Facebook. This is attributable to Facebook’s ownership of Instagram and to easy ability to share events via photographs with people participants are close to.

In terms of non-Facebook social media interaction, there’s significant overlap between Instagram and Twitter users. This is also attributable to the easy ability to broadcast your activity to others.

The bottom line: social media is here to stay.

Marketers must figure out where their audience is on social media. Then they must develop strategies to create tailored social media content and distribute it by platform.

To maximize your results, schedule your activity using a social media editorial calendar.

Where is your audience on social media in 2015 and what are you doing to engage them?

4 Responses to Social Media Marketing 2015: Where Is Your Audience?