Social Media: Do You Know Where Your Audience Is? [Research] 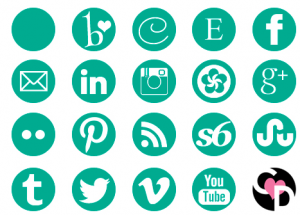 With social media consuming an ever greater share of people’s time, marketers are increasing their investment in social media marketing programs.

Research reveals that marketing dollars are following prospects and consumers to social media. The question is: are you investing in social media platforms where your customers spend their time.

New research from Pew Internet reveals the demographics of US social media participants.

1. Over 90% of brands surveyed by Strata, were using social media as part of their marketing in 3Q2012.

Based on these findings, about four out of five marketers were using Facebook, over a third were on Twitter, a quarter on Google+, about a quarter on LinkedIn and about a fifth were on Pinterest. 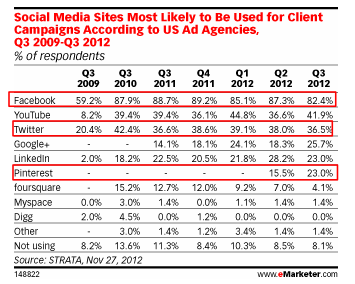 Actionable Marketing Tip: Focus your social media efforts where your target audience spends their time. To this end, create a marketing persona and a related social media persona.

2. Women tend to dominate social media as do those who are between eighteen and twenty-nine in general.

This makes sense since women tend to communicate more across devices and formats than men. College students grew up using social media unlike older age segments. Interestingly, in terms of ethnicity, Hispanics use social media at a slightly higher rate than non-Hispanics. Further, these demographics translate to lower household income. 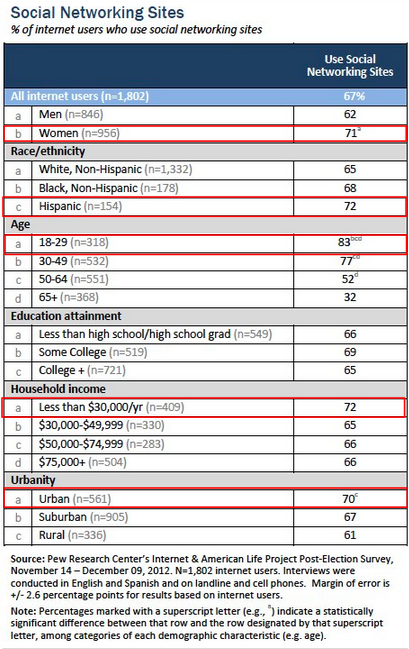 Actionable Marketing Tip: While this information provides a broad understanding of who is using social media, refine your understand of your specific target audience’s tastes because this is too broadly defined to lead to an effective program.

3. Facebook users tend to be female and young, specifically eighteen to forty nine.

This is a broad age band. Additionally, these participants tend to have some college education, live in urban areas and earn over $75,000. This translates into an ability to pay for consumer products. (For another perspective on Facebook, check out Global Web Index research and insights.) Further, other Pew Internet Research shows that participants take a vacation from Facebook. 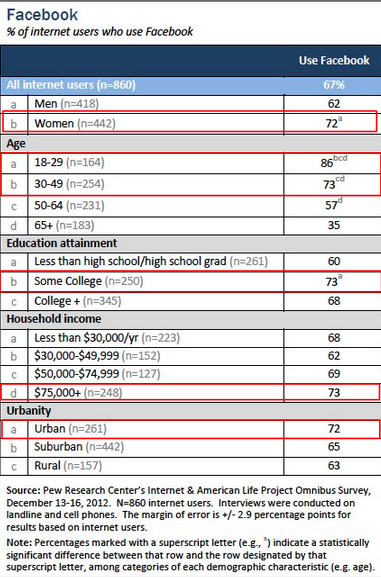 Actionable Marketing Tip: Facebook is no longer just for college students. (In fact, as any parent will tell you, it’s where their under 18 year old children are. Further, the parents have followed their kids onto the site to monitor what they’re doing.) With the right targeting, this group is worth reaching out to since they either influence or spend money on consumer goods. Further, use the combination of building a Facebook presence and social media advertising to maximize effectiveness.

4. Twitter participants tend to be young, African-American and urban.

Twitter usage is significantly lower than Facebook usage. It’s past its initial male early adopter phase but women still haven’t passed men based on this Pew Internet Research whereas research by Bevolve showed that women have passed men on Twitter. Both sources show that most Twitter users are a younger demographic. 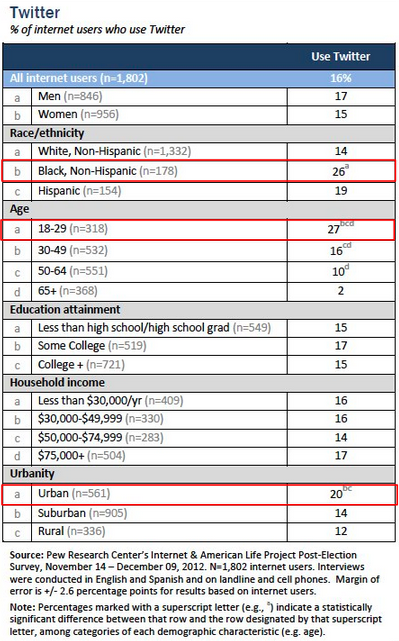 Actionable Marketing Tip: Use Twitter to support your message distribution and engage customers, especially for customer service and timely messaging such as travel and emergency communications. According to Hubspot research, Twitter isn’t a conversation! Be aware that Twitter, like other social media platforms, is not a one way broadcast medium either. This means keeping to a ratio of about one promotional message per ten messages about your customers for best results. (Here’s a primer on Twitter etiquette.)

5. Pinterest where women flock on social media (although there’s Pinterest research that shows the number of men is increasing).

Pinterest has experienced exponential growth in the past year that’s not to be overlooked. The Pew Research just gives a point in time snapshot that is misleading for marketers, especially those products provide visual eye candy such as clothing, food, weddings and home decorating. (Check out these  ten colorful Pinterest research charts to get more detail about this visually driven site.) 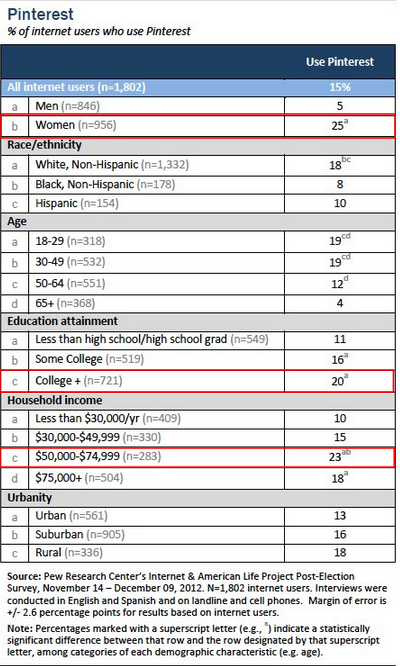 Actionable Marketing Tip: Get your visual on, even if your product or service doesn’t translate into images. Brainstorm other ways to present your information to attract attention with eye candy.

Tumblr has been a top ten site on Nielsen for the last two years yet many marketers haven’t taken the time to find out about it. As the Pew Research shows, Tumblr is for the under twenty-five set which may be why most marketers don’t pay attention to it. It’s a more visual form of short blogging. 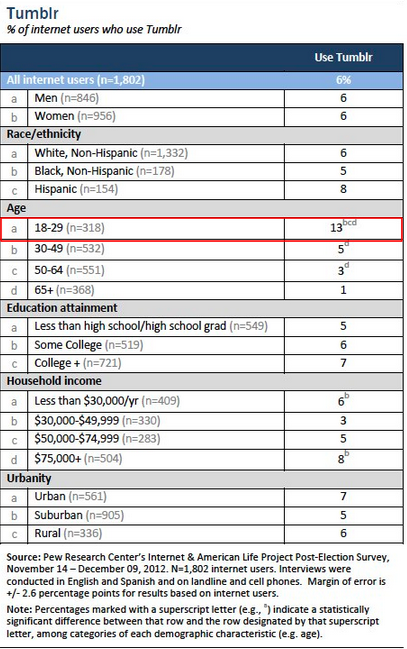 Actionable Marketing Tip: Show that you’re brand is hip and cool and get on Tumblr. It’s a must have for anyone trying to reach a 13-24 year old market. To get started, here are seven Tumblr tips with examples.

While Instagram is still growing and evolving, it’s gotten a lot of notice, especially after being purchased by Facebook for a hefty sum. (To put Instagram in perspective, here are seven other research charts explained.) In today’s social media world where photographs are easy-to-share social currency, Instagram provides the way to enhance your images.  (Note: Instagram is going through its growing pains and got a lot of users upset recently with an overreaching change of terms notice done Facebook style.) 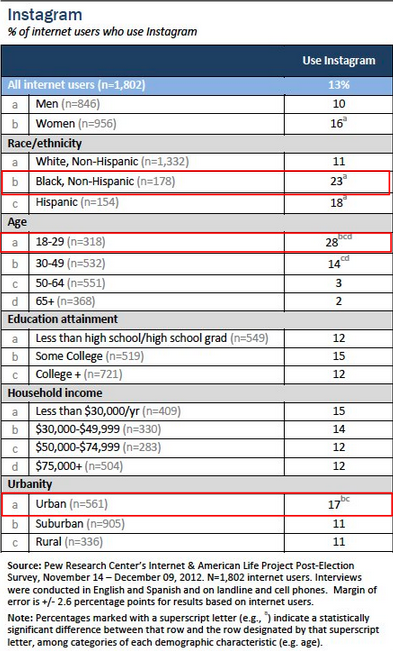 Actionable Marketing Tip:  Use Instagram to spotlight your products regardless of business type (B2C and B2B) since even GE’s highly technical industrial products are on this platform. It’s also a great way to engage and encourage your customers and the public. At a minimum, get onto this platform and experiment.  Here are five other Instagram marketing tips.

The biggest take away from this research is that social media continues to grow and evolve. It’s not just Facebook anymore! If you’re waiting for higher participation numbers, there’s a good chance you’re lagging behind your competitors.

What’s your interpretation of this research?

One Response to Social Media: Do You Know Where Your Audience Is? [Research]