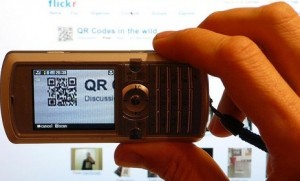 How to use a qr code

With increased hype and discussions, QR code usage has moved past its early adopter phase in the US. While QR codes are popping up with greater frequency on marketing materials, ads and other surfaces, much of the population still doesn’t know what they are or how to use them. (Here are twelve examples of QR codes in use.) Marketers want to know what’s the current penetration of the market that can use them and what are the usage forecasts in order to determine whether QR codes should be integrated into new marketing materials.  To help, here are 26 QR code data points complete with charts and analysis.

1. US Smartphone Penetration (via The Nielsen Company) 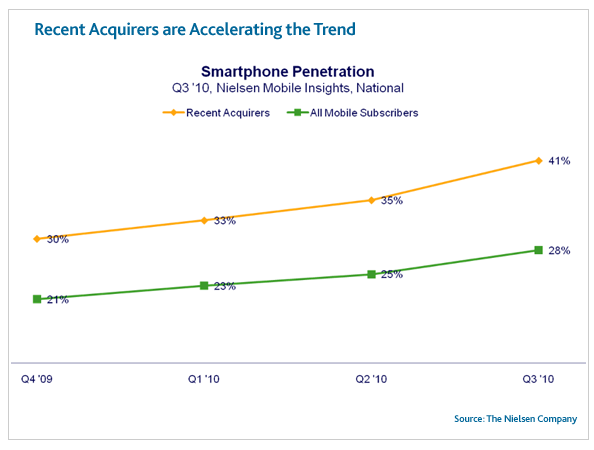 2. How US smartphone adoption compares (via comScore MobiLens)

To put US smartphone adoption in context, it lags the Spain, Italy and the UK according to comScore MobiLens. 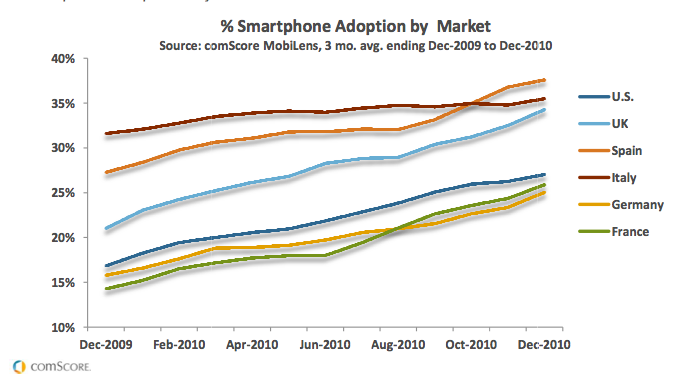 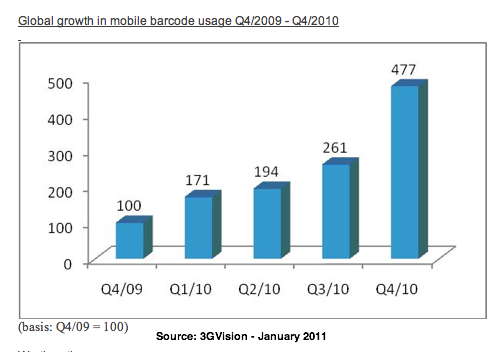 Notes on reporting methodology: To better understand this chart, here’s some background on the methodology. According to 3GVision, these reports are based on the total number of QRcode, Datamatrix and UPC/EAN scans as recorded by the i-nigma system during the period. Due to i-nigma’s worldwide prominence, these results are considered to be an indicator of global mobile barcode activity. Japanese mobile barcode activity, known to be ahead in popularity and usage, was excluded.

There was significant growth in mobile bar code usage from 3Q2010 to 4Q2010 across many countries. For the first time, the US was the largest country in terms of absolute numbers of scans. It’s important to note that, while smartphone penetration is about 30% in the US, it’s population size makes this large relative to other countries.

Barcode usage varies by type of smartphone. Based on Compete’s results, Androids lead the way. 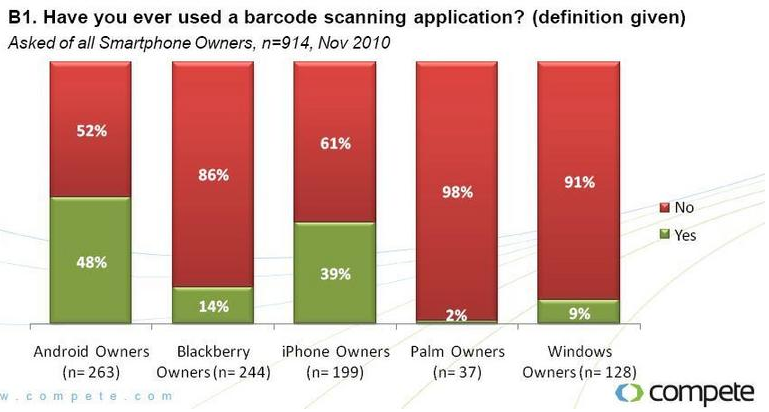 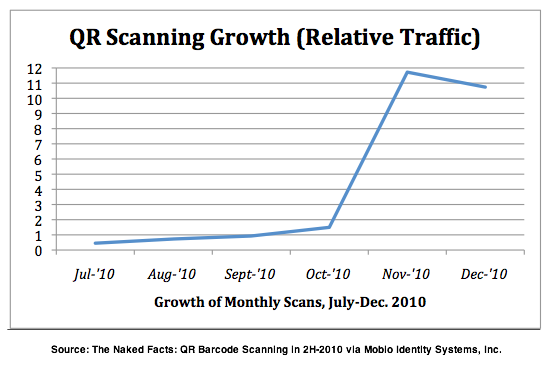 While the following ScanLife research taken from 4Q2010 doesn’t show its scale, it does reveal the relative difference between the use of 1D and 2D (QR codes) and shows that use of both formats is growing.  This data is useful since most of barcode scanning data co-mingles information about the two different types of codes. Higher scanning behavior was closely correlated with the holiday season when the increased use of 1D codes probably represents consumers scanning 1D UPC codes on product packaging. 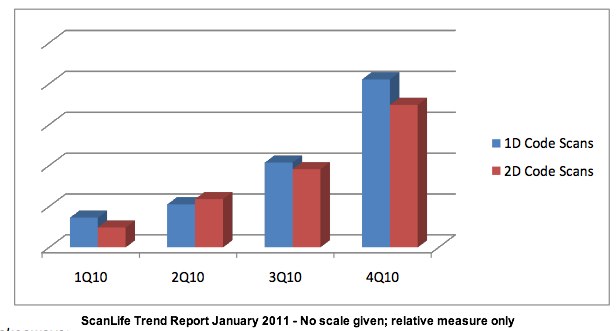 About two-thirds of US respondents have seen a QR code. Interestingly, this applies equally for men and women based on MGH‘s QR Code Usage research in February 2011. 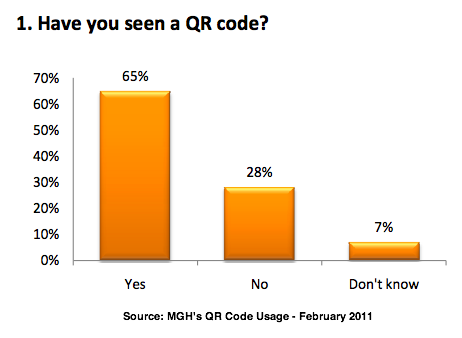 Of those surveyed, about half who saw a QR code, used it according to the MGH study. 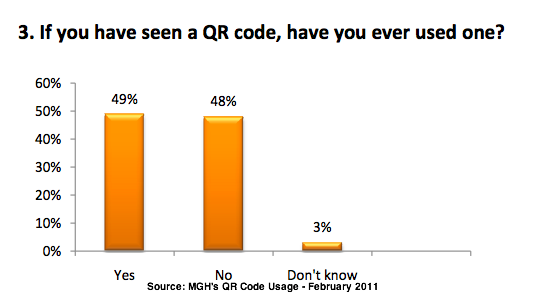 Respondents in the MGH study who had used a QR code were clearly looking for a deal or coupon or more product information. Combine this with the fact that shoppers tend to use their mobile phone when shopping. 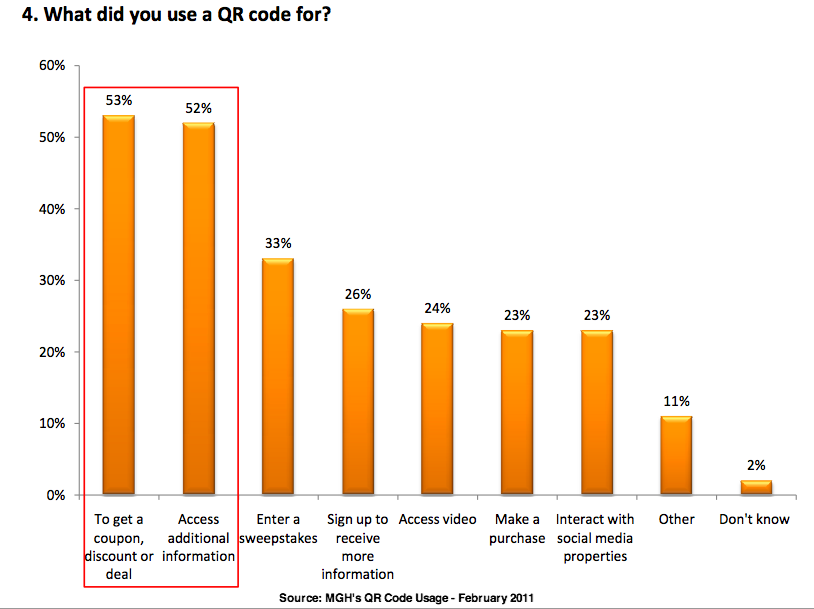 Roughly 62% of respondents had scanned a QR code two or more times based on Mobio Identity Systems, Inc.’s data. 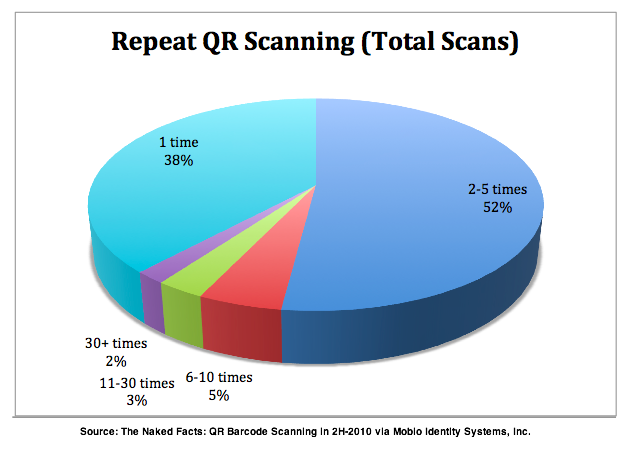 13. Where US consumers scan QR codes

US consumers scan QR codes on a variety of different media, where television and social media account for the lion’s share of this behavior, via Mobio Identity Systems, Inc.’s data. Roughly, 3 out of five scan from social media. 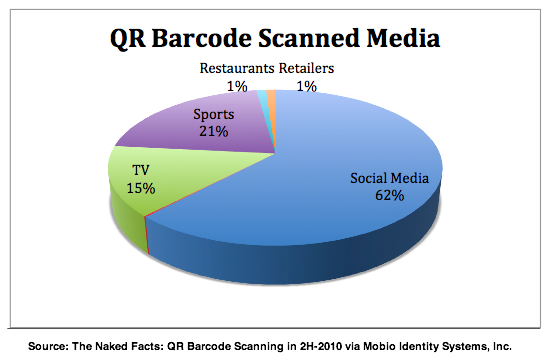 14. Why US consumers scan QR Codes

If you’re planning to add QR codes to your marketing, it’s important to consider what motivates prospects and customers to snap your QR code. Getting a discount or deal, entering a contest, getting additional product information or making a purchase are top on the list. Bear in mind that this is consistent with other social media and mobile actions. Therefore, while passersby need to understand that they’re looking at a QR code and how to use it, these hurdles can be overcome and are easily explained to prospects. 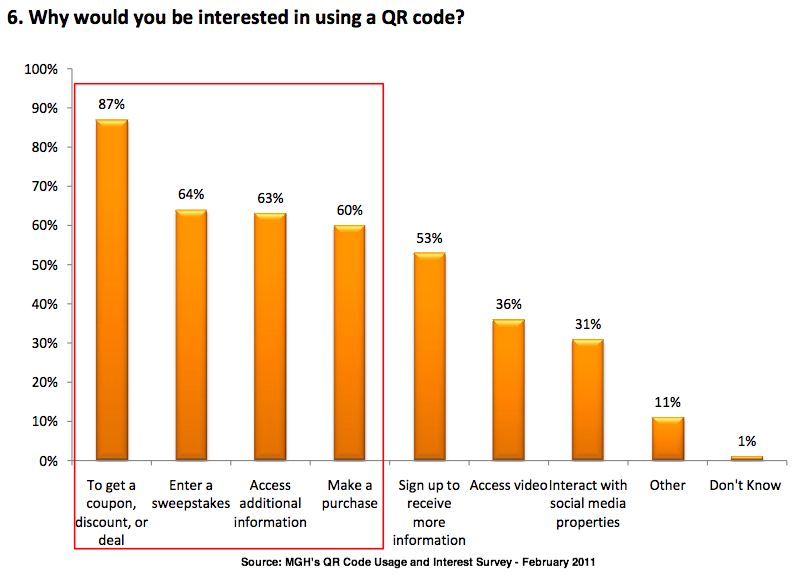 15. Are US firms using QR code US usage?

QR codes are not limited to small businesses. 22% of the Fortune 50 use QR codes according to 2010 Burston-Marseller research.

QR code usage is greatest among individuals between 25 and 54 years of age based on Mobio Identity Systems, Inc.’s data accumulated from consumer QR code scans in North America. ScanLife’s data show that scanning increased 25% among the 35-54 age group in the US since their last report reinforcing the idea that QR Codes are moving past the early adoption phase. 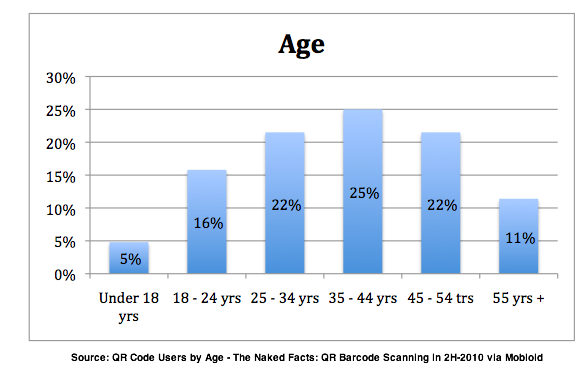 17. US QR Code usage by gender

About two-thirds of scans are by women, often heads of households – based on Mobio Identity Systems, Inc.’s QR scan data in North America. They’re interested in QR code scanning to get product information, enter contests and make smartphone purchases. Further. ScanLife’s data show that scanning increased 13% among US females. 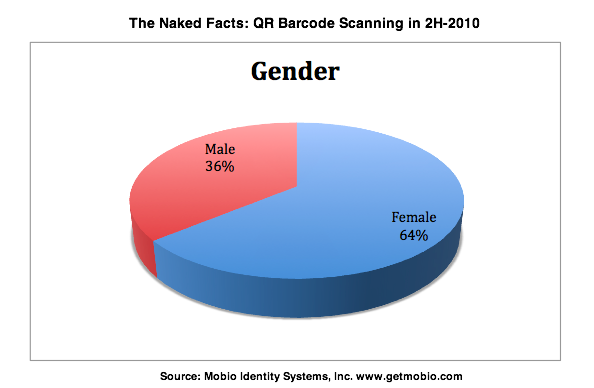 UK based Dubit Research questioned 1,000 teens aged between 11-18 years of age with an equal balance between gender and age for their Direct to Youth Digital Omnibus. Here are the salient findings related to QR codes. (Note: no charts are available for Dubit data.)

72% of teens surveyed either didn’t have or weren’t aware that they had the software to read QR codes.

When shown a QR code image, only 43% of respondents correctly identified that it could be read by a mobile phone and 19% admitted not knowing what it was.

33% per cent of those questioned correctly identified the image as a QR code. 22% believed the image was called an RFID tag and 12% labeled it as an infograph showing that education is needed in this mobile-savvy market to increase QR code awareness and usage.

21. Roughly one in five teens have used a QR Code

19% of teens have used software to read QR codes and 74% of users thought it was worth the effort.

While QR codes are past their infancy in the US, they’ve entered a high growth phase that’s causing them to attract a lot of attention, as shown by the Google Trends chart.

This is supported by an interesting adaption of Gartner’s Hype Cycle chart by Roger of the 2D Code. Looking at this chart, you’ll see that the US and Europe are on the upswing of publicity. This trend is consistent with the Google Trends chart. 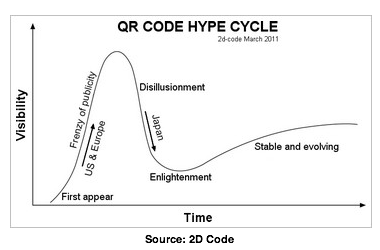 The future of QR codes

To understand how QR Codes will be used as the market matures, let’s examine the Japanese market, which is more mature in terms of QR code usage, to get marketing insights. Based on NetAsia Research June 2009 study via 2D Code,

76% of the Japanese surveyed know they have the ability to access QR Codes. This means that roughly three quarters of those surveyed know what a QR code is when they see one, understand how to use it, and have a smartphone with a QR code reader installed.

Although individual usage varies, the average scans per week for those surveyed was 1.24. To put this rate in context, consider the percentage of readers who click-through on online advertising or use the URLs plastered on billboards, ads and packaging. Since viewers can’t discern the information contained in a QR code the same way that they can with a URL, scanning is probably higher.

Among the top reasons for scanning are to use a coupon (31.6%), to get a special promotion (30.9%), and to obtain more product information (22.7%). Not surprising, these reasons are similar to those that U.S. consumers give for following a brand on social media platforms.

Remember when incorporating QR codes into your next marketing and/or communications project, it’s important to supply viewers with a call-to-action and information regarding how to download a QR code reader and use the QR code since it’s still early days.

Have you scanned a QR code? If so, what were your opinions about the experience? Have you considered integrating QR codes into your marketing plans? If so what do you plan to do and why?

Here are some related columns that you may find of interest.