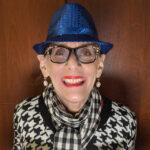 To be precise I’m in Arlington, Virginia at Voice22 where I’m speaking on Wednesday!

My husband and I took an Amtrak train from the new Moynihan Station in New York City. While it’s linked to Penn Station, It’s one of the newest sites in New York City. It’s just east of the tony Hudson Yards District where hot new restaurants and shops are starting to stake out locations.

Inside Moynihan Stations, the silver-colored metal bends across the top in arches. 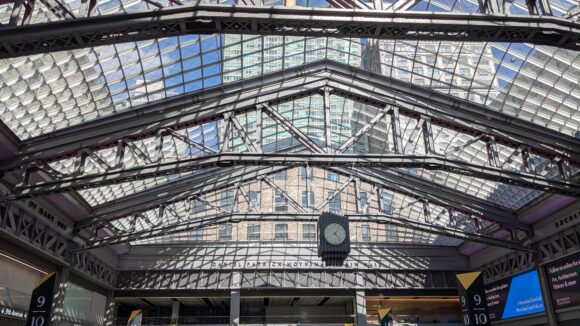 Amtrak’s Moynihan Stations isn’t like Grand Central Terminal. That is situated across from two of the city’s most notable examples of Art Deco skyscrapers, the Chrysler Building and the Chanin Building.

Under the watchful eye of the statue of Cornelius Vanderbilt, passengers walk through Grand Central’s refurbished beauty as if they were ready to walk onto a train in a classic movie. 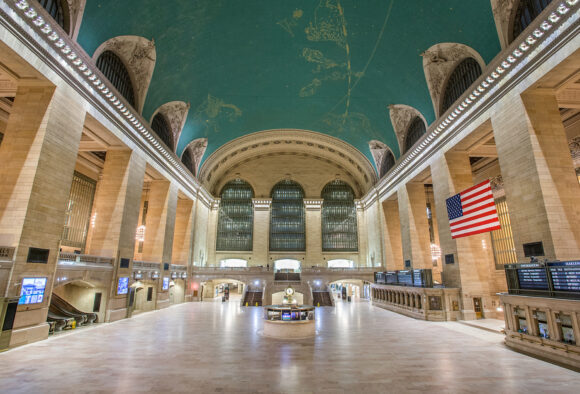 By contrast, Moynihan Station has a fresh new feel to it. It’s filled with upscale eateries and shops. Everyday local subway riders mix with commuters and Amtrak travelers.

We could have taken the short flight to Ronald Reagan National Airport, which happens to be close to our Arlington hotel. But once you add the additional time and cost for getting to the airport, going through security, and being there at least 60 minutes in advance, it amounts to more time and inconvenience.

Instead, we get our breakfast treats for the train and head to the Red Cap area, a traditional area for train porters that still remains. For me, it feels like an affordable luxury before we board the train.

Further, we get to experience Autumn’s changing scene as the train rolls through historic areas between New York City and Washington, DC.

Since I’m away from my office this week getting together with my voice and conversational AI besties from around the world, this week’s letter will be shorter than usual.

Marketing Lesson of The Week

Between New York City and Washington, DC, Amtrak offers coach and business class options. It has a faster service, known as Acela, that shaves roughly a half hour off of the regular 3 ½ hour trip.

Of course, this time savings comes with an increased price tag. In addition, it offers only business and first class options. Not being in a rush, my husband and I opted for regular coach seats.

Like airlines, the price of train tickets changes as you get closer to your departure date and how full the train is. (BTW, if you totally miss out on train tickets, there are bus options at even lower prices and often more frequent departures.)

Having made our plans in advance, I didn’t think about the Amtrak tickets until I received an email from them earlier this week. The subject line read: “Act now to upgrade your upcoming Amtrak trip”.  The email offered me the opportunity to upgrade my coach tickets to business class by bidding for a better seat.

As you can see from the image, it looks like you have the ability to get a better seat using Amtrak’s BidUp system. With the big Amtrak blue button staring at you, who isn’t going to see how low a price they can get for a better seat? 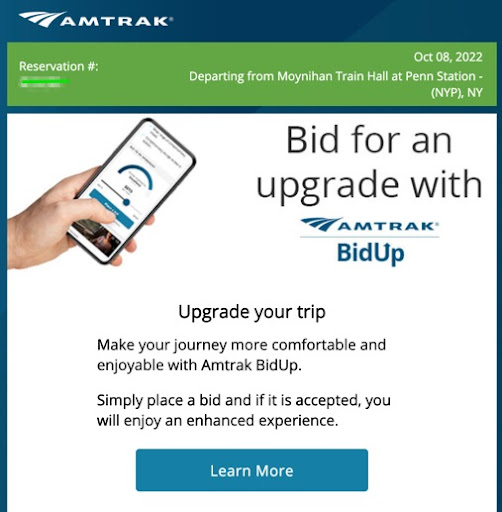 Below this image is text including this message: “Starting from $37 per passenger”

At $74, I started to think about spending the extra money to have more space. (Of course, it would be $148 for the round trip.)

At least until, I clicked through. Then I saw the Offer Amount Rator. It showed that I needed to bid about $50 per ticket per way to get upgraded. Now I’m looking at spending roughly another $200 and that no longer seems like a very attractive deal. 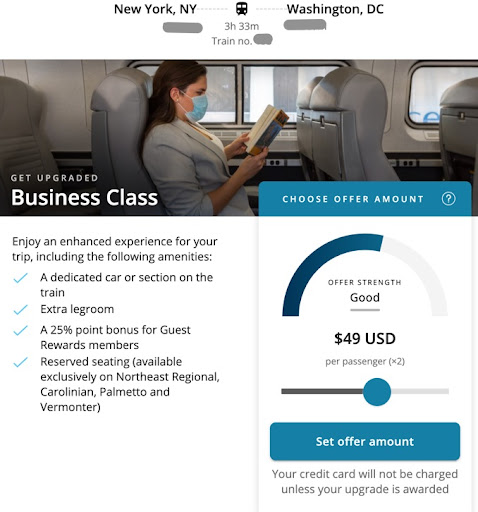 Amtrak’s BIdUp Rator shows current amount to pay for an upgrade in class.

While you are probably not going to be taking Amtrak in the near future, many airlines and other travel services use a similar form of getting passengers to increase the size of their purchase by purchasing a variety of different perks including seating space, boarding position and food.

During our trip to Southeast Asia in 2019, I was surprised to discover that VietJet, a local Vietnamese airline, offered a full catalog of items during the flight. The stewards spent time talking guests through their different purchase options. 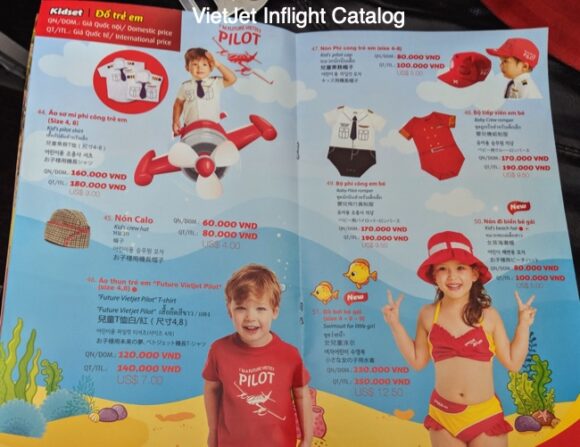 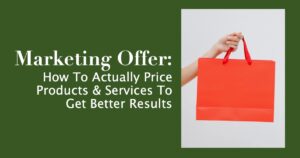 In the past year, the use of smartphones and other voice-enabled devices by Americans over 18 has increased significantly. (Source: Edison Research 2022) On average about 3 out of 5 Americans have listened to voice on any device.

What’s more important from a marketing perspective?
It’s NO longer just smart speakers; it’s a variety of devices used by an individual or a group of people at the same time.

Bear in mind:
Not all voice activity has a marketing implication! For example, “Google turn on the lights”

It’s no surprise that smartphones have the lion’s share of voice usage because they’re owned by 90+% of the population and don’t require internet access (which can be a location or income deterrent.) 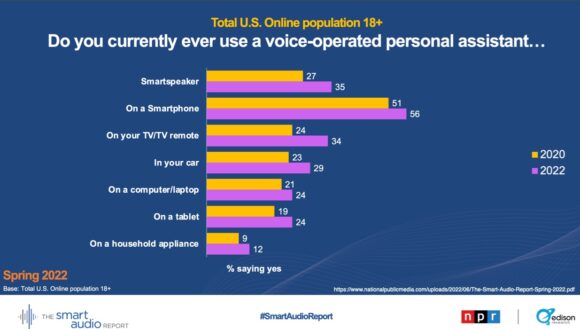 Also of interest is that smartphone usage in the US has increased to about the same amount of time as watching television in 2021 or roughly 4 ¼ hours per day. On average, people touch their smartphones 58 times per day; that’s roughly 5 times per hour. (Source: Visual Capitalist 2022)

While radio listening has decreased by a fifth, people still spend about 1 ½ hours per day listening to this pre-television device. Of course, the number of listening options continue to increase with streaming services and others.

What does this mean for voice marketers:
Don’t rule radio out as a distribution channel!

It can still provide a useful forum for PR and other types of shows. For example, when my husband and I were in Arizona last May, we listened to a local station near the Grand Canyon that provided historic stories and local information sponsored by local businesses. 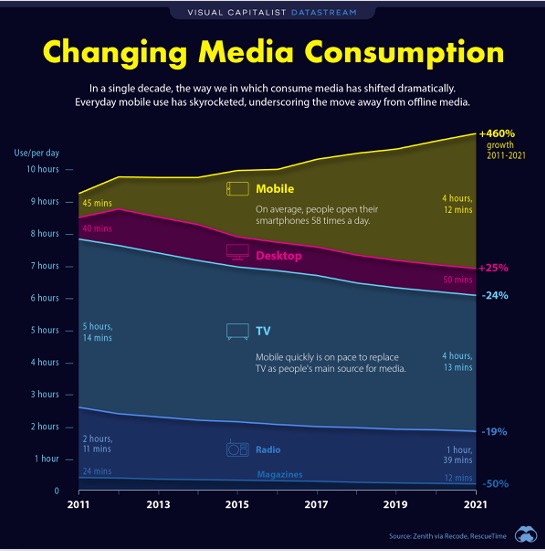 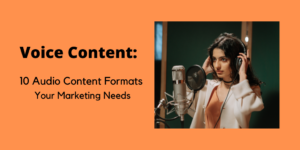 Part of the problem according to Deborah Borda, president and CEO of the New York Philharmonic was (Source: NPR)

“When the hall opened, the boards of directors of both the Philharmonic and Lincoln Center decided they wanted to have it the same size as Carnegie Hall. So, they put in 2,800 seats when it was designed for 2,200 seats.”

Despite several renovations, the music hall never attained its true potential. Fortunately, the music hall was able to take advantage of the pandemic to hire over 6,000 people coming from diverse minority- and women-owned businesses to build the $600 million project.

The musicians are excited about the change. As Borda says, “[T]he hall is like an instrument, and the New York Philharmonic is learning to play its new instrument.” The stage was created to move sections of musicians up and down so they can see the conductor better.

The honey colored wood of the interior adds to the warm experience for music fans. In addition, David Geffen Hall was created to allow people to watch concerts for free via a screen in the lobby and outside a studio near the street.

To create a great customer experience, you have to examine what you’re doing from a 360 degree perspective. So it’s not just for your best customers, it’s for everyone including your employees, investors and local community.

Since I’m presenting on Voice Marketing at Voice22 this week, I’ve curated some of the most useful articles on the topic to help you.

Voice Marketing: The How To Guide You Need To Be Competitive

Voice Marketing Business Case: What You Need To Know That Will Make Your Management Agree

Big shout out to CustomFit.ai for including Heidi Cohen in their Top Digital Marketing Influencers to Follow in 2022 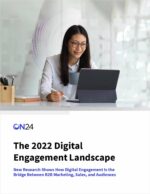 Marketers and salespeople know engagement is a must in today’s digital environment.

The Digital Engagement Landscape: Why Digital Is Your Bridge for Bringing Audiences, Marketing and Sales Together, investigates what people actually think of digital engagement and identifies improvement opportunities for organizations. [This eBook is offered free by: ON24, Inc.]

Plan Ahead: Mark Your Calendar 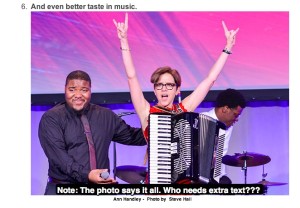 Ann Handley brings B2B back to Boston with 49 Sessions. 4 Keynotes and shenanigans!

Organized by Rand Fishkin and his team, this event won’t be recorded.

If you don’t have the budget to attend a conference IRL, check these tips: 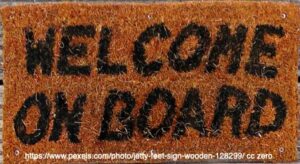 If you enjoy reading the AMG Newsletter,
please forwarded it to your friends and colleagues.

P.S.: Want Heidi Cohen to contribute a quote or other commentary to your next article, presentation, video, research and/or book? Then hit reply to this email and ask.