What Would You Give Up To Keep Your Smartphone?

Mobile App Research Reveals What You Need To Know 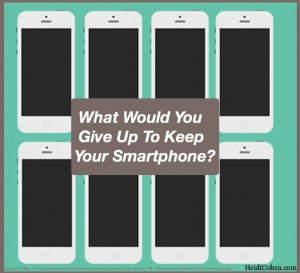 Smartphones are the center of our 21st century lives.

47% of Americans can’t go more than 24 hours without their smartphone according to BankAmerica research.

Sorry television, coffee and social media–BUT smartphones outrank you in terms of daily necessity! Americans grade smartphones on a par with deodorant and cars.

Give me my smartphone!

Americans would forgo a number of personal pleasures rather than give up their smartphones. 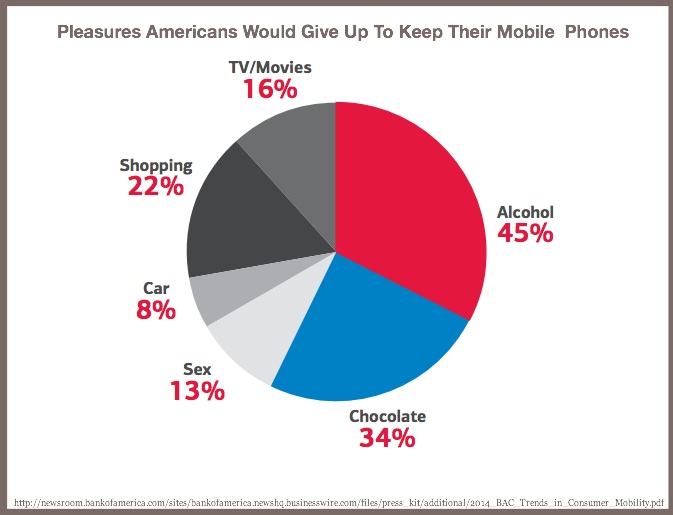 While smartphones are important to us, it’s mobile apps that transform our smartphones into the powerful tools we can’t live without.

To motivate prospects to find, install and use your mobile app, it must fulfill a specific need and provide real value. NOTE: Don’t underestimate the value of saving users time. Remember – mobile app utility is about your users, not your programmers.

Smartphones: Where we spend our time

US consumers spend 2 hrs and 42 minutes per day in 2014 on a mobile device according to Flurry Analytics. A 4 minute per day increase over 2013 or 2.5% year-over-year. 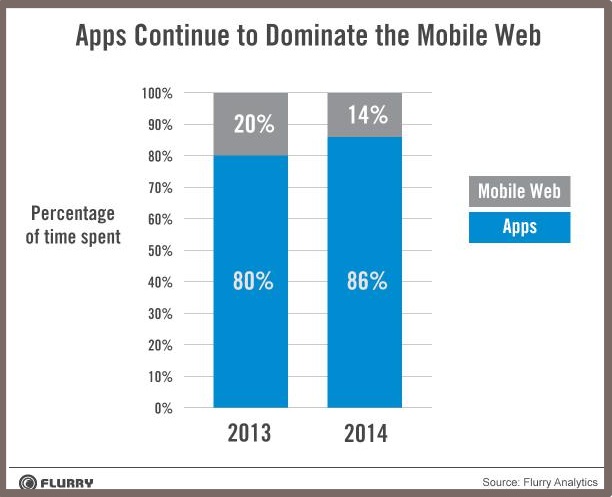 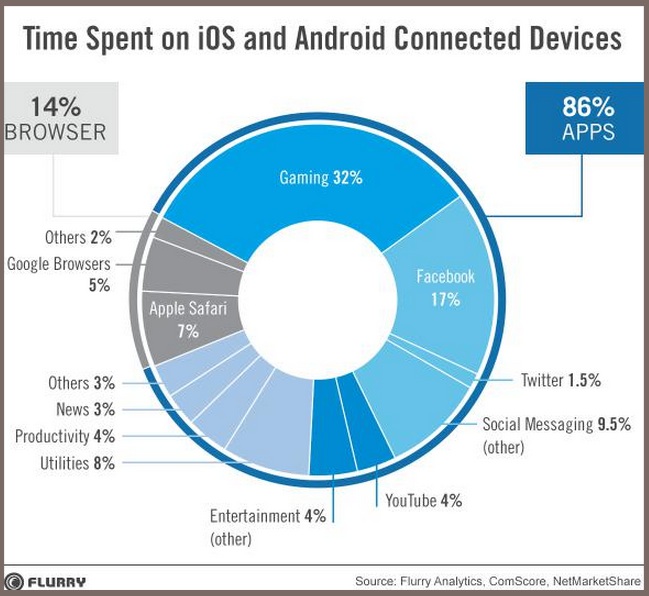 What’s missing from this analysis? Time spent managing email. It may be incorporated in other categories.

Like it or not, your mobile app influences how your audience perceives your brand.

Maximize mobile app screen real estate with images and to a lesser extent prices since space and attention are LIMITED. Offer quick and accessible alternative views including the ability to zoom in and out to imitate an in-store experience.

Reduce text to the bare essentials in your mobile app. Most people don’t focus on it. 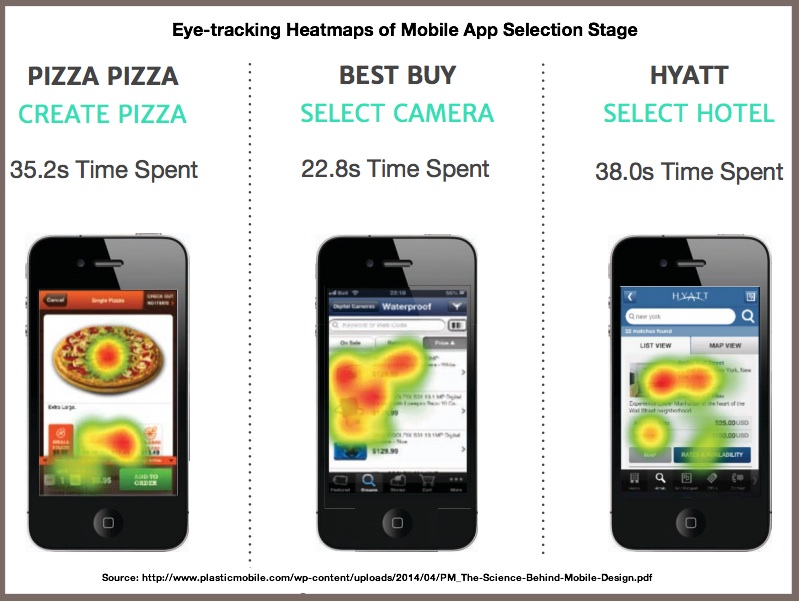 Minimize mobile app load time or risk app abandonment! Ideally app load should be less than 5 seconds. Avoid delays throughout the purchase process, especially checkout where you risk loosing the sale. Only use rich content when absolutely necessary because it slows app performance. 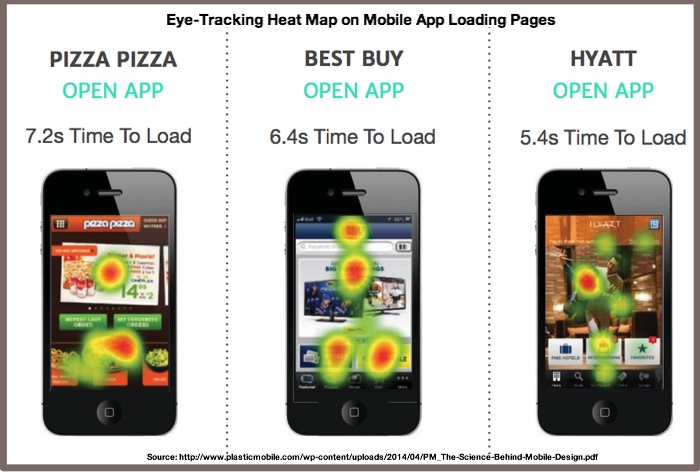 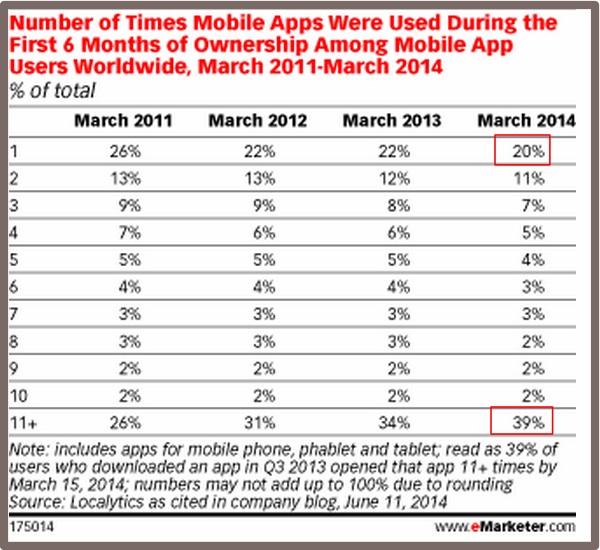 There are 6 main forms of mobile app monetization. Of course, your mobile app may exist solely to drive branded content engagement.

The freemium model is the dominant form of monetization based on mobile app research by IDC and App Annie. 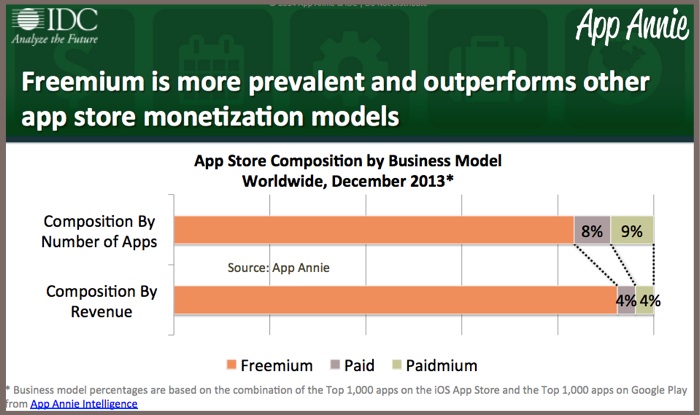 The sweet spot for paid apps is between $2 and $6 based on IDC and AppAnnie research. 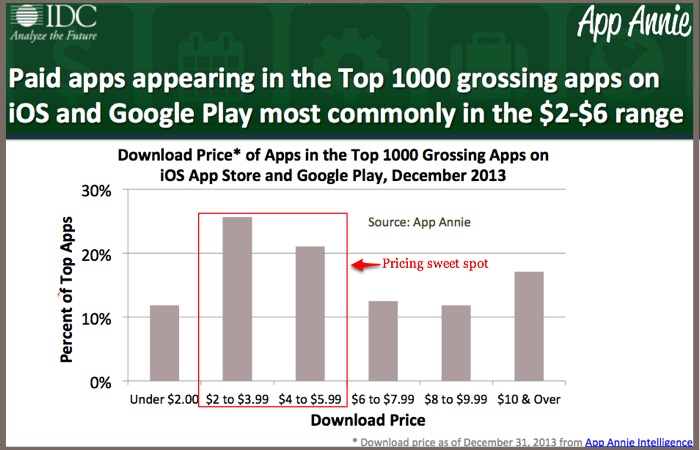 Mobile app advertising improves with increased app usage. Like other forms of media as your mobile app attracts a broader user base, the better you can monetize the traffic. 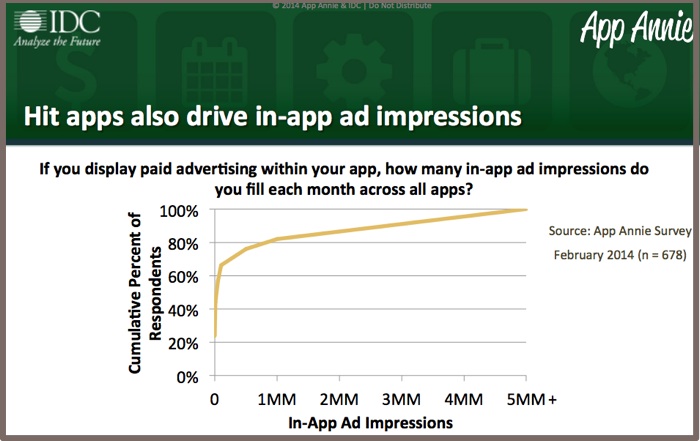 Face it—smartphones are a part of our 21st century lives as humans and marketers.

To reach your target audience where they spend their time, you need a mobile marketing strategy that includes mobile apps.

But developing your mobile app is only the first step of the process. You must build your audience and keep them returning to use your app.

To this end, provide REAL value for your users.

What has your experience with mobile apps been as a marketer?

3 Responses to What Would You Give Up To Keep Your Smartphone?