Is Facebook Still Cool (and Why Should Marketers Care)

At the core of Facebook’s target audience, Gen Z, tweens and teens born after 1995, are mobile mavericks who use social media to connect and communicate with each other.

While overall social media usage is declining slightly in the United States, this behavior is more acute among Facebook participants especially teens.

About two-thirds of US adults participate on social media platforms and on Facebook specifically as of December 2012 according to Pew Internet Research presented in February 2013.

Since 2005, overall social media use has grown, peaking in mid-2012 when it started to decline slightly across all age groups except 30-49 year olds. The 18-29 year old segment has had the highest rate of growth. 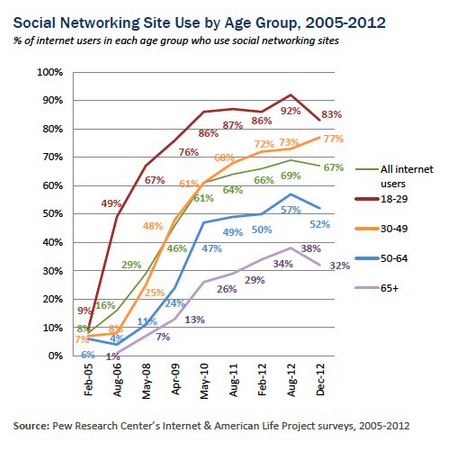 Actionable Marketing Tip: Continue to incorporate social media into your marketing mix to build your brand and become part of the purchase decision process. While social media has lost some of its luster, it remains an important means of communicating and engaging with family, friends and colleagues.

Of the major social networking sites, Facebook is loosing ground, roughly one out of ten teens, according to “Taking Stock With Teens” by Piper Jaffray, a semi-annual survey that gathers input from 5,200 teens with an average age of 16.3 years.

Only a mere one third of teens consider Facebook the most important social network. While most of the social networks haven’t gained much ground during the past year, these results should be worrisome to Facebook and marketers looking to reach this demographic. This change puts Twitter in strong competition for teen users relative to Facebook based on this data. It’s interesting to note that Tumblr which other research shows to have strong usage among this age segment barely registers with teens.

Examined on a scale from least important to most important, Facebook dominates but has steadily lost ground in the past year.  It’s useful to note that, where there was data from 2012 for a social media venue, its importance decreased. This is consistent with the Pew Internet Research chart shown above.

When it comes to shopping, 53% of females and 52% of males indicate social media has an influence of their purchase decision. 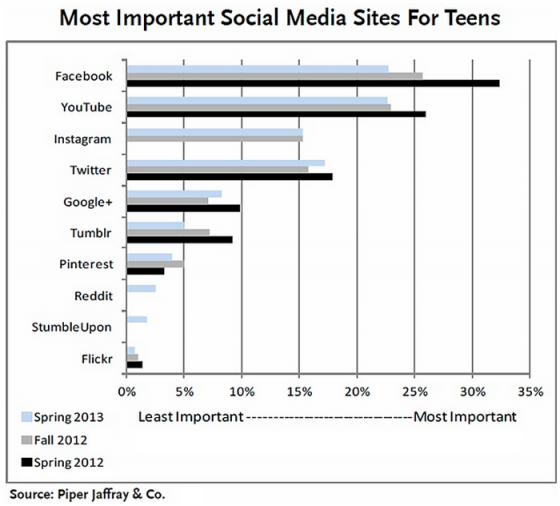 Actionable Marketing Tip: Create a marketing and social media persona for your target audience to ensure that your social media strategy is aligned with their activity and needs. Think beyond Facebook. When it comes to social media and content, test YouTube and Instagram.

3. Facebook participants take a vacation from the site, either temporary or permanently

Facebook usage among participants varies according to February 2013 research by Pew Internet. Deeper examination reveals that a fifth of Facebook participants have left the  social media venue and less than half of that amount are interested in joining it. This means that usage is decreasing. Additionally, about 60% of participants take a vacation from the site.

To add to this challenge, over a quarter of Facebook participants consider it less important and over a third have decreased their time on the site. 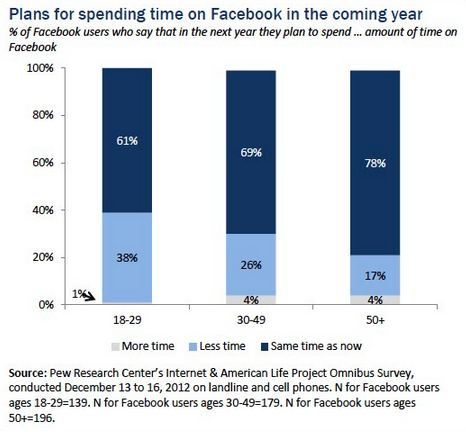 The average Facebook participant gets more out of their social media experience on the platform due to the presence of power users who account for as much as 20-30% of Facebook activity according to earlier Pew Internet Research from February 2012. Further, power users vary depending on the specific activity. Actionable Marketing Tip: Where possible focus your marketing efforts on power Facebook participants for that specific activity since this will maximize your reach.

As social media continues to evolve and new options compete for participants’ time, Facebook, as the dominant US social media platform, will continue to loose ground in terms of use. That said, it’s still the 800 pound gorilla of social media and every marketer needs to pay attention to it.

What has your experience with Facebook been as a participant as well as a marketer? Have you stopped using the social network?