Twitter: 12 Guidelines to Engage & Build Your Following If You Are Not Lady Gaga 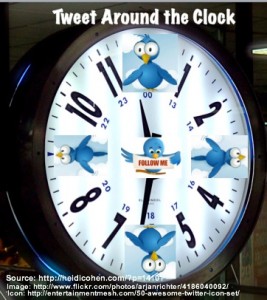 Unless you’re Lady Gaga, it’s difficult to amass lots of Twitter followers without actively engaging. To build a Twitter following and related reputation, you must provide  information on a regular basis that your target audience finds interesting and useful.

So how do you do this? Here are twelve tips to help you tweet around the clock.

Of course, this doesn’t mean that you have to actively tweet 24/7. Instead you need to find a format and process that works for you. As with other social media formats, you must be present and engage when your target audience is active on Twitter.

Twitter, like other social media venues, requires continual fresh content. The big difference is that it is restricted to bite-sized chunks of 140 characters or less. Like other social media, it needs to be fresh and engaging. To this end, your tweets must sound human and be spaced out over time.

What other suggestions for using Twitter all day long would you recommend?

Tip of my hat to Patrick who attended my #PRSAHR presentation and inspired this post with his question.

Here are some related articles you might find of interest.

3 Responses to Twitter: 12 Guidelines to Engage & Build Your Following If You Are Not Lady Gaga