Groupon’s Super Bowl ad broke the number one rule of social media: It’s NOT about you!  Groupon’s making light of the Chinese occupation of Tibet in their Super Bowl ad totally missed its mark.  It’s hard to believe that no one at Groupon, their advertising agency or other advisor didn’t have a sense of how bad this ad would play in the theater of public opinion, especially following on the heels of Kenneth Cole’s Egyptian gaff.

(But remember this hubristic startup also turned down an offer to be bought out by Google for $6 billion.) It underscores the need for companies to have vigilant 24/7 real-time PR / brand monitoring and crisis management in place.

While every Super Bowl advertiser hopes to leverage the platform to grow their brand and rate high in the post-game discussions. But Groupon’s number three spot on the Brand Bowl with 2,533 tweets wasn’t pretty when you consider the tome of the comments! Groupon’s ad generated the most significant negative brand sentiment (-4.3) of all the Super Bowl advertisers. 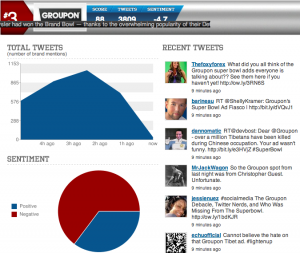 Immediately as the ad finished airing, offended viewers tweeted their extreme displeasure and also quickly connected Groupon with Kenneth Cole similar faux pas.  Kenneth Cole whose totally tasteless Cario tweet was again a hot talking point because of ad that had nothing to do with them.  Search Twitter and you’ll see hundreds  of tweets about a Kenneth Cole Groupon offer. Far from the social media engagement, Groupon’s marketers hoped for.

For an online firm that’s well ingrained into the social media ecosphere, it’s surprising that Groupon was so clueless about their messaging.. Even more surprising was their lack of response on the social platforms that helped to build their base. It was as if they got a taste of how their merchants felt when their Groupon deals backfired causing financial challenges. As for Kenneth Cole, everyone in their PR department must have been glued to the game since, despite a mass revival of their social media problem, they didn’t make a peep.

Stay tuned to see how Groupon steers its way through the post-game discussions. One thing that’s for certain, even with more effective crisis management, the Tibetian Super Bowl ad will not be soon forgotten. But it seems unlikely to reverse Groupon’s decline in market share relative to Living Social.

What did you think of Groupon’s Super Bowl ad? What would you do if you were a Groupon marketer and why?

Here are related stories about Groupon: