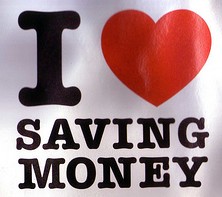 Everyone loves a deal, regardless of how much money they have, and consumers use the Internet and smartphones to find the best price, online or offline. Additionally, shoppers use a variety of coupon sites, like RetailMeNot, the online version of pennysavers, which run as affiliate programs, and attract deal seeking customers. As a result, purchasers have close to perfect market knowledge before they buy. Enter a variety of new options, group coupons that offer deals requiring a minimum number of customers to commit to the offer to activate the deal. The question for marketers and merchants is: do these deal make sense for your business? 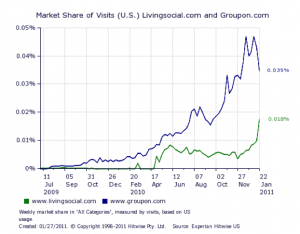 Chicago-based Groupon is the leader in this category with an audience that skews middle class according to Experian Hitwise. Compete reports that Groupon has grown from 2 million visitors in December, 2009, to 15.6million in December, 2010. Groupon gained visibility with its Gap offer of $50 worth of merchandise for $25 in the midst of the August back-to-school season, selling 440,000 units for $11 million in revenue. Groupon turned down Google’s $6 billion buy out offer.

By contrast, Living Social, with an audience of early adopters was bought by Amazon for $175 million. Based on Experian Hitwise’s analysis, Living Social, which had one tenth of Groupon’s traffic, has been closing the gap with Groupon. Recently, Living Social ran a $20 Amazon coupon that cost $10, selling 1,378,938 vouchers worth $13 million in revenue. In part, this is attributable to LivingSocial’s amazing Amazon deal and a concurrent falloff in Groupon’s traffic. An analysis of the offers would determine whether there are other factors contributing to Groupon’s decline.

Where are the national offers?

What these sales, Gap and Amazon, have in common is that both were for major national retailers, not small, local firms. Further, these offers generated lots  of media attention, creating extra traffic. But scratch below the surface and they appear to be the only big sales these firms had.

One challenge is the fact that, since there’s no cost, consumers can and do register for multiple emailings. They chose what looks good to them. Therefore, it’s incumbent upon the retailer and the dealmakers to make their offers as enticing as possible, leading to very deep discounts.

Add to these issues the fact that consumers cherry pick special services for one time use. Based on my friends’ experiences, they use them to treat themselves to services that they might not do at full price, often a girls’ day out. Not the type of traffic you can build a business on!

But by far the major impediment is that research showed that Groupon was unprofitable for one third of the merchants surveyed and that over 40% of them wouldn’t run a repeat offer. For a small and medium size businesses those odds can be daunting.

Another issue is that there’s a low to no barrier to entry for new players.  Anyone with significant customer reach and database can compete in this market. Among the potential entrants are Facebook, Google which is rumored to be testing the market, location based services like Foursquare and Gowalla which can leverage their mobile reach, Yelp which has relationships with local business and old fashioned local newspapers and related media that already have local business relationships in place. 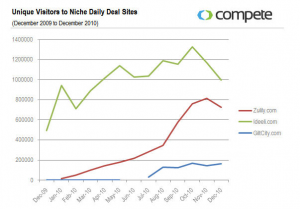 If this market wasn’t crowded enough with potential entrants, there are niche players such as Ideali and others. As Compete points out, these firms could imitate Woot.com, the fun daily deal site, also owned by Amazon, that’s expanded their offering into new niches as a model.

While sales numbers like the ones that the Amazon deal rang up for Living Social look appealing, it’s critical to run the numbers on a variation of potential response rates to determine if a deal like this is worth your investment. Never underestimate the ability of a parent company like Amazon to be able to benefit from the additional sales information and data integration across businesses.

As 2011 progresses, we’ll see how businesses continue to compete and evolve in this coupon space. One thing’s for certain: there will be more and fiercer competition. Further to entice small business owners in, it’ll be necessary to ensure that they can do better than break even because if they don’t succeed the model won’t work.

What do you think? Would you do a Groupon or similar deal for your business? Why or why not?

Related columns that you may find of interest:

11 Responses to Do Groupon Deals Make Sense for Merchants?