The Future of Social Media

What Social Media’s Evolution Means For You 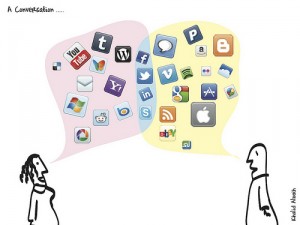 While many of us active on social media networks today would like to think it’s a recent phenomenon, the reality is that social media’s been around in various forms since the beginning of the Internet (and before.) Options such as blogs, bulletin boards, reviews and chat rooms are all more than five years old as were Facebook’s predecessors SixDegrees.com, Friendster and MySpace.

Given this evolution, where is social media going and what does it mean for you?

To predict the future, it’s useful to examine the recent past. Here are social media’s three key developments in the last five years.

How have these social media developments changed the world around us?

During the last five years, social media has had a profound impact on how we engage.

The major challenge for social media networks will be their ability to adapt and remain relevant over time. In part this will not just be about Facebook, Twitter and whatever other platforms gain traction. It’s a matter of how the paradigm will change. Similarly, what does search-focused Google do to remain relevant in a social media centric Internet?

What are the implications of these social media developments for businesses?

Social media will cause businesses to evolve in order to survive. Here are three salient ways in which they’ll change.

While social media has already caused changes in how we engage individually, socially and politically, it will continue to alter how we communicate.

What do you think of these social media predictions for the future? What do you see happening differently?

NOTE: This post was inspired by a research study I participated in earlier this week.

8 Responses to The Future of Social Media