Are You Ready For Facebook’s Downfall? 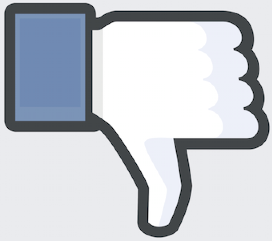 This is no glib Chicken Little forecast. Rather it’s real research conducted by real rocket scientists, John Cannarella and Joshua A. Spechler, from Princeton’s Department of Mechanical and Aerospace Engineering in their article, “Epidemiological modeling of online social network dynamics”.

Cannarella and Spechler used epidemiological models to explain social media user behavior where adoption was analogous to infection and abandonment was analogous to recovery. Using MySpace search query data the researchers created an initial model and then applied it to Facebook query data. 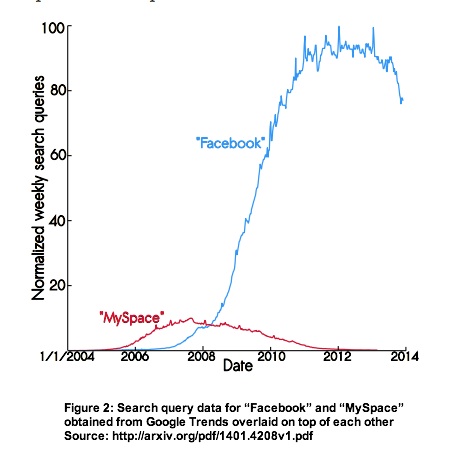 Their model suggests Facebook has already reached the peak of its popularity. They conclude that Facebook has entered a decline phase, as shown by a downward trend in search frequency since 2012. Extrapolating the best ﬁt model into the future, they predict Facebook activity will rapidly decline over the next few years. 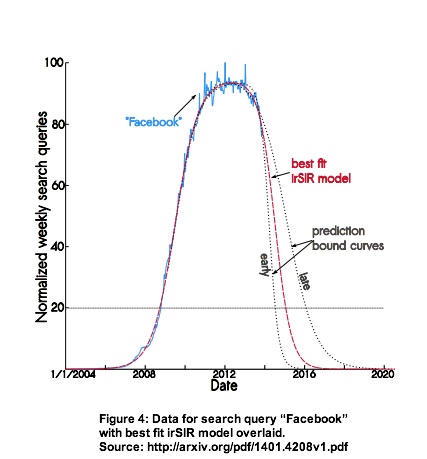 While you may not be ready to accept that users join and leave Facebook the same way they catch and recover from the flu, here are 4 other indicators that support Cannarella and Spechler’s Facebook forecast. (Editor’s note: We considered 2013 the year Facebook reached its pinnacle.)

Facebook’s downfall and your marketing

Here are 3 actionable marketing tips to help you prepare for Facebook’s diminish strength as a media platform for building your brand and delivering leads.

While this data needs further verification, there’s other supporting research that shows Facebook usage is declining, especially among teens. As a marketer, take heed and start to establish your presence on other platforms.

P.S. Please note while this research has yet to be peer reviewed; it’s received thousands of social media shares and hundreds of comments on different media sites.

Subscribe to receive the full text of each new actionable marketing post delivered free, five days a week to your inbox. Signup for the weekly Actionable Marketing Newsletter and get a roundup of of the week’s posts, plus extra content you won’t find on the website, plus a free e-book: What Every Blogger Needs to Know – 101 Actionable Blog Tips