What The First Facebook Usage Decline Really Means For Your Marketing

Posted on February 27, 2018 by Heidi Cohen in Social Media | Comments Off on What The First Facebook Usage Decline Really Means For Your Marketing 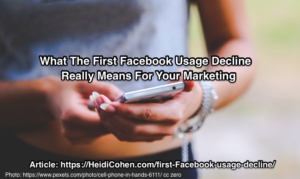 Worried about the first Facebook usage decline as reported by Edison Research?

Of course you are—as a marketer, you pay attention to major Facebook shifts including Facebook’s organic reach decline and the impact of Mark Zuckerberg’s announcements earlier this year.

Facebook is one of the top global marketing-media-technology companies known as FAANG (Facebook, Amazon, Apple, NetFlix and Google.) Beyond their massive market share and business clout, their offerings are so much a part of our lives that we can’t imagine being without them.

As a result, these 5 companies often signal trends and shifts in the macro-environment. This includes how we gather information, think and relate to other people. In turn, this shapes our media consumption and buying behavior.

In the context of other media and trust shifts Edison Research’s Facebook findings require marketers to reassess their 2018 plans and beyond. This includes content marketing, social media and thought leadership strategies.

To help you, this article will examine why Facebook usage declined and what other important trends are changing the media landscape. Further, it’ll explain the implications for your marketing and show you how to adapt to grow your business.

In contrast to consistent growth over the past 10 years, the percentage of US users aged 12+ currently reporting that they “ever use” Facebook fell 5 percentage points to 62% based on Edison Research and Triton Digital’s tracking. 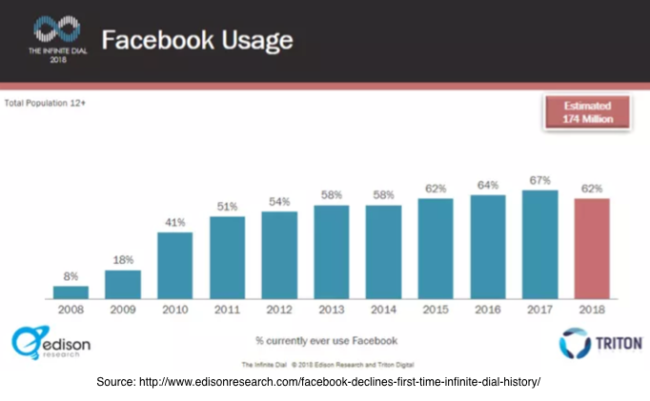 Further this usage decline is specific to Facebook; other social media platforms show robust growth. Instagram,  owned by Facebook, is expected to grow 13.1% in 2018 to 104.7 million users.

The decline of Facebook’s young age segments was predictable. The network initially grew as a teen communication channel away from adults’ prying eyes.

In 2018, Facebook will lose 2 million users aged 24 and younger according to eMarketer. Specifically, US Facebook user decreases by age group as follows:

In 2018 Facebook US user numbers will edge up less than 1% from 2017 to 169.5 million. Due the size of Facebook’s user base this is still a large increase in user numbers.

Beyond Facebook-specific dynamics 2017 was a period of disruption and change resulting in increased skepticism. (As a point of reference, here’s how customers viewed trust and related brand factors in 2012. It outlines key brand elements you must consider to build trust with your audience.)

While empowering people to take action, social media has also tarnished our trust in government, business and media. In the process our ability to discern the truth has blurred. 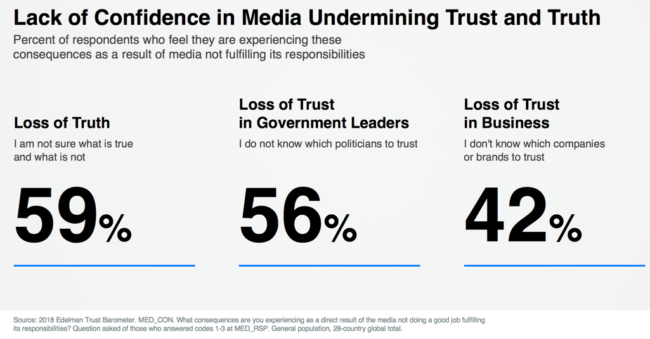 The ability of non-Americans to use Facebook to place ads and share stories in the 2016 US election was part of the Congressional hearings. This makes the public feel that Facebook can’t safeguard their privacy and personal information.

As a result, trust in media entities’ ability to source real news has eroded according to Edelman’s 2018 Trust Barometer.

Further, high profile digital media entities like BuzzFeed have experienced flat or declining traffic. As a result, Mashable sold itself to Ziff Davis and Vox shed 5% of its staff (Fast Company).

The lackluster performance of these once digital darlings signals that marketers must change how they distribute content and advertise on media. 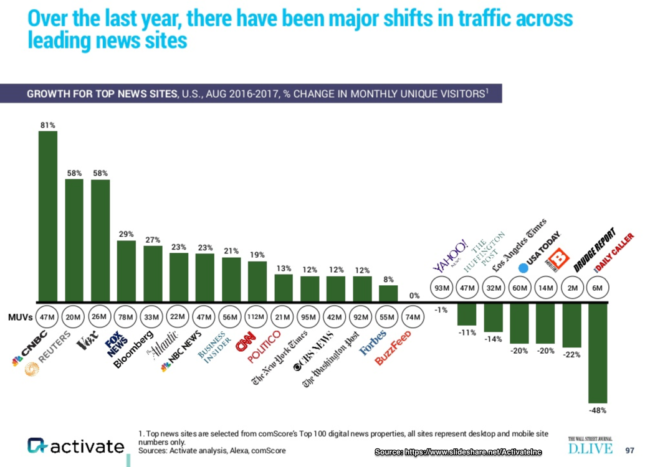 For the first time in 18 years, Edelman’s 2018 Trust Barometer revealed a 6 percentage point decline in trust in “people-like-me” to 54%! This should force you to reassess your 2018 plans.By contrast, here’s what trust looked like in 2017.

“People-I-Know” trust is at the heart of Facebook and other social media platforms. Their attraction for marketers is fading. 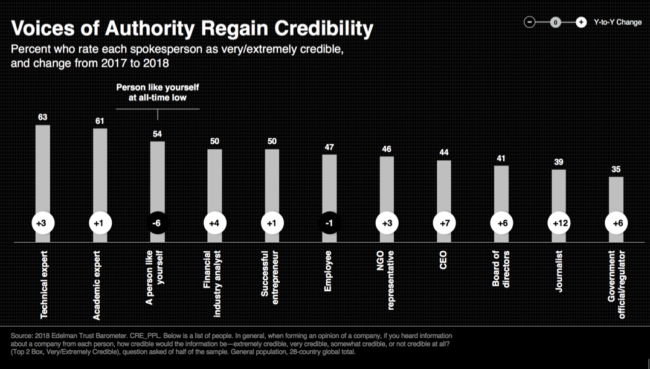 Further consumers consider your brand, content marketing and influencers to be media. This is based on answers to the question: “What did you assume was meant by the phrase “media in general”?”

Consumers consider your brand, content marketing and influencers to be forms of media @Edelman #trust #marketingClick To Tweet 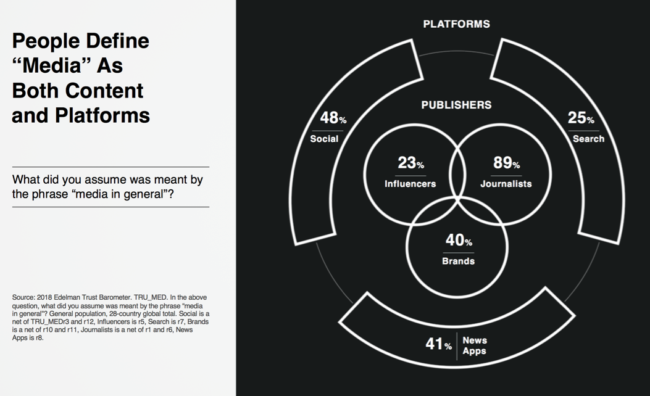 After the Parkland High School shooting, this trend has extended to students who are mobilizing the #NeverAgain movement against gun ownership.

There’s increased awareness of the very real problems and addiction to smartphones and social media entities.

FAANG is a stock market abbreviation for the top tech companies. They include Facebook, Apple, Amazon, NetFlix and Google.

Activate illustrated the FAANG firms in terms of their voice-activated assistants. (Note: Activate used Microsoft instead of Netflix.) 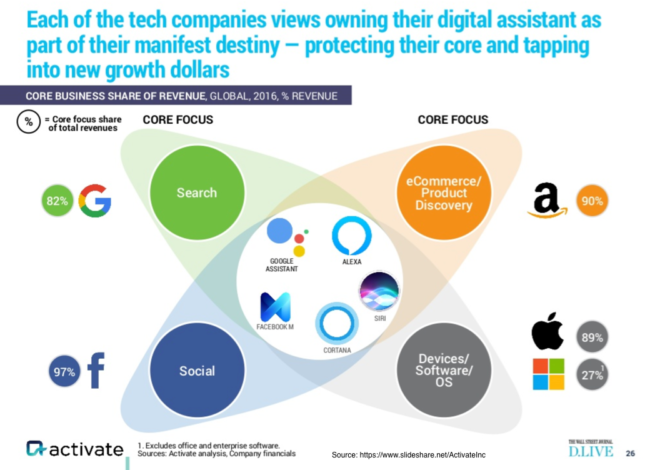 Facebook falls short of its FAANG peers in 4 key ways:

Use the news of this first Facebook usage decline as a wakeup call to reassess your marketing plans.

You can no longer leave your social media, content marketing, search or influencer marketing on autopilot. As you assess your marketing determine what to test.

Fill your marketing plan’s holes where Facebook lacks opportunities such as search.
Start with the metrics information you have to determine which strategies and approaches still yield a positive return and what needs to be modified.

Where possible get additional tracking from your finance and/or analytics department to supplement your marketing data.

Going forward, determine how to build tracking and metrics into your marketing including Facebook before you start your program.

Even better: figure out how to use this opportunity to deepen your audience and customer relationships by being transparent.

Take a deep breath because you can handle these Facebook and media changes.