Posted on February 8, 2013 by Heidi Cohen in Social Media | Comments Off on 9 Facebook Research Charts for Your 2013 Marketing Plan 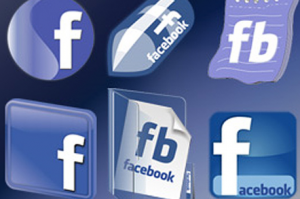 Facebook remains social media’s global 800 pound gorilla. Post-IPO, Facebook is challenged to find new growth and monetization opportunities and Facebook Mobile looks to be where they are finding traction.

Here are four different perspectives on Facebook’s growth during the second half of 2012 and what it means for Facebook and marketers for 2013 shown through nine different research charts.

Facebook remains the global giant in terms of most active users according to the Global Web Index. Its reach exceeds the combination of Google+ and YouTube the next two global sites, both of which are owned by Google. Interestingly, a number of Chinese social media sites follow these in terms of size.

Further, the research revealed that Facebook has over 50% of the global active participants. 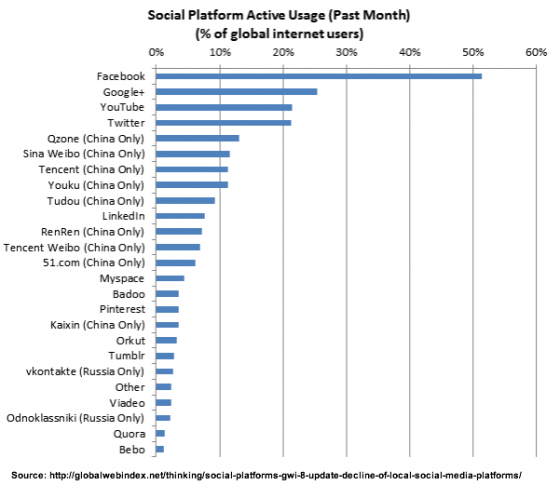 Yet it’s important to note that Facebook’s growth, while close to 30%, was second to that of Twitter but ahead of Google+. This means that Facebook’s rate of growth is slowing. Given the size of the social media entity, this isn’t a surprise since there are very few new segments of users or countries where it doesn’t already have a presence. 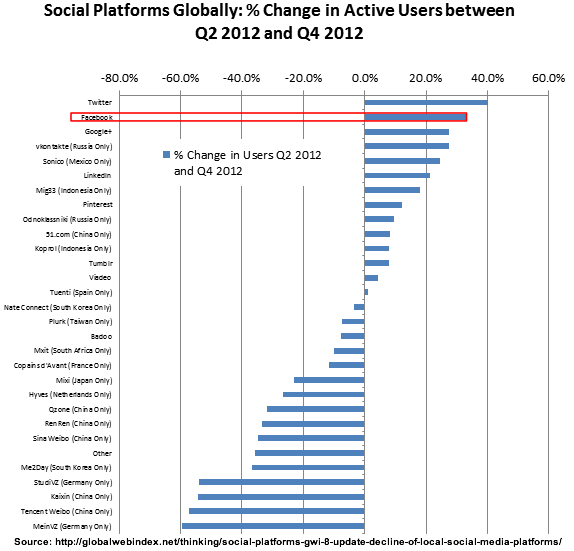 Here’s how the increase in Facebook users breaks out by country according to GlobalWebIndex. Growth in the US, where Facebook originated, was in the middle of the pack. Here’s how to use Facebook for marketing purposes. 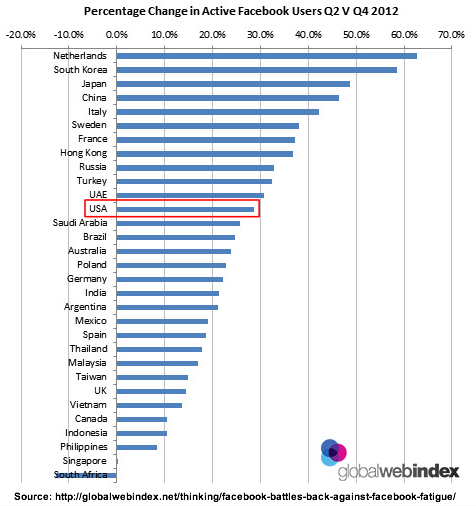 Actionable Marketing Insight: Facebook continues to be the 800 pound gorilla of social media for the near future. Going forward, its growth rate will be slower and at the expense of other social media entities. Meanwhile due to their size and smaller global footprint, other sites like Twitter and Google+ will continue to have higher growth rates.

As reported by Facebook, mobile users grew significantly in the last quarter of 2012 and account for almost a quarter of its advertising revenue, based on the social media site’s financial reporting. While Facebook passed 1 billion monthly active users, mobile users reached a tipping point in 4Q2012. Mobile is the heart of Facebook growth  experiencing over 50% growth year-over-year. (NOTE: This is consistent with overall social media trends.)

Actionable Marketing Insight: Mobile is where the Facebook action is. Specifically, Facebook mobile DAUs exceeded web DAUs for the first time in 4Q2012. From a usage and marketing perspective, this will translate to more content snacking between other activities and/or sharing special moments with short comments and/or photos

Are we tired of Facebook? According to research by Pew Internet, Facebook is battling usage challenges. While over two thirds of Facebook participants plan to continue using the site at the same level, over a quarter plan to decrease usage.

It’s 18 to 29 year olds who are most likely to decrease their time spent on Facebook. While about seven out of ten of the early adopter age range plan to continue their usage at the same level. 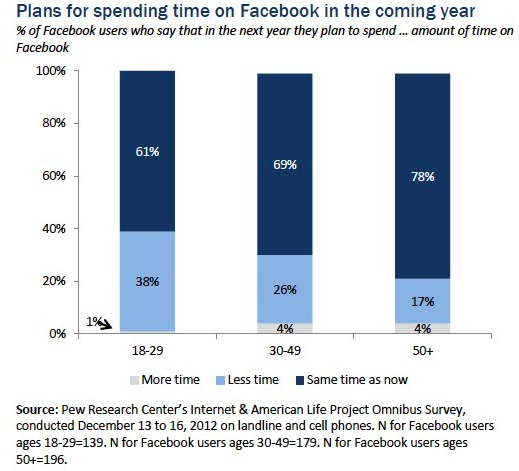 Actionable Marketing Insight: Participants, especially those out of school have more important activities competing for their time and attention. This makes sense as teens and twenty-somethings take on more responsibility, they’ve got less leisure time.

Being a current Facebook user isn’t predictive of future activity on the social media site, at least among US users, since 81% have taken a break, either temporary or permanent, from the site according to Pew Internet.

Time was the biggest reason for taking a break from Facebook. Specifically, it took too much time, was a waste of time, or was spending too much time on the site. 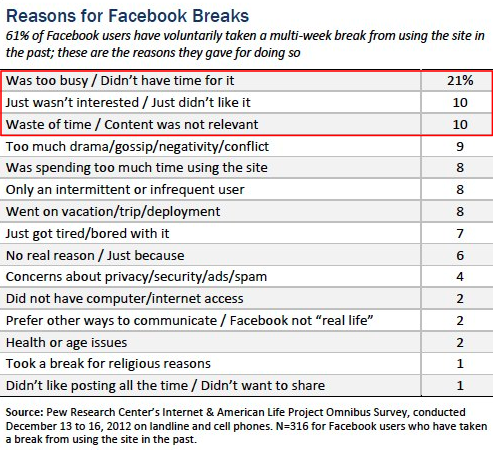 Actionable Marketing Insight: Underlying these answers is a serious challenge for Facebook. An appreciable share of participants feel that it’s not worth the amount of time they spend on the site.

For Facebook, the exponential growth of mobile usage is well timed.  (Here’s more detailed research on mobile, both smartphone and tablet.) Aided by Apple’s move away from Google Maps, Facebook’s mobile app took off in the second half of 2012 according to comScore Mobile Metrix. 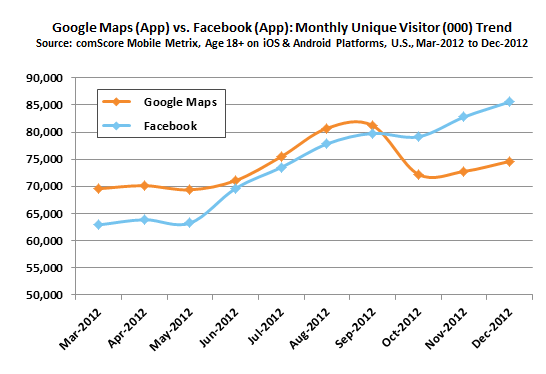 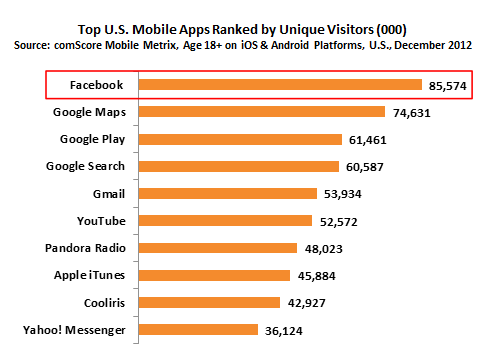 Further, it’s useful to look at time spent on mobile apps where Facebook apps accounts for roughly one out of four minutes and Google apps in total account for one out of ten minutes. The lion’s share of time is a mix of other apps in aggregate. 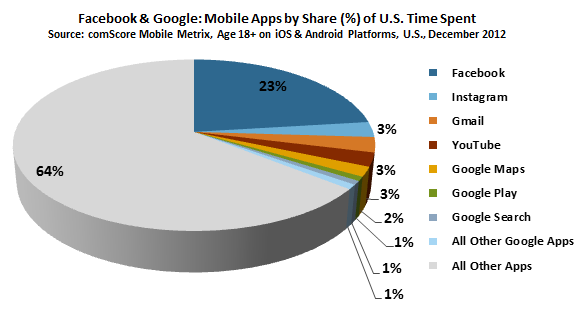 Actionable Marketing Insight: Short term Facebook has an advantage on mobile. Given the fact that the next five apps belong to Google, this doesn’t necessarily translate into a permanent advantage for Facebook. Further, Google has the Android mobile operating system allowing them to ship smartphones and tablets with its apps preinstalled, giving them a strong competitive lever.

Please join me at: