Posted on February 3, 2012 by Heidi Cohen in Social Media | 4 Comments

No matter how you look at it, Facebook is the Internet’s  900 pound gorilla.

While on an individual level, many of us don’t count the minutes we spend on Facebook.

They’re interspersed with other online or mobile activities, collectively across the global Facebook ecosystem they add up.

So it’s no surprise Facebook could be worth between $75 and $100 billion based on the numbers released in their IPO filing.

A deeper look into Facebook’s data and financials reveals insights into their future prospects of interest to users, marketers and investors.

Facebook participants create a mind boggling 2.7 billion likes and comments and upload 250 million photos per day. That’s a lot of content and communications! (Here’s an interesting look at why we friend.)

425 million monthly active users connect to Facebook via a mobile app or via mobile-optimized versions of its website. Facebook currently doesn’t monetize these impressions since these mobile options have no advertising. Greg Sterling of Search Engine Land roughly estimated Facebook’s mobile advertising to be worth about $2.5 billion.

From a global perspective, Facebook continues to grow and overtake local social networks. Based on Facebook’s 2011 track record in the Netherlands, Vietnam and Brazil, it’s poised to take the lead over local social networks in Japan, South Korea, Russia and Poland according to comScore. 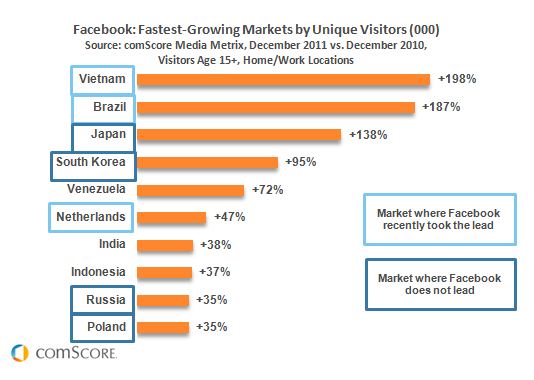 Each visit lasts about 20 minutes according to Hitwise.

Facebook skews slightly more female (57%) versus male (43%). This makes sense given that most of the content exchanged tends to align with more female interests.

Contrary to what many believe, Facebook’s users by are relatively evenly aligned with the U.S. online population. This reveals the relative maturity of Facebook’s penetration. 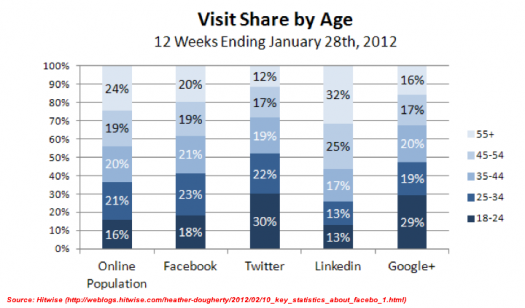 The high (96%) percentage of returning visitors versus the percentage of new (4%) visitors shows  Facebook user loyalty. It’s also a sign of Facebook’s maturity as a social media network. 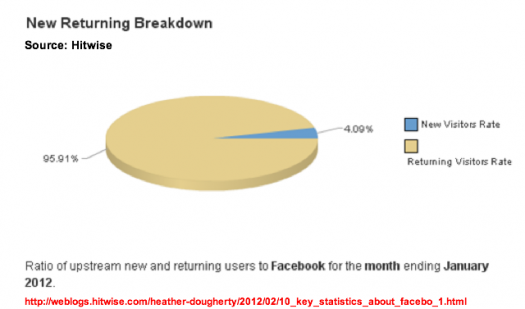 Facebook is the most searched term in the U.S. Facebook-related searches account for 1 out of every 7 searches in the U.S. based on Experian Hitwise data.

What marketers need to know about the Facebook IPO

From a branding perspective, about 1% of fans of the biggest brands on Facebook actually engage with them, according to an Ehrenberg-Bass Institute study reported in AdAge.Facebook fans tended to skew towards higher buyers.

Currently, Facebook is a lot like using mass media to get broad reach but actual engagement takes longer.  As a marketer,  understand what your audience wants from you on social media platforms. (Here’s what a Facebook like is worth from a marketing perspective.)

The answer is: it depends.

Since U.S. advertisers accounted for over half of the advertising revenues, Facebook has the ability to more fully monetize its non-U.S. users (although they’re probably not as valuable as US-based users).

Given Facebook’s mammoth database of information, it could deliver enhanced advertising opportunities and/or sell the information in a way that removes specific personal details.

Show me the money!

85% of Facebook’s revenues came from advertising and 12% came from Zynga, a gaming company best known for its games Farmville and Mafia Wars.

Before you count future sales, note that Facebook’s filing states their current agreement with Zynga ends in 2015, a mere 3 years away.

Business Insider’s Henry Blodget is concerned with Facebook’s valuation since its quarter over quarter revenue growth is decreasing. Further, Facebook’s revenue growth relative to other tech firms like Google is lower. 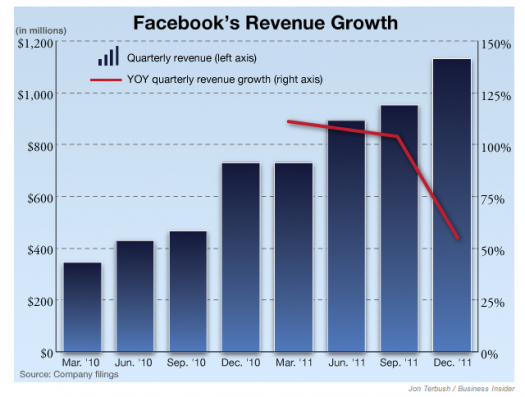 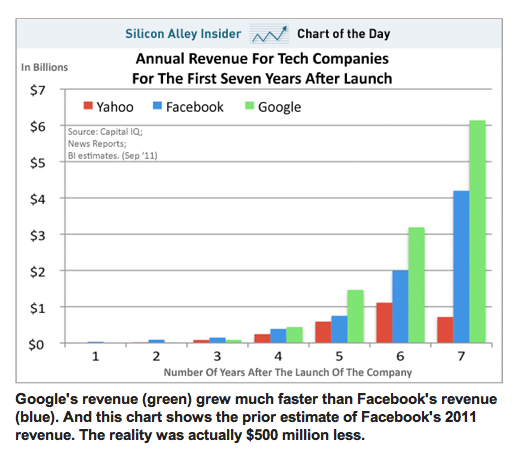 As marketers you need to be where your prospects and customers are, this means Facebook.

What’s your perspective on Facebook’s IPO and why do you feel the way you do?

4 Responses to Facebook IPO: What Its Numbers Mean [Data]