Evolving Content Consumption Patterns: What You Need To Know [Research] 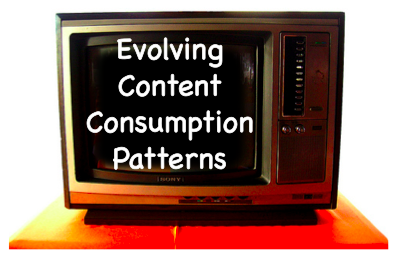 We live in a multi-screen world, a fact highlighted at this week’s CES. We have screens designed for use everywhere from public transportation to the bathroom. These screens provide new ways for us to consume content all day long. Now one device can do everything multiple devices did.

The use of multiple screens and different devices has changed our content consumption habits. There are four main ways we consume content: focused use, dual input, info snacking and time shifted. This enables us to consume more information in less time.

On average, Americans spend roughly six day a month watching traditional television compared with slightly less than half a day on time shifted television according to Nielsen. While these figures are based on a 24-hour day, they don’t take into account the fact that most viewers who time shift shows skip ads making their viewing more compact. 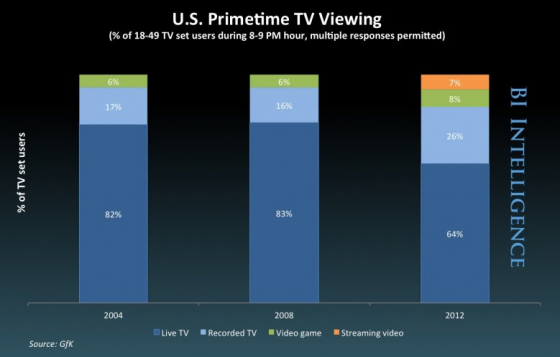 289 million people in the US have at least one television in their homes according to Nielsen. What’s interesting is that two-thirds of households have three or more television sets.

For over 90% of owners, the television is no longer a free-standing device only used to view television shows. (BTW- This data doesn’t capture is the number of people who use their televisions as a larger display for their computer to view videos and other content.) 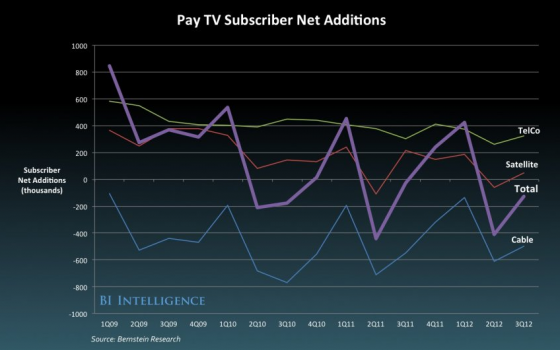 Video starts to matter (Television, movies and other content)

162 million Americans watch online video, averaging 5.9 hours per person in a month. Men spend more time watching video online. Interestingly video viewers use both the Internet (or PC) in similar amounts to mobile phones, specifically, an average of 5 hours and 51 minutes on the Internet and 5 hours and 22 minutes on a mobile phone.

Research compiled by both Business Insider and Nielsen show an increase in over-the-top video. Closer examination shows that it’s not just movies, it’s also television shows. Other firms to watch include Amazon and Apple. 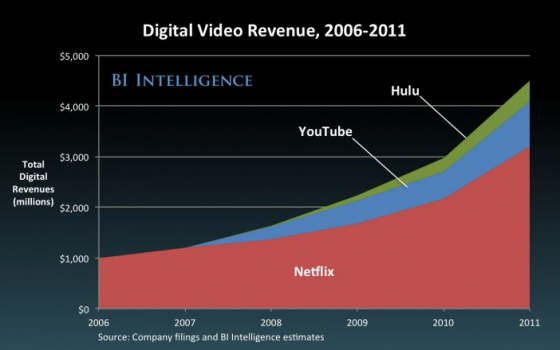 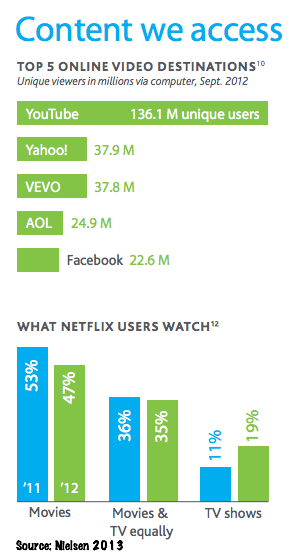 On average, Americans spend twenty-eight and a half hours a month on the Internet according to Nielsen. Given how much time people spend on the Internet as part of their work and the increase in tele-communting and people working from home, this seems low.

Social media is where we spend our time 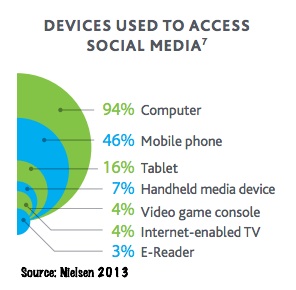 Based on this research, here are five content trends that are important for marketers to incorporate into their 2013 plans.

As devices and related content consumption habits evolve, marketers must adapt their activities to provide the information consumers seek and to place their advertising where it reaches its intended target audience.

What do you see as the implications of the changing devices and our consumption habits?

Want to find out more about content marketing? Please join me, I’m speaking at:

Here are some related articles you may find of use:

One Response to 5 Content Trends Every Marketer Needs In 2013