Posted on September 29, 2010 by Heidi Cohen in Communication | 6 Comments 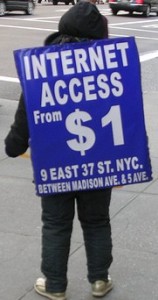 During this Advertising Week New York, a couple of the more talk-worthy promotions were technology-enabled sandwich board advertisements. The old-fashioned advertising clad sandwich board brings to mind a man standing on a street corner near a merchant’s establishment handing out flyers. Without any modern technology, you pay attention to them because they cross your line of sight and hand you a flyer.

At the IAB’s MIXX event, several men clad in black (which doesn’t distinguish them in New York City) wore flat panel advertising screens powered by an equally big battery worn on their back. In addition, each advertising adorned man was equipped with a digital device to collect information. Sponsored by Bloomberg, these walking engagement vehicles offered the chance for a $500 shopping spree in return for three bits of information.

Outside the Future of Media at the Times Center, there were about five people riding Segways that appeared to be chariot like advertisements for National Mobile Billboards. This team gave away ping-pong balls with eyes on them and related collateral.

Clearly, the goal of these new advertising vehicles is to attract new audiences with a more personable form of traditional interruption advertising. The results should show that this advertising format will work because it’s need and attention getting. While they got my attention the challenge will be whether these efforts will have the same break through ability once the novelty wears off. My guess is that they won’t.