Why You Need Earned Media In Your Marketing And PR Mix 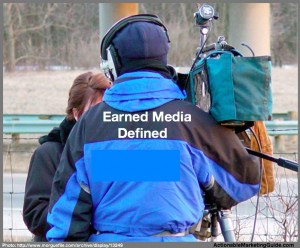 Earned media is the new PR. It’s not only just an organic by-product of your social media or content marketing strategy.

Earned media isn’t a media entity in terms of being a set collective communication outlets or tools used to store and deliver information or data. Nor does earned media meet the 15 characteristics of a media entity.

Instead of screaming ME, ME, ME, earned media gets someone else to mention you or your business on one or more media platforms. As a result, you gain greater recognition since you’re exposed to other people’s audiences.

Many marketers, PR executives and business leaders mistakenly think earned media is “free” visibility and promotion. They believe this because they don’t directly pay to create the content or support it with advertising. Earned media costs are indirect, but they are real.

For marketing and PR purposes, earned media is defined by the following 7 key attributes. 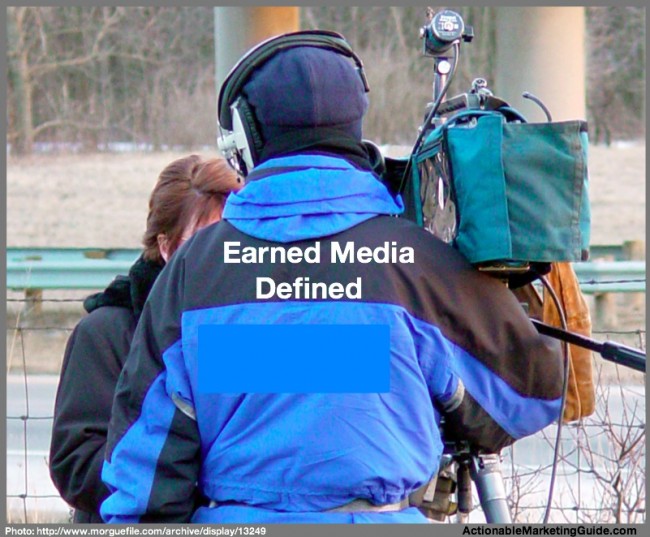 Earned media works in coordination with the rest of your organization to ensure that you’re on track to succeed. The goals for earned media include:

For earned media to be effective, you or your PR firm must develop connections with content creators (often journalists), influencers, customers and social media followers.

With increased use of social media, you no longer need to have a direct relationship with journalists or influencers, your customers and social media followers may share or comment on your content and broaden your reach, especially since the average social media participant has 150 connections, the Dunbar number.

To develop third party associations, sign up for HARO. It’s a great way to connect with people writing content that need a specific expertise. (BTW–Did I mention that it was free!)

3. Requires other people to mention you or your business

Earned media’s power comes from other people talking and sharing information about you and your company. Based on Edelman’s Trust Barometer, this implicit endorsement gives the mention more credibility than if you published it yourself or paid to advertise your message. (Here’s a full analysis of 3 key customer trust factors.)

The top of the customer trust list are family and friends, an academic expert, companies I use and a journalist. 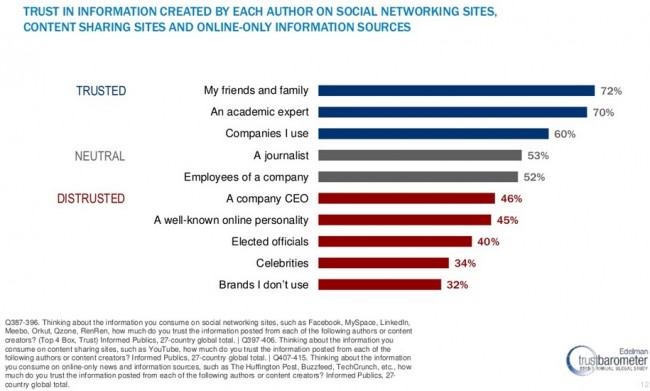 4. Extends the 4 key types of media

Here are examples of earned media on each of the 4 key types of media:

By encouraging other people to mention you and your firm on their media entities, you’re able to tap into the power of other people’s audiences. You can do this;

At a minimum, earned media requires human resources. Smaller businesses and solopreneurs often substitute their time and efforts for financial resources to create content, compensate PR and advertising agencies, and pay for supporting advertising and distribution.

Don’t assume that encouraging people to mention you or your firm is sufficient to maximize your reach. Increase your earned media results by sharing content that mentions you or your firm across your owned and social media platforms.

Earned media is the outcome of planned and executed marketing and PR strategies. Earned media contributes to achieving your business’s key goals. Among the earned media metrics are: 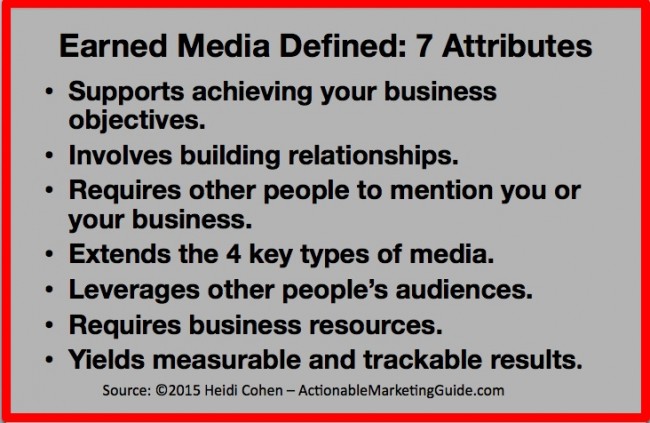 BTW, here’s how 38 marketing experts expressed their earned media definition.
While earned media isn’t a media entity in the traditional sense, it should be an integral element of your marketing and PR plans to maximize the results. It leverages the power of other people’s endorsements.

How would you define earned media and how have you used it in your marketing and PR?

P.S. This article is dedicated to one of my favorite PR professionals, Gini Dietrich.