Are you distributing your social media budget effectively between Facebook and Pinterest? Before you answer, you must know what your business goals are, where your target audience is, and how effective each site is for attracting your specific market to achieve your objectives.

To put these two social media sites in perspective here are some facts.

While Pinterest is a visual scrapbook, Facebook is the world’s top photo gallery. But marketers beware – photographs don’t necessarily translate into content marketing. Facebook images are just as likely to be someone’s newborn infant or grandmother’s 80th birthday snaps as they are product. 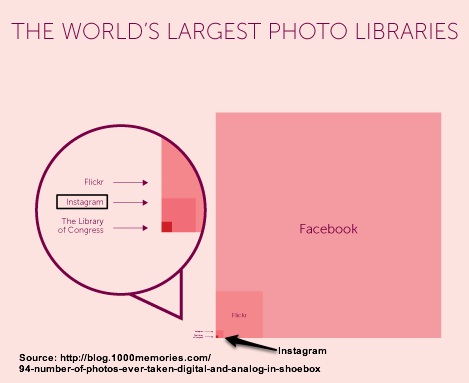 Further research by Dan Zarrella found that the use of photographs on Facebook yielded more likes, comments and shares than other content formats. [Here’s more analysis of Dan Zarrella’s Facebook research.] 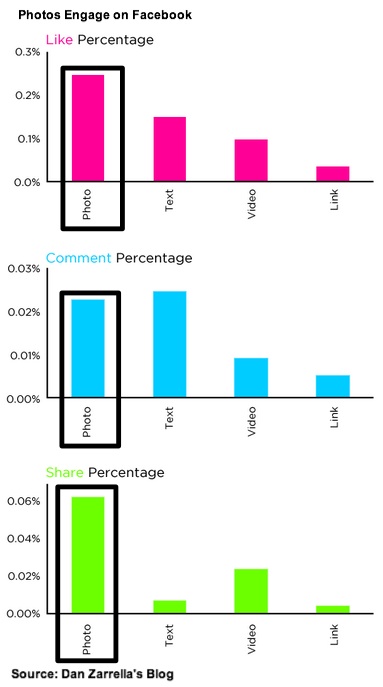 According to recent research by Lab 42, 87% of respondents “Like” a brand on Facebook. Before you take this finding to the bank, of those who “Like” a brand, 77% did so to save money and 42% had no intention of buying from the marketer. Therefore on Facebook, for a third of participants it’s about the savings. Additionally “Likes” have a real cost beyond the Facebook marketing execution and engagement, namely the reduced price and free give-aways.

Further, Lab 42 found that 50% of respondents thought that the brand’s Facebook page was more useful than its website. At a minimum, this should signal that you need to examine the effectiveness of your website before expanding your brand’s social media presence.

By contrast, Pinterest is similar to the social media virtual mall where participants go to get inspired to shop. Across a variety of attributes, respondents found Pinterest entertaining and inspirational for finding product to purchase. Participants preferred Pinterest over Facebook for these shopping related activities. Further 43% of Pinterest users agreed that they used the social media site to associate with brands with which they identify, about twice the rate who have the same feelings about Facebook (or 24%) according to the Bizrate findings. 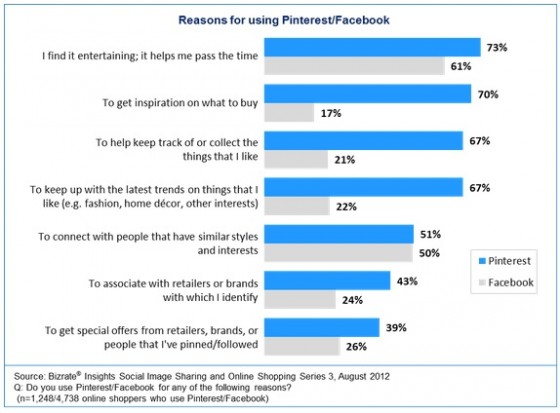 Earlier Bizrate research found that roughly a third of Pinterest participants purchase and slightly more than a third get inspired to buy product later. Marketers pay heed –Pinterest users get inspired to buy now and in the future. Even more important, one out of four bought product by clicking through the Pinterest image. (Of course, it helps to use a social media call-to-action.) 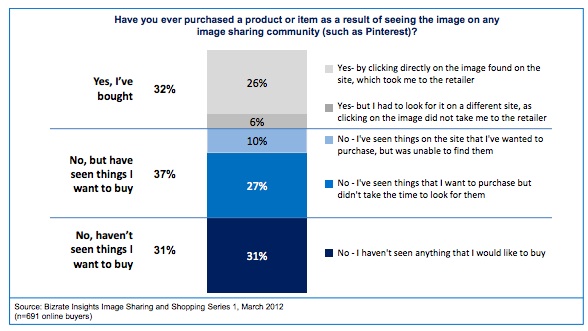 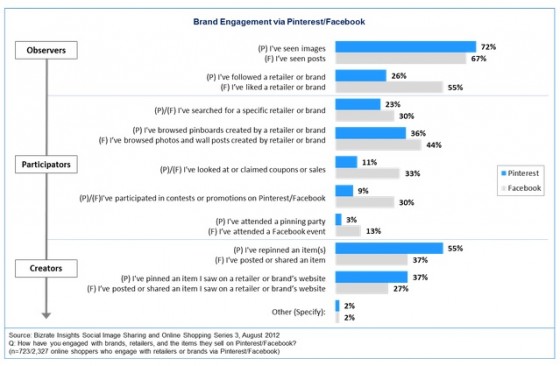 Here’s what this research means for marketers:

For marketers, the choice isn’t Pinterest or Facebook because the reality is that you need a cross-platform approach to social media. You must weigh the tradeoff between driving more cost-efficient sales directly in smaller numbers from Pinterest versus expanding your reach with Facebook to acquire prospects that tend to be price-oriented and may require additional marketing to convert. Unless you’re a small marketer with very limited resources, you’ll need a mix of these two social media options.

What has your experience been using Pinterest and Facebook to drive sales? Which was more effective for you?