Posted on February 3, 2014 by Heidi Cohen in Branding, Content Marketing | Comments Off on With Great Content Come Great Brands 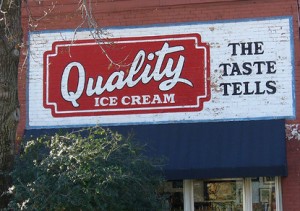 So where are you going wrong? [Hint: Do you lack content quality?]

Thirty years ago, Apple’s 1984 Super Bowl ad not only broke the rules, but also provided a lesson for quality content that builds great brands.

Using the tagline “Why 1984 Won’t Be Like ‘1984’” Apple’s ad borrowed George Orwell’s storyline. At that time, Apple’s Macintosh was pitted against the IBM PC. In the ad, IBM becomes Big Brother.

Setting the standard for great content, the 1984 ad neither promoted nor pushed the Macintosh. In fact, the product’s only appearance was the line drawing on the runner’s t-shirt and it’s voiceover tagline at the end. This was sufficient.

The runner’s message was larger than the Macintosh. It positioned Apple as the spunky upstart challenging the dull establishment.

Television ads worked (and still do) on repeated viewings. Yet, Apple only aired this ad once for an audience to view. At a time, the only platform to see a video ad was television. This created scarcity and talkability, which news shows were happy to provide!

Here are the key attributes of Apple’s content lesson regardless of the size of your marketing budget.

1. Position your brand, not just your product.

You need a hook your audience knows, particularly with a new offering. Apple positioned itself as the little guy against IBM, Big Blue. Critical point: It wasn’t subtle; every viewer got it. This isn’t new. Read Trout and Ries’s Positioning: The Battle For Your Mind.

Apple’s key market was a new breed of computer users. Not only did they want to rebel against the existing way of doing things, but also they loved science fiction. (Take it from me—I’ve sold lots of science fiction in my career.) As a result, this content spoke its audience’s language.

This understanding became a core element of the Apple culture.

3. Use a classic story arc.

Deeper than Orwell’s classic tale was the David against Goliath narrative arc. Even more striking in 1984 was that the runner was a woman. While women’s lib was well entrenched in society, computer users were almost all men. At the time, Apple was literally David; it had tiny market share.

4. Include the element of surprise.

The ad incorporated emotion in the form of skillfully built up suspense and shattered it literally with a hammer blow. While built on the 1984 story, the ad changed the ending. Unlike Winston Smith, Apple’s runner is triumphant.

The ad was either loved or hated. Apple’s board didn’t like the ad.

The ad’s price, content and scarcity created buzz. In an era where marketers didn’t plan Super Bowl advertising support such as websites and social media, Apple planned 100 days of promotion for the Macintosh following the Super Bowl.

Where do most marketers go wrong?

The lesson: You need quality content to create and support your brand. It has to be unique to your brand, not chase the next Apple moment.

Take these 7 quality content marketing elements and apply them to your brand in a way that makes them new for your audience. To quote Apple: Think Different.

How have you used content quality to set your brand apart?