Buffer Is Losing Social Media Traffic: Are You?

How To Keep Your Social Media Traffic From Declining 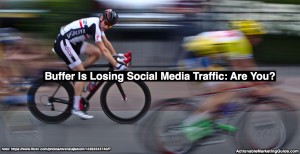 Social media is key to reaching your maximum potential audience for each piece of your content marketing.

Yet, how are you supposed to succeed in driving traffic via social networks when poster child Buffer admits it has a social media #FAIL?

In case you’re not familiar with Buffer, it’s a social media scheduling tool that uses its blog to attract prospects. It’s gained attention for its fast growth for 3 main reasons.

Before analyzing Buffer’s social media falloff so you can keep your social media traffic from declining, it’s important to note that we applaud Buffer and Kevan Lee in particular for their transparency in sharing this information.

We hope our analysis adds to the marketing community’s collective knowledge to empower all of us to improve our results. 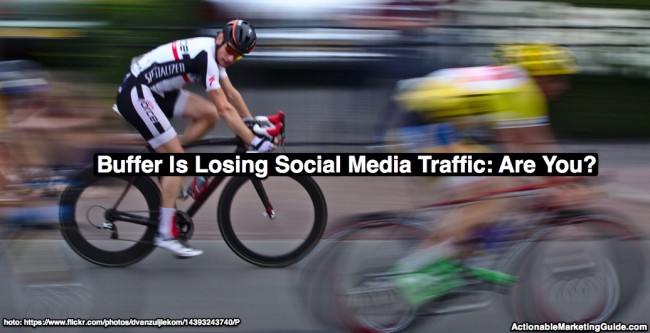 Most marketers have trouble tracking social media results directly. While traffic is a useful metric, it doesn’t necessarily translate to revenue-related activity.

A quick examination of their data reveals 2 issues you can easily correct on your Google Analytics. 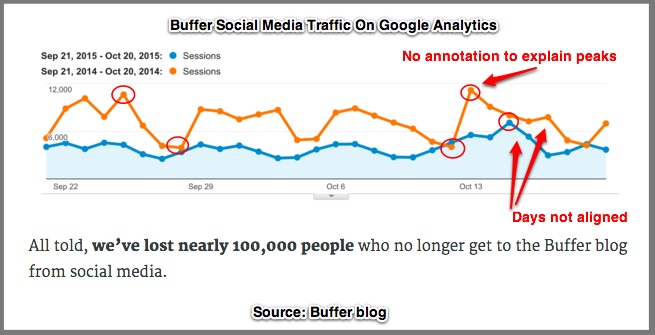 Understandably, Buffer didn’t present a full picture of their analytics so that the following factors can’t be assessed. That said, you should understand how your social media and other distribution channel interaction.

The social media traffic falloff problem may extend to other channels.

2. Changes in direct product competitors. As social media scheduling has become more important, other players have improved their products and new entrants have attracted attention.

Buffer built its reputation on its highly formulaic content in a crowed category, social media, that was original when it first appeared but, to paraphrase Rand Fishkin, others have learned from their success.

Content Problem #1 – A formula is easy to imitate. (It also looses effectiveness over time.)

“The consumer isn’t a moron. She is your wife.”

Aside: As a marketer you need a combination of high numbers and strong conversions since only a small proportion of your readers will convert. To this end, continually test every element of your offering.

Your content isn’t about you, even if you’re the target market for your product! It’s about your audience.

This is a key element of every content strategy. Without it, how can you know what your readers’ needs and pain points are? I give Lee credit since he openly admits he doesn’t know who his audience is. Say what???

This should be a no-brainer for Buffer. It’s a social media scheduling platform with free and paid users.

Translation: They can/do collect additional information about their users and use this information to enhance their content.

Other customer insight options include:

Providing different content formats increases your audience. It’s distributed on different platforms giving you more exposure and it reaches people who don’t like to read.

Since the Buffer blog grew based on guest blog posting, it’s surprising that it’s not a core element of their content. Patel has focused on his content efforts lately and has increased his guest posting on a variety of top tier blogs and media entities with high quality content.

During the past year, social media has continued to evolve beyond being solely a social network. Social media platforms have become full-fledged media entities that need to meet their own revenue targets.

Google+ has lost its status within Google. As a result, organic Google+ results have fallen off significantly. Larry Kim confirms that this happened to their G+ results. 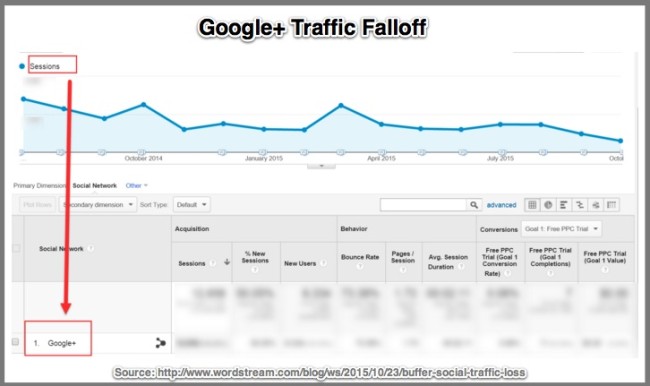 Buffer only discusses its use of 4 social media platforms.

Yet Content Marketing Institute/MarketingProfs research shows that both B2B and B2C marketers use an average of 6 and 7 platforms respectively. 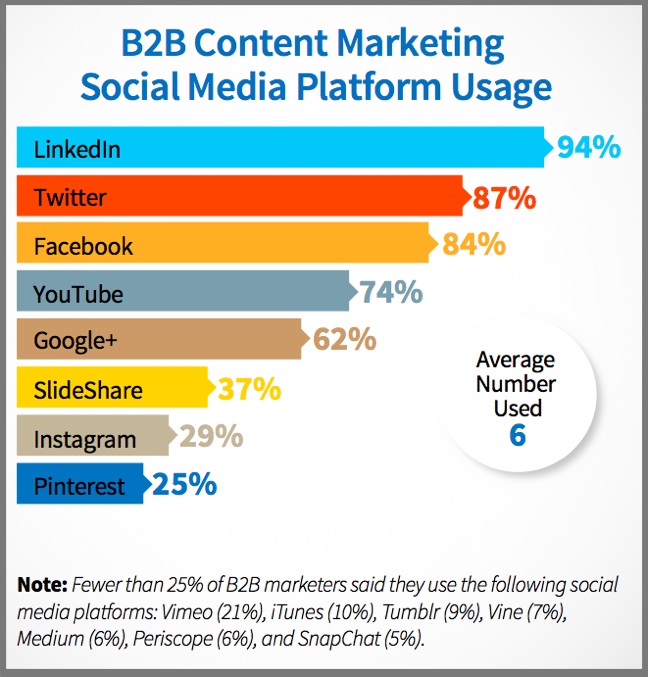 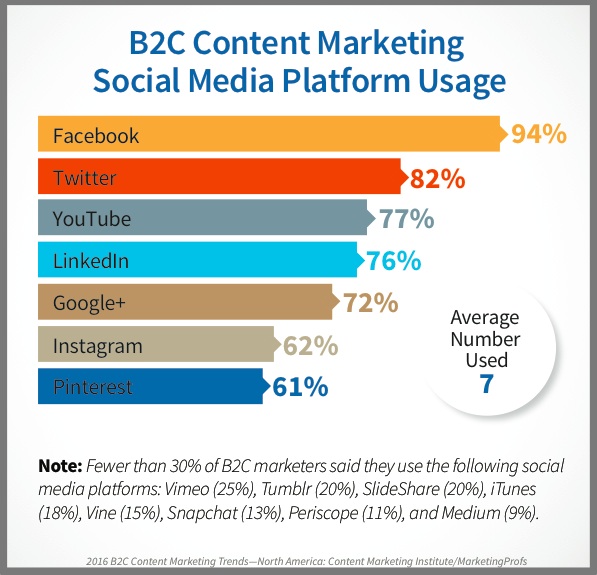 Use Pinterest. BuzzFeed, a Buffer competitor, has a vibrant Pinterest following. They have an employee focused on ensuring that results are as large as possible. Pinterest is BuzzFeed’s second largest driver of social media traffic. (Here’s a fuller analysis of social media shares.) 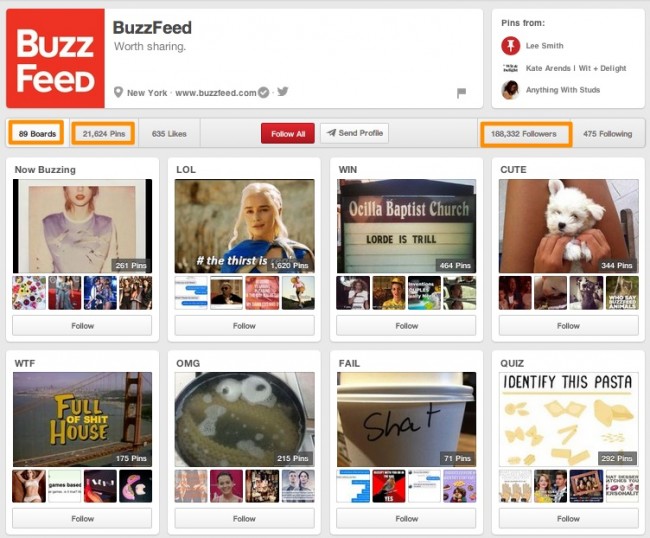 On the topic of social media the one element Buffer didn’t discuss was community. This is probably a bigger issue than the lack of headcount. They’re a social media technology offering. Community should be a core element of their DNA. Community is key for The Skimm.

What does Buffer’s experience mean for your social media traffic?

Your social media traffic is connected to the rest of your marketing. It’s not a once and done distribution exercise.

You need to start with high quality content that’s part of a well-planned content strategy associated with your business goals and your audience’s needs. It also requires an editorial calendar!!!

Choose your content focus with care to minimize your competition and meet your audience’s needs, even if they don’t realize they need it!

To maximize your social media reach, have an advertising budget. Numbers alone don’t do it!

Also, don’t leave your community with nowhere to go. Give them a reason to connect and participate.

How has your social media traffic been holding up?

One Response to Buffer Is Losing Social Media Traffic: Are You?