New book: The Creative Curve: How To Develop The Right Idea At The Right Time 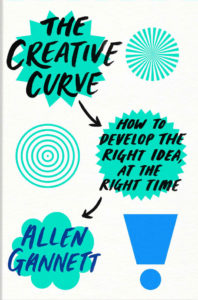 Q: What’s your best piece of advice for readers looking to improve their marketing?

A: Thanks for taking the time to chat with me Heidi! I’m a big fan of everything you’ve done with the Actionable Marketing Guide.

So, here’s my best piece of advice for marketers: Good marketing is good storytelling. And if you want to be a good storyteller, you’ll need to get good at listening to your audience.

Your audience is the best teacher around. It can tell you which of your stories are resonating, which are getting old, and which they can’t wait to hear.

But it can only tell you if you listen. Data is the conduit through which these insights pass. If you don’t have a developed strategy for data analytics, you’re cutting yourself off from one of your most valuable sources of information.

Marketing without data-driven listing is like playing Marco Polo with earplugs in.

Q: What was the inspiration for The Creative Curve?

A: I’ve always been addicted to decoding patterns.

When I was a kid, I’d play video games for hours trying to figure out the patterns behind the computer player’s AI. In high school, I decided to try to decipher the pattern behind gameshow contestant selection. It took me a couple months, but ultimately, I was able to get on Wheel of Fortune. I can’t tell you the whole game show selection formula, but I can confirm that copious amounts of caffeine and a creepy Elmo voice were key components.

After tackling gameshows, I decided to turn my pattern spotting powers to something slightly more significant: marketing, and more recently, creativity.

Creativity holds a special place in our society. It’s one of the most important things people look for in a company, a new hire, even in a romantic partner. But, though many have tried, no one has yet succeeded in decrypting the pattern behind creative success.

That was the inspiration and the goal of this book: to discover the pattern behind creative success and show readers how to put that pattern to use in their own lives.

Q: What is the key concept behind the book?

So, the key concept that this book is built around is, you guessed it, the creative curve. 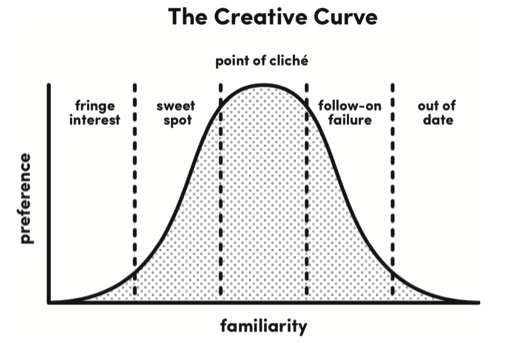 The creative curve is the answer to the question that inspired the book: Can creativity be systematized?

Through training and experience, creative geniuses learn how to build ideas that land perfectly on the creative curve—ideas that are novel enough to be interesting, but familiar enough to be accessible. That’s the secret behind creative success in any field.

I distilled everything I learned during my two years of research into four unbreakable laws that all creative heavyweights—from authors to animators, investment bankers to ice cream makers—rely upon to create a hit.

Follow those rules and you’ll significantly up your chances of creating a creative blockbuster.

Q: What do you want readers to take away from your book

A: If I could have readers take one thing away from my book it would be this: creativity isn’t magic, it’s a muscle.

When we’re growing up, we hear countless stories of creative geniuses magically struck by revolutionary ideas. Isaac Newton is just sitting around, minding his own business, and then BAM! He suddenly discovers gravity (with a little help from a falling apple).

There are two problems with this “Myth of Magical Creativity.” First, it’s super disempowering. If we assume the myth is true, then the only way to be creative is to sit around and wait for a great idea to appear out of thin air. If we’re really impatient, maybe we can speed things along by sitting under a fruit tree.

But there’s a bigger problem with this myth. It’s totally wrong! During my research for The Creative Curve, I spoke to dozens of creative geniuses and scientists specializing in the study of creativity.

These conversations provided me with a mountain of evidence—both academic and anecdotal—that creative ability isn’t something you’re born with. It’s something you build, and most creative geniuses follow the same four-step path to generating an innovative breakthrough.

You can improve your creativity. You just need to learn the steps.

Q: How do you describe yourself professionally?

A: My goal is to help the world become more creative. I believe that most of us have a ton of creative potential that we’re not using. But while tons of people are willing to exercise more or eat healthier, few people decide to revamp their creativity habits.

And I’m passionate about helping you figure out how to make that happen.

Q: What are the books that inspired your work/career?

Mark Manson, The Subtle Art of Not Giving a F*ck. The book is as thought-provoking as its title is edgy. In a world where so much demands our attention, Manson offers an antidote: caring less about the little things so that you can care more about the big ones.

Ed Catmul, Creativity, Inc.  Catmul is one of the co-founders of Pixar, and his book is a deep dive into the creative culture at Pixar. It’s extremely engaging. If you’re interested in the artistic process and innovation, this book is a must read.

Ben Horowitz, The Hard Thing About Hard Things: Building a Business When There Are No Easy Answers.

This is a fantastic book that takes an honest look at the difficulties of building a business from the ground up. It’s filled with honest, hard-nosed, and—most importantly—valuable advice for entrepreneurs. Pick up a copy, you won’t regret it.

Q: What is the biggest challenge that you’ve had to overcome in your life or career?

A: I’m an overthinker.

A lot of the time, this helps power my professional and creative success: if I’m stuck on a tricky problem, I’ll grind it over in my head until a solution appears.

But, on the not so rare occasions that this overthinking focuses on something that can’t be solved by repeated rehashing, my brain can get kind of stuck (e.g. “I wonder if the people in that meeting thought I was steamrolling them? I’d better think about it for hours.”).

I know a lot of people struggle with overthinking, especially in my line of work. I’ve had some success “scheduling my overthinking.” I’ll set aside a 10- or 20-minute block for reanalysis of a decision or discussion, and then won’t allow myself to ruminate on the topic until that time comes. It’s a method that’s pretty commonly used for “worrying, and I’ve found it equally effective for turning down the dial on overthinking.

Q: What’s something unusual or fun that most people don’t know about you?

A: Well, I already partially spilled the beans, but for a while I was pretty good at finding my way onto game shows.

In addition to Wheel of Fortune, a few years ago I was cast on MTV’s Movers and Changers, a cheesy business competition hosted by Nick Cannon.

The show was similar to what Shark Tank would later become, and again, I lost. My business idea was judged by some well-known personalities like CNBC’s Jim Cramer, who voted me off the proverbial island, or as he would say, sell, sell, sell!

After the back-to-back losses, I decided to return to the couch and stick to shouting answers at the T.V. But who knows that the future might bring…

Q: Is there a piece of content, a social media campaign or a marketing campaign that you worked on that you’re particularly proud of?

A: I’ve been writing a weekly newsletter on creativity for the past half-year! It has some pretty great science-based tips for training your creative muscle. If you’re interested, it’s easy to sign up.

A: Do something creative today! I think creativity is one of the most powerful and positive forces out there. The world needs more of it. 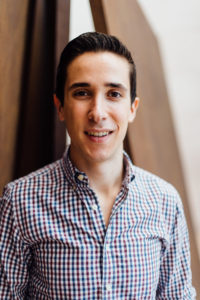 Back to the Actionable Marketing Guide Author Interviews