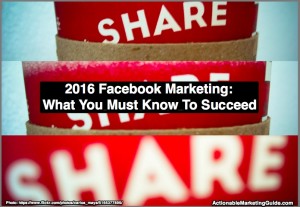 Your 2016 Facebook marketing strategy is vital to your business success.

Facebook continues to be the social media giant that can’t be ignored by marketers regardless of location or type. Its 4Q2015 earnings report confirm this.

To appreciate Facebook’s full strength, examine their 4Q2015 earnings. (As a point of comparison, here are Facebook’s 4Q2014 and Facebook’s 3Q2015 results.) 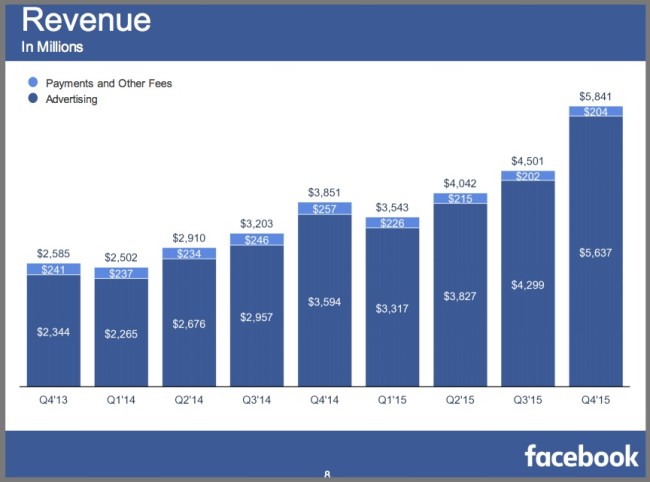 Facebook’s revenues are skewed in terms of source and geographic location. 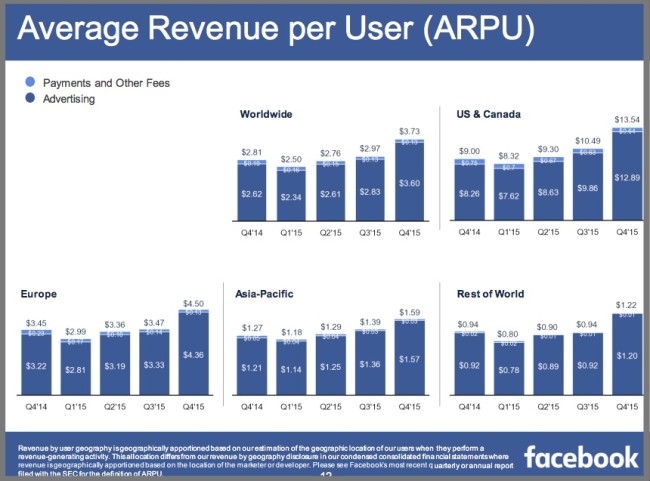 While these results are strong, the inherent problem is that the US is still driving revenues despite expanded users globally. Increasing users outside of the US doesn’t and won’t increase the bottom line.

Based on members, Facebook continues to dominate the social media playing field. As a marketer you must be present to capture some portion of your target audience’s attention. 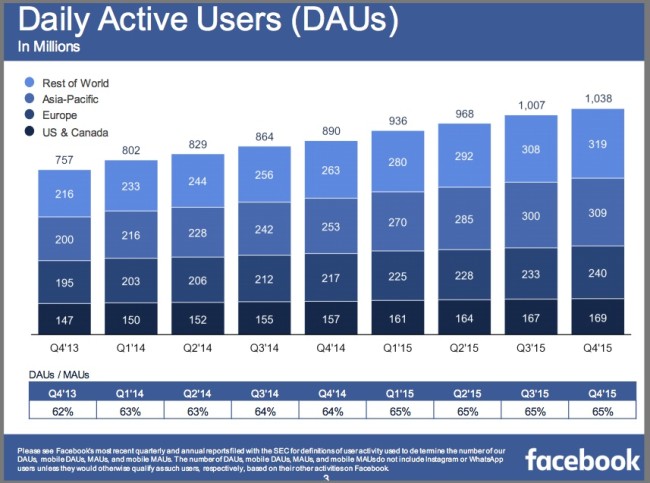 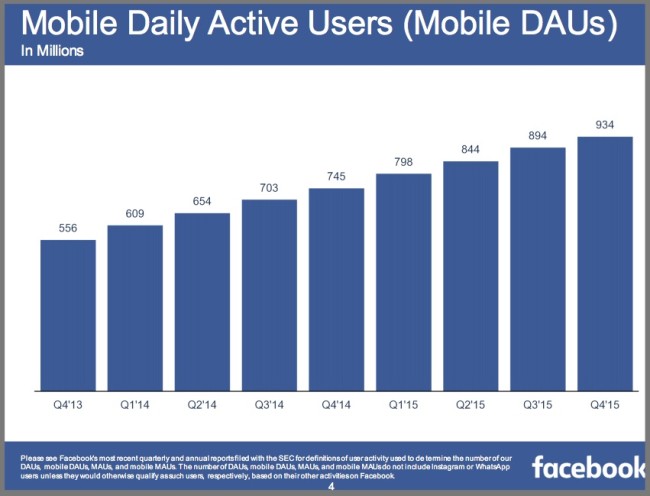 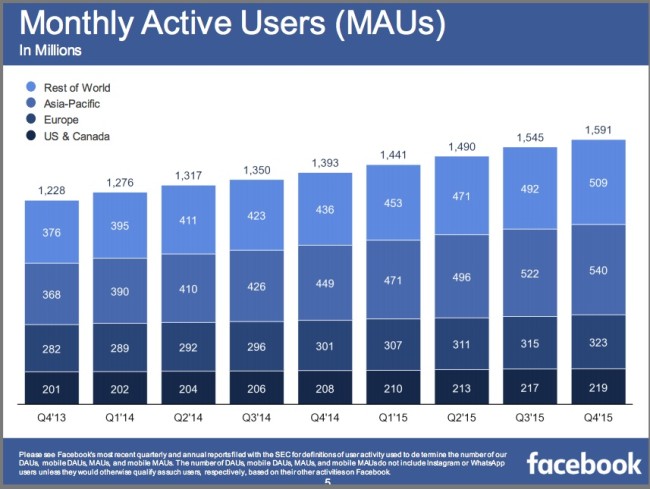 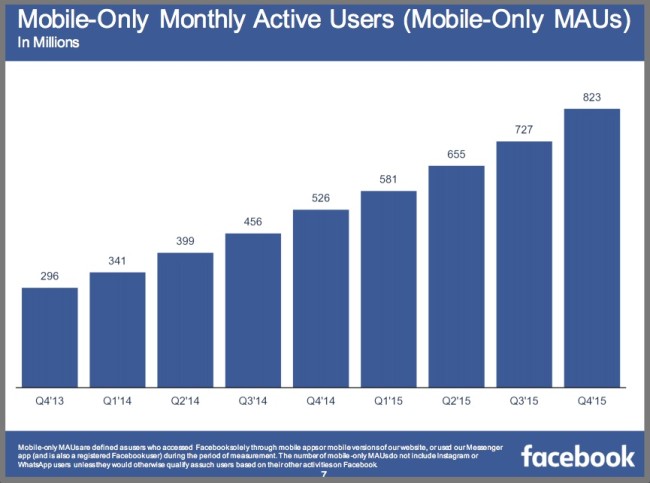 2016 is the year of contextual marketing. Where what, when, why and how your audience accesses and consumes your content to meet their immediate needs is key to entering and staying in the consideration set.

Nowhere is this more clear than Facebook. Don’t take my word for it. Look at the numbers. 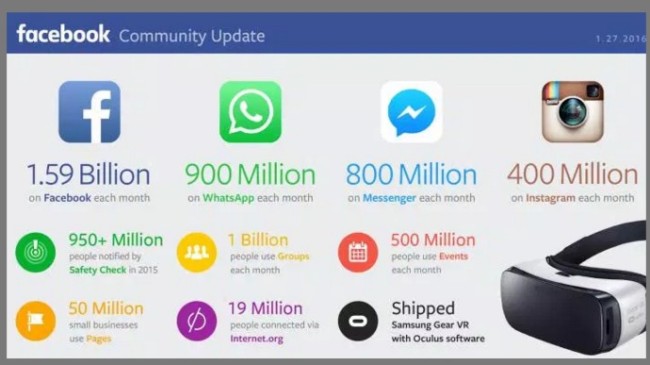 Facebook is a full-fledged media entity. Where other strong media entities have diversified, Facebook’s revenue stream is only focused on advertising. Unlike other media entities, namely LinkedIn, it’s not monetizing its subscriber base nor is it offering any standalone products.

This is a difficult challenge.

That said, Facebook is skilled at evolving to meet current member needs in a dynamic environment through smart acquisitions and integration such as Instagram and WhatsApp.

Facebook leveraged and grew Instagram into the new “IT” social media platform. By contrast, Yahoo’s acquisition of Flickr caused the earlier photo platform to languish. Flickr’s went from the photo darling to be to nowhere. In the early 2000s Flickr was where small firms built their photogenic presence.

Now Instagram is the place where brands and people strut their stuff. A NYC trainer confided that she used Instagram, LinkedIn and Facebook to market her business. 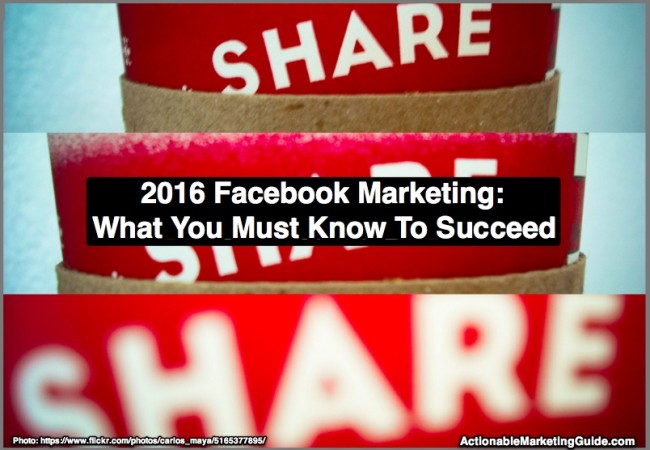 These 2016 Facebook marketing tactics are aligned with our 2016 marketing trends. They underscore that 2016 is the starting point for contextual marketing!!!

This is no longer a nice-to-have. You need to be visible where your target audience spends their time. This includes B2B marketers.

Don’t forget: You have to market P2P, person-to-person. Your target audience is composed of people.

Maintain your branding with your page. (To help you, here are 35 social media branding tips.)

At its core, Facebook is a social media entity where you must be a person with a human face. This applies to all types of organizations: B2B, B2C, not-for-profit, solopreneur and media.

Be active on a regular basis. Your goal is to become part of your target audience’s Inner Circle.

3. Engage with your niche’s influencers

Extend your relationships with key influencers.

Think: Power of Other People’s Audiences! You want your brand and employee’s names to appear in their feeds. It’s the uberization of content applied to the Facebook stream.

Pay-it-forward. Remember social media isn’t about you! It’s about your audience.

For example, I received a major network press inquiry for a Los Angeles based social media influencer. Since I’m New York based, I recommended Rebekah Radice. When she got the slot, she shared the news on Facebook and thanked me. 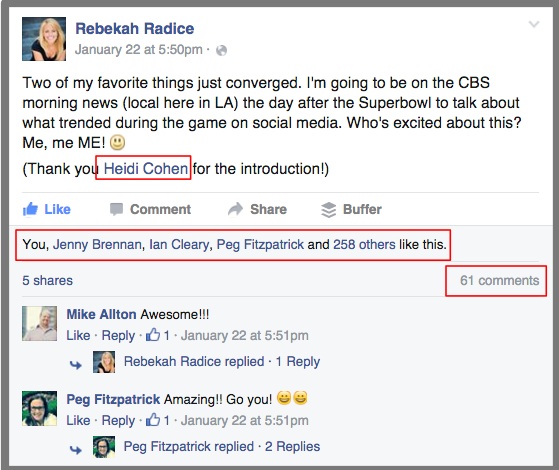 Be visible when and where your audience is available. You probably can’t build this level of relationship on your own.

Expect Facebook to invest to strengthen its hold on your target audience’s attention. Pay for Facebook mobile advertising to enter the consideration set or risk being left behind.

Facebook is spending to provide a viewer experience that keeps people on their site longer.

Facebook is changing the video landscape with a dedicated video feed (shows videos viewers didn’t know about), related videos and picture in picture (think like a tv and music option. Together they keep viewers engaged. Think native social media advertising.

With the ever-changing Facebook algorithm, you have to pay to play on this social media platform. Otherwise you’re invisible to your target audience.

On the positive side, use your advertising budget to tap into Facebook’s mountain of micro-data about your customers.

While many marketers complain they can’t track social media and content marketing results, measure your Facebook performance using their analytics.

Facebook COO Sheryl Sandberg expects Facebook will steal portions of advertising budgets from other platforms. Translation: Your 2016 Facebook marketing budget will increase at the expense of other media options.

What’s your favorite 2016 Facebook marketing tactic? What do you base it on?

One Response to 2016 Facebook Marketing: What You Must Know To Succeed