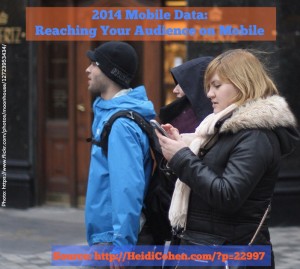 Is your firm, product and/or brand findable when your target audience looks for it on a smartphone, tablet or other mobile device?

If you’re not sure of the answer to this question then you have work to do. Since today’s customers, especially millennials, want information when they’re seeking it, in the form they want and via the device they’re using at the time.

For consumers, information is no longer, one device fits all, especially for digital content formats. 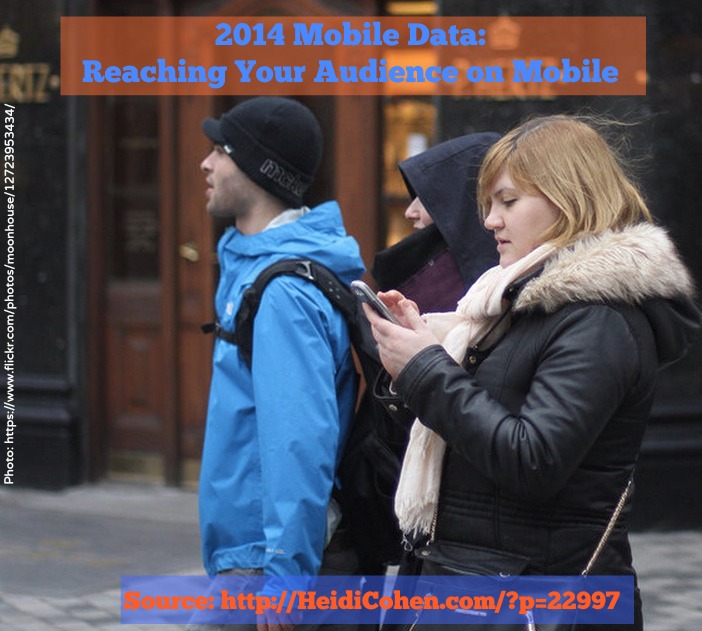 To get your 2014 marketing aligned with your market’s information consumption habits and needs, here is 2014 mobile data. (For a point of comparison, here’s our last 2013 mobile data roundup.)

148 million Americans age 13 and older own smartphones and 72 million own tablets based on data from comScore. 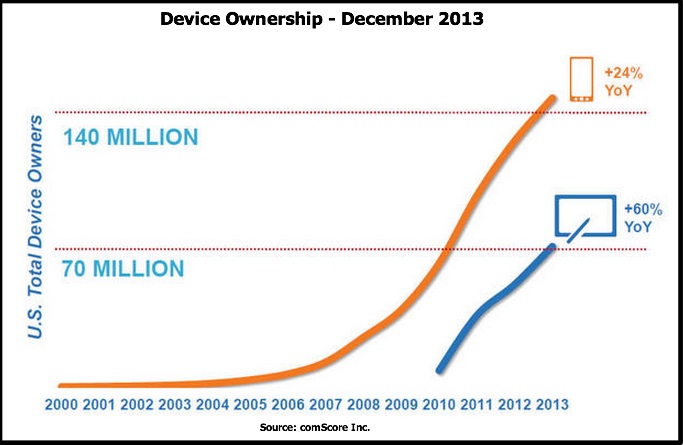 Smartphones have 65% penetration in the US and still growing according to comScore. 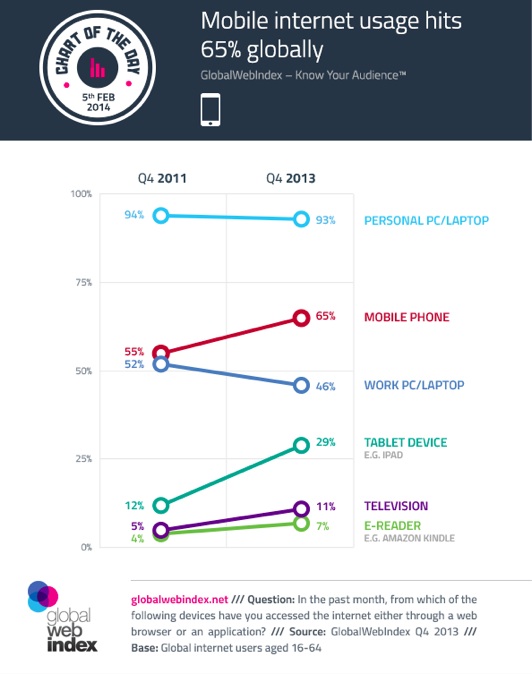 59% of US consumers connect to the Internet via a mobile device. 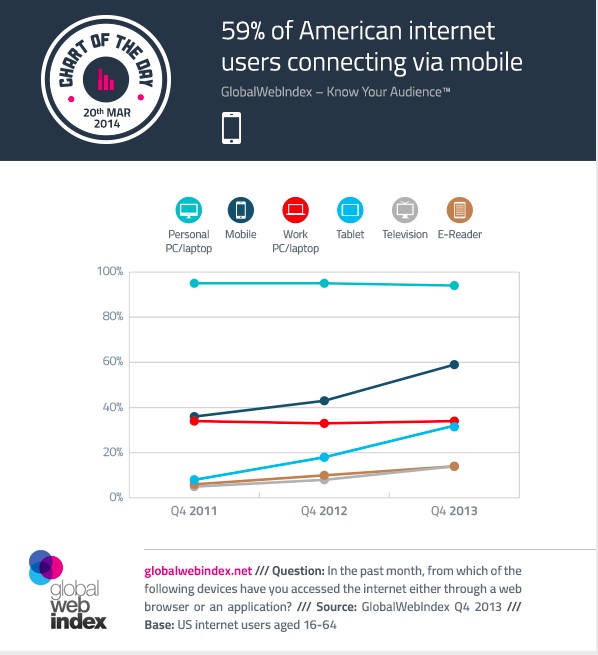 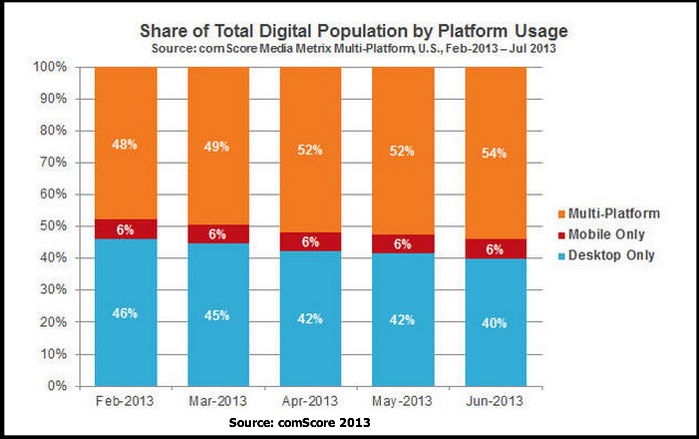 Mobile is 2014’s media cannibalizer. (Here’s a full analysis of how Americans spend their time with media.) 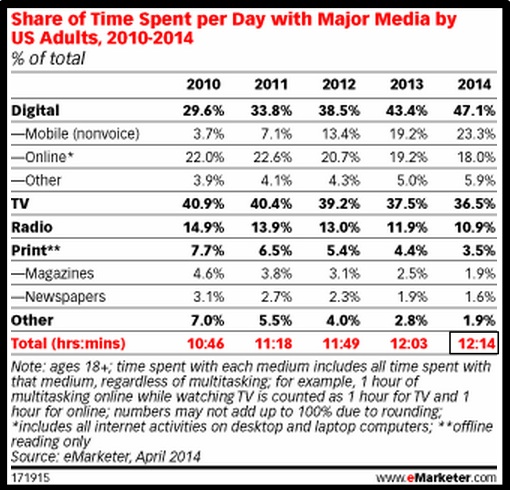 US adults are shifting their time spent with major media and devices towards mobile. Given that the mobile penetration rate in the US has passed 50%, this growth has slowed. Of interest is the high growth of mobile video time followed by social media. 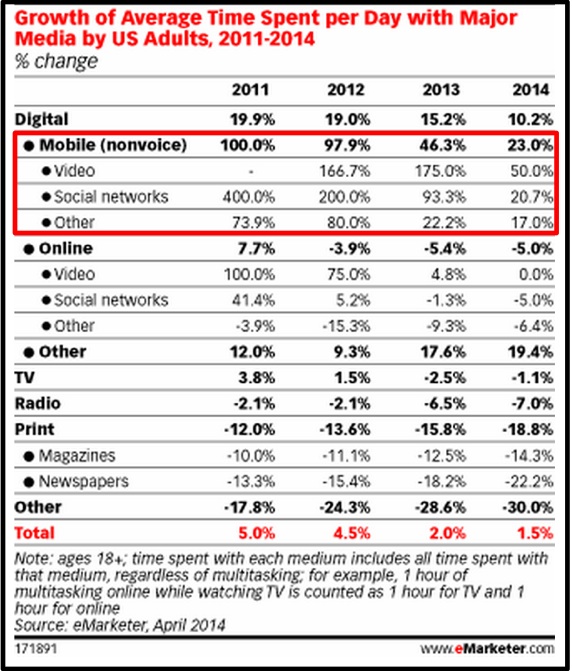 85% of global Internet users have multi-screened (or used another device) while watching television. To put this in perspective, television viewers have used television as a background for other activities such as telephone calls and reading for years. 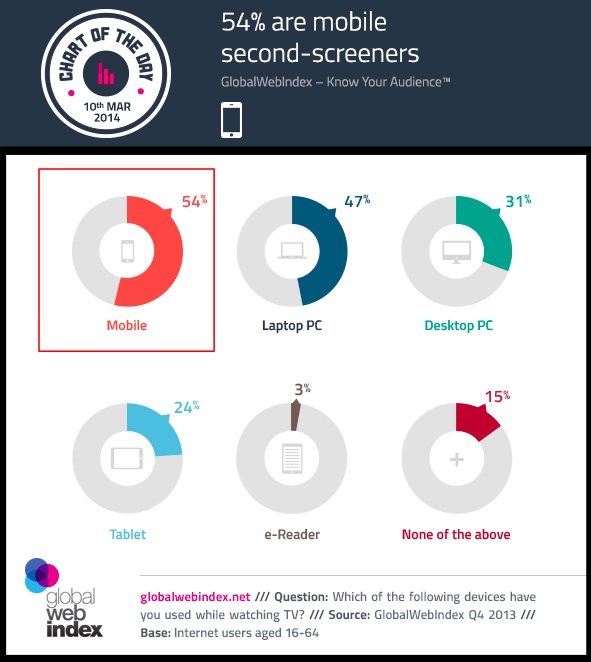 Time spent on a mobile device by the average US consumer increased to 2 hrs and 42 minutes per day according to Flurry. (BTW–Mobile is where you’ll find millennials.) 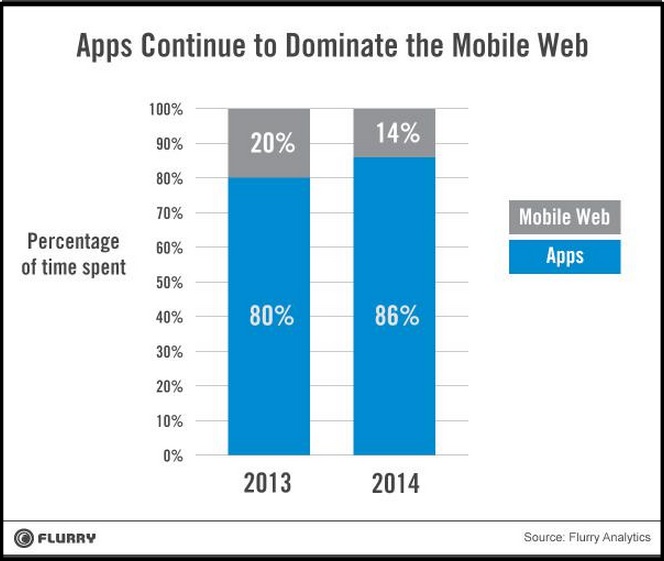 Take a deeper look at how we spend our time on connected devices broken out by apps and browsers. Google, Apple and Facebook stand out. 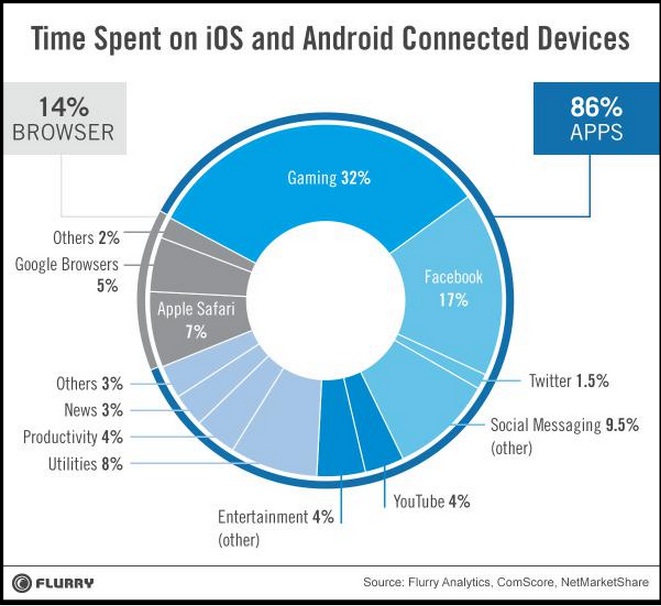 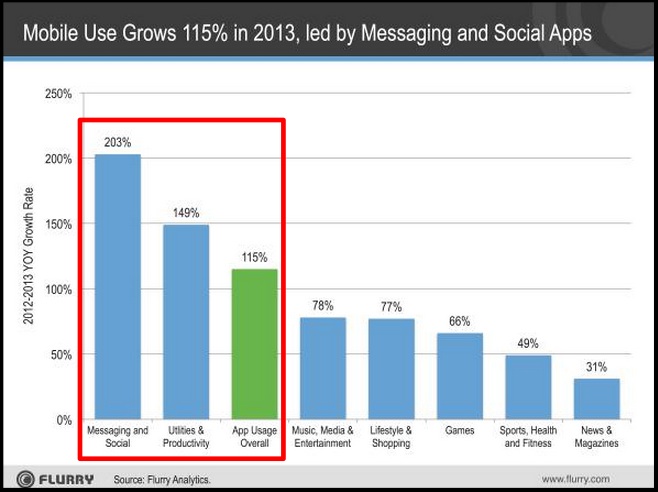 Marketers and publishers need to assess mobile usage by platform and media entity since mobile-only audiences may account for the majority of the audience. This matters for Apple, Pandora and Buzzfeed. 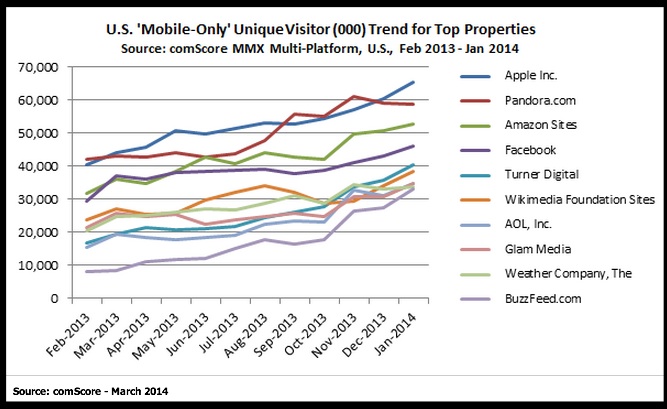 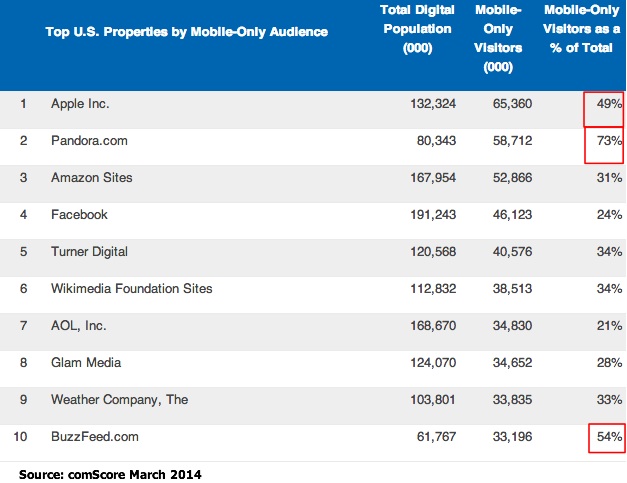 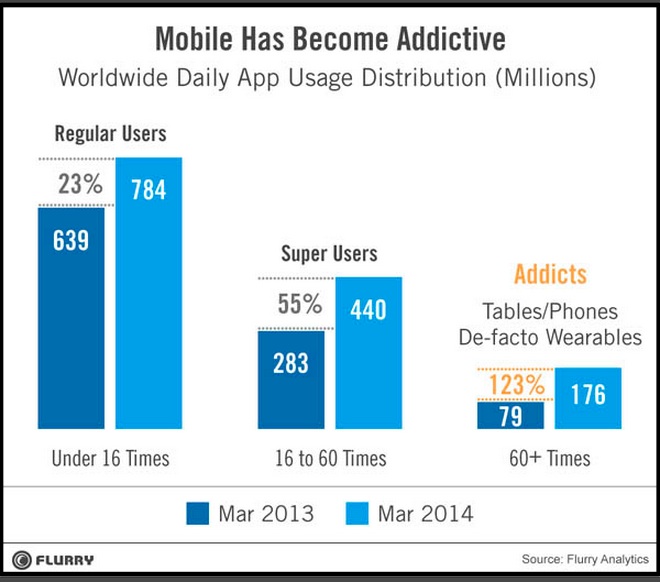 Middle-aged consumers are 28% of mobile addicts and 20% of average mobile consumers. 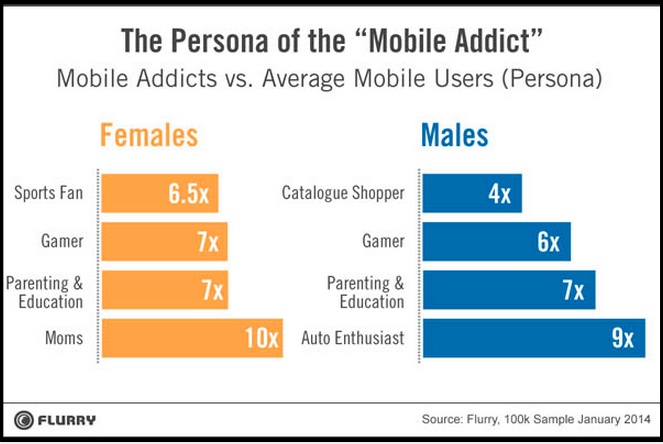 Based on Local Corporation and the e-tailing group research, you need to include mobile search in your marketing plans. 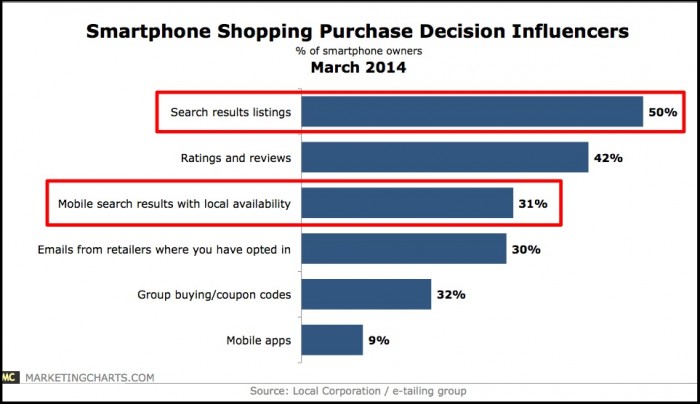 Want to build your mobile marketing list? Then make your prospects an offer they can’t refuse according to November 2013 Responsys mobile research.

59% of US mobile device users will sign up to receive special offers and promotions. Further, 50% of US mobile users are enticed by sales. 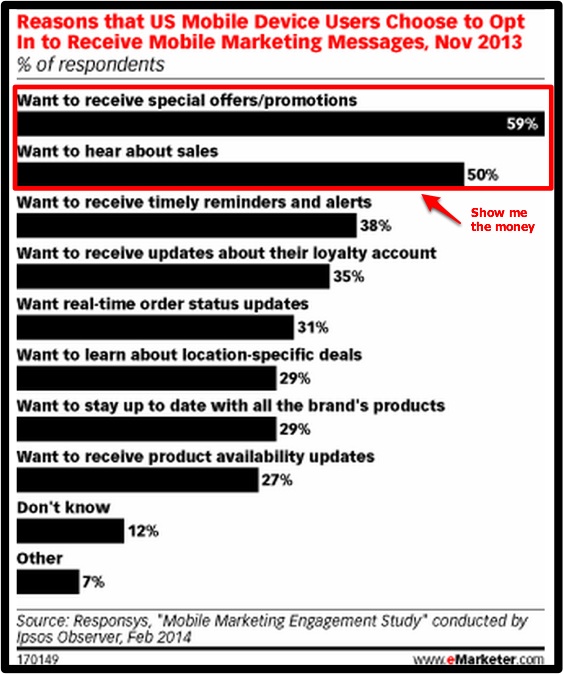 Understand that signing up to receive your marketing and promotional messages is only the first step along the mobile purchase process. You need to motivate your audience to buy. Hands down, two-thirds of respondents are actively seeking lower prices in the form of special deals. 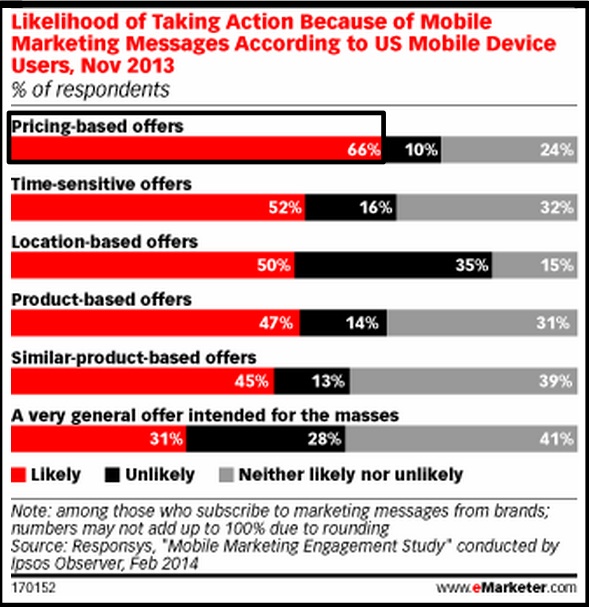 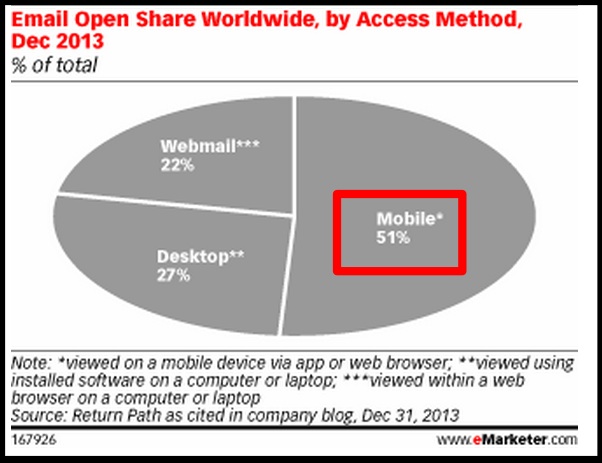 Format your email marketing for smartphone and tablet consumption. Don’t assume that the email that you’ve been sending will render in an easy-to-consume way on a mobile device. Test your email across a variety of handsets and devices. Mobile email is a marketing must-have not a luxury. 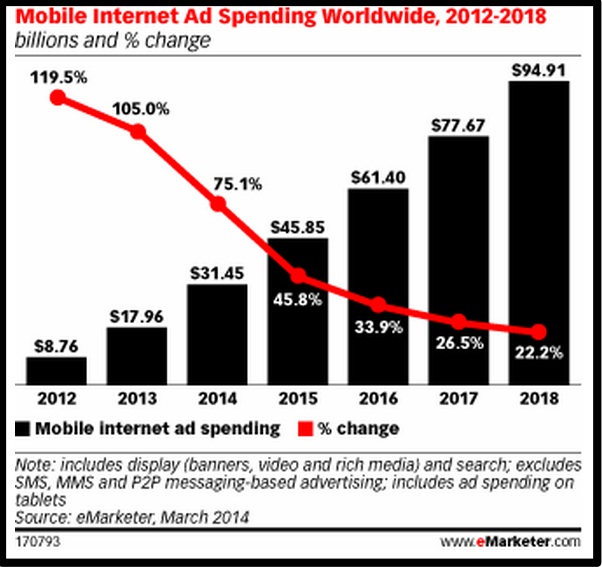 While the increase in mobile advertising spend is dramatic during this high growth phase, a deeper look at the data reveals that Google and Facebook experienced net mobile ad revenues increase by $6.92 billion. This was 75.2% of the incremental $9.2 billion of mobile ad spend in 2013. These 2 firms are consolidating their places at the top of the mobile ad market. 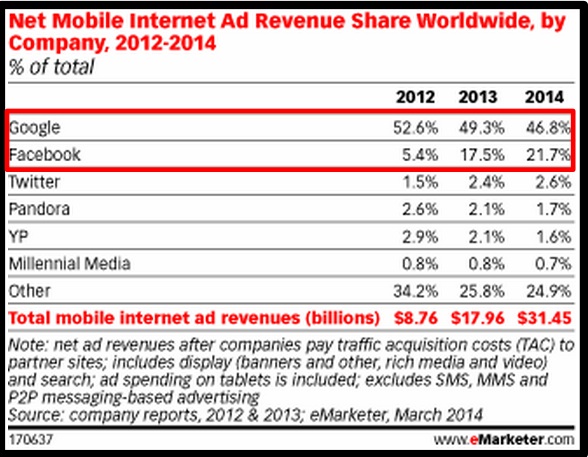 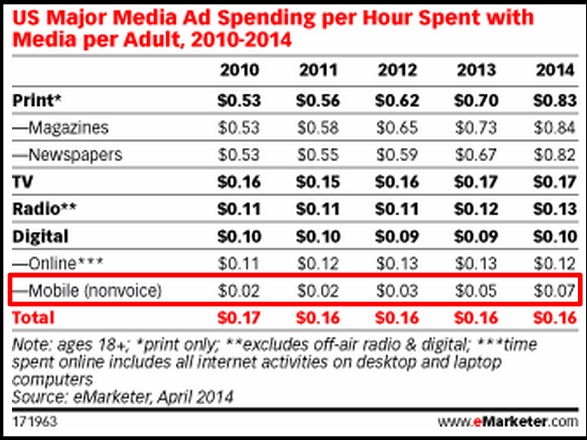 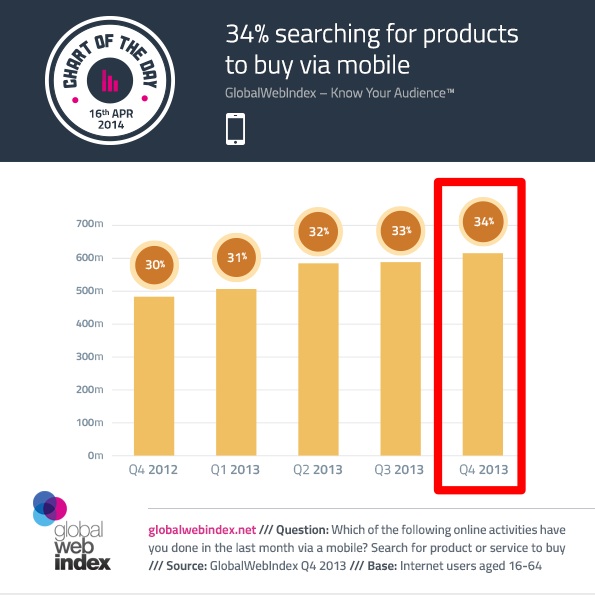 Additionally customers are using multiple devices for commerce. 27% of global Internet users employ than one device to shop online. 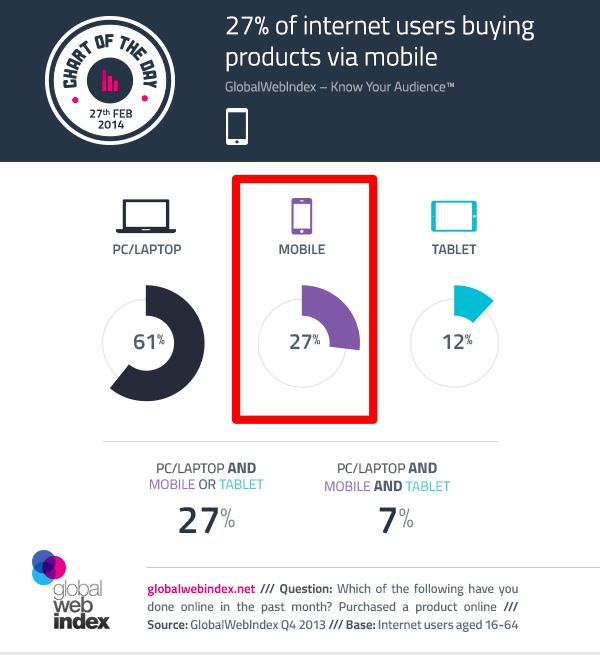 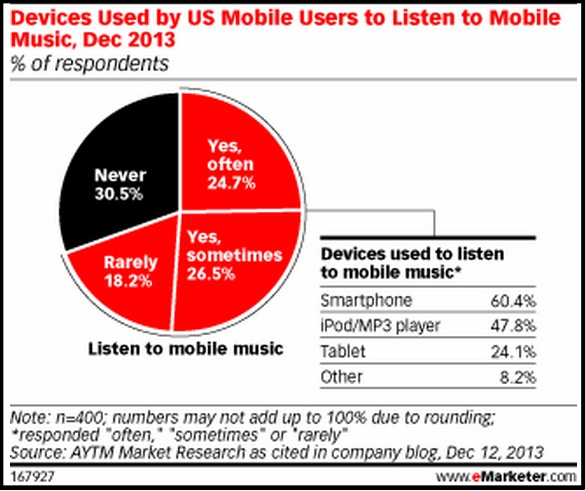 But only 27.6 % of these music listeners are willing to pay for their music. 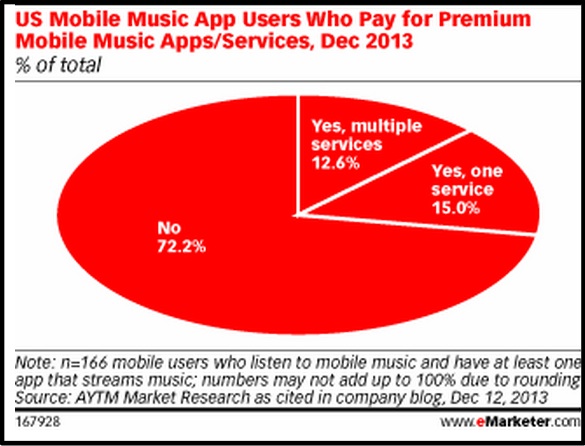 Both smartphones and tablets are used as gaming devices. About half of US smartphone gamers do so to relieve stress and another third do so to fill time. Most of these gamers spend less than a half hour a day on games. 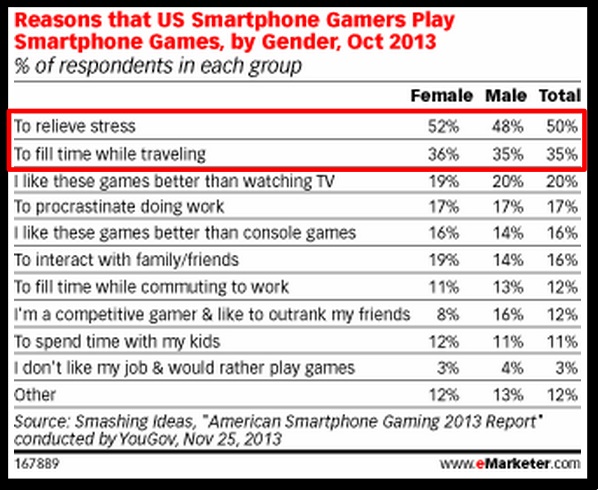 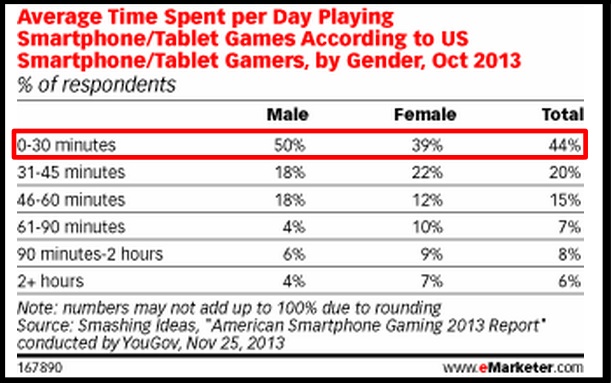 To reach your target market, you must put your content and communications where your audience spends their time.

Based on 2014 mobile data this means mobile – both smartphones and tablets.

Further your content must provide a seamless multi-channel experience. This is particularly important for millennials.

Additionally don’t forget to make it easy for mobile users to purchase once they’ve made their minds up.

What other 2014 mobile data has had an impact on  your marketing? What is your biggest mobile challenge?

One Response to 2014 Mobile Data: Reaching Your Audience On Mobile?