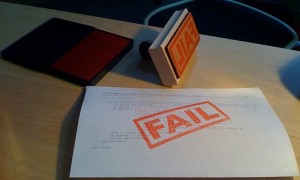 On Twitter, the Fail hashtag, #Fail, is used to mark something that went wrong, from a misdialed phone number to a major public event. It’s so popular that The Cheezburger Network introduced the FailBlog whose success spawned competitors like Epic Fail where readers post and vote on funny photos.

Social media provides networks and functionality that enable users to widely and quickly distribute their messages. As many corporations have discovered, despite good intentions and best efforts, these platforms amplify and disperse negative messages at exponential rates.

Since social media marketing can go from one tweet to a trending topic in the blink of an eye, it’s important to continually monitor the social media landscape for potential hot spots that can blossom into PR issues, and have a crisis management plan ready to respond. The biggest social media fails of 2010 were:

These three failures, involving a company, a celebrity personality and a country, provide the lesson that, with social media, acting quickly and decisively is critical. To combat social media fires that lead to social media fails, social media monitoring combining corporate social media guidelines and effective engagement of prospects, customers and the public is needed. The challenge is cutting through the noise and determining which conversations and dissatisfactions can ignite a social media fire that’s easily fanned into a prime time news debacle.

Were there other social media fails in 2010 that should be on this list? If so, please add the event and explain why it should be there in the comment section below.