19 Reasons To Add Pinterest To Your Social Media Strategy

Pinterest, the image based social media site, tends to attract participants interested in home decorating, crafts, fashion, and food. Regardless of your business focus, you need to better understand what Pinterest has to offer your business and its social media marketing.

To see where you can integrate photographs and images into your content marketing to fuel Pinterest engagement, examine some recent research data to see where there are opportunities. Here are ten charts and nineteen facts about Pinterest to help you use the social media site. (For further convincing, here’s seven reasons photographs support marketing, especially social media.)

Pinterest has experienced exponential growth of over 4000% in the past year according to comScore. It’s growth rate has exceed all other sites except Google+ (which isn’t shown in this chart.) 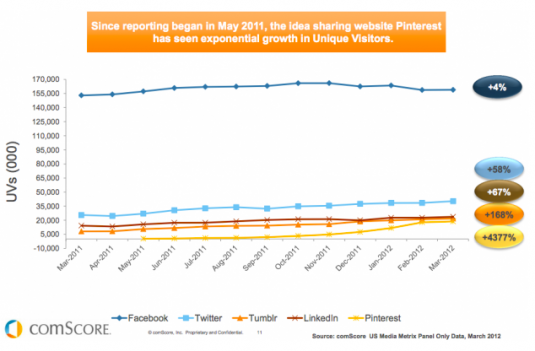 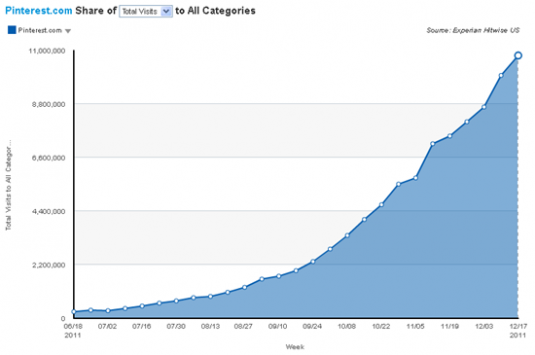 Pinterest participants are deeply involved. They spend an hour and seventeen minutes per month on Pinterest according to Statistica reported by AllTwitter. They only spend more time on Tumblr and Facebook. 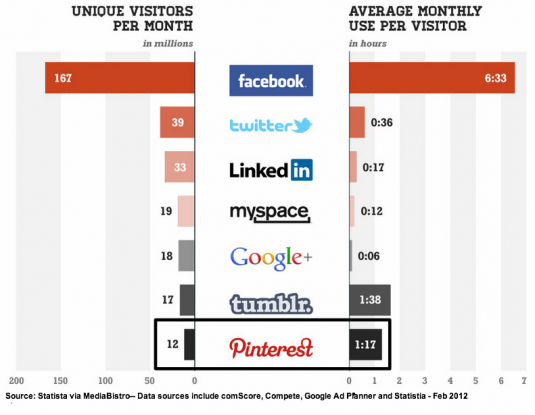 Pinterest encourages viral activity as shown by the number of repins. Specifically over 80% of pins are repins as reported by RJ Metrics. This makes sense since repinning is significantly easier than searching for new content, checking whether it can be pinned and writing a description. 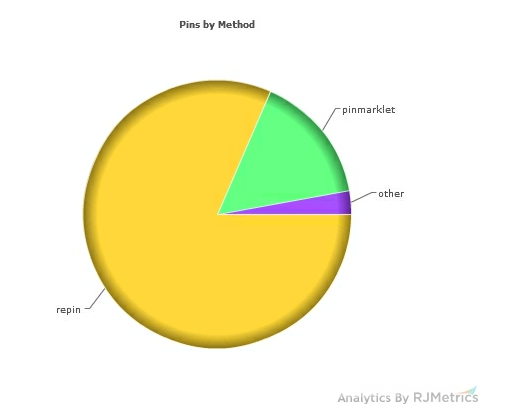 Pinterest’s high growth has resulted in erosion in the quality of new users as seen in the number pins in the first month by new members via RJ Metrics. 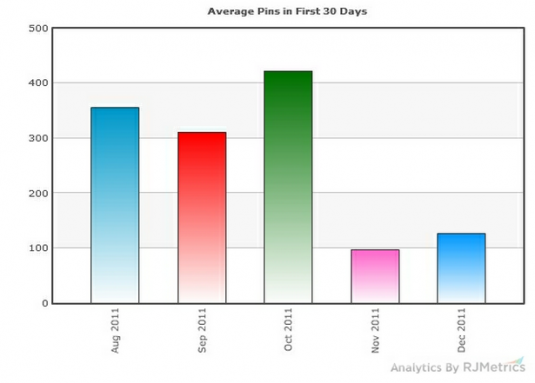 As with any marketing plan, it’s critical to understand your target audience. Where social media’s concerned, develop a social media persona. Here’s information about Pinterest’s audience to help you.

What do participants pin?

US pinners are interested in crafts, special event items, hobbies and leisure, interior design, fashion and blogging resources according to Visual.ly. 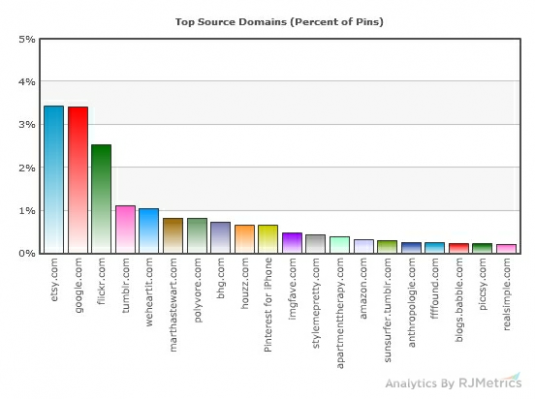 Pinterest is growing in its ability to drive traffic to other sites. In February, Pinterest referral traffic surpassed Twitter while Facebook’s referral traffic declined according to Shareaholic data. This has important implications for marketers looking to use Pinterest to drive prospects to their website. 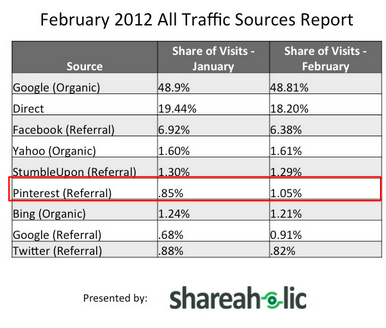 Pinterest’s partitipants’ buying power is only second to those of LinkedIn. Given the B2B nature of LinkedIn, it’s possible that these transactions tend to be larger in size.

Pinterest shoppers spend more, buy more items, and make more purchases than other social media buyers including Facebook and LinkedIn according to comScore. 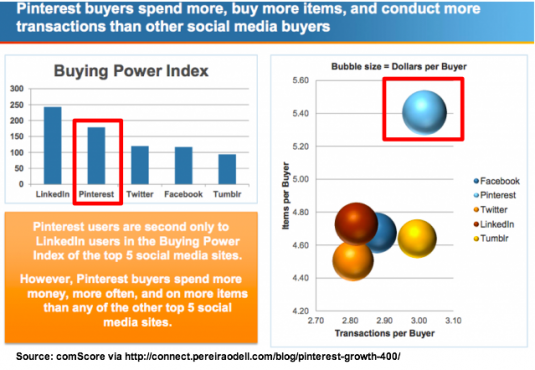 Looking for sales from social media? Then include Pinterest in your marketing mix based on data reported by  Monetate’s Kurt Heinemann reported this data in All Things D.

Pinterest received $100 million investment from Japanese firm, Rakuten as reported by All Things D. This investment raises  Pinterest’s valuation to  $1.5 billion. In part, this is attributable to Pinterest’s meteoric growth as well as its ability to drive sales for diverse businesses.

Given Pinterest’s visual nature and its participant base’s interest in hobbies, decor and clothing, it’s not surprising that most of the top brands fall into one of these three categories. The top 10 most popular brands on Pinterest were as follows based on Statista’s analysis of follower numbers in February 2012.

Given Pinterest’s easy-to-use nature combined with its visual focus, here’s a list of Pinterest’s 10 most active pinners based on the number of followers as reported by Statista’s analysis of follower numbers in February 2012.

Given the power of photographs and images in social media today, adding Pinterest to your marketing mix is a must-have. To make an informed decision as to how to use Pinterest effectively, it’s important to understand how this social media site is evolving as indicated by the research.

What other Pinterst data would you add to this list? Please reference your sources.