Do You Know What Your Audience Is Doing On Social Media? 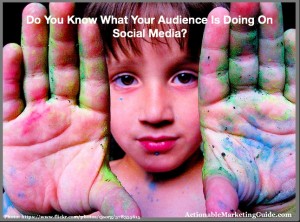 You must incorporate social media into your 2015 marketing plan as an integral element of your content, communication, interaction and promotion.

Concurrently, social networks continue to mature in their own product life cycles becoming serious businesses and media entities that must generate revenues, profits and returns for investors.

Therefore, think like an old school journalist to understand the social media behavior of your audiences. This encompasses your prospects, influencers, customers, users, employees, media, and investors.

Specifically, know the following about each of your key audience’s social media behavior in 2015. These questions are key to developing social media personas that should be updated at least annually.

Based on 170,000 Internet users aged 16 to 64 in 32 markets, Global Web Index data provides broader insight than many other research offerings (including Pew Research’s results that we analyzed last week). It examines behavior globally across a broad cross section of platforms, many of which are often overlooked.

Here are 5 key social media behaviors in 2015 that must be integrated into your plans to effectively leverage the power of these networks to support your marketing cost efficiently. (BTW, here are our 2015 social media predictions with 27 tactics and here’s 2015 small business social media trends based on UMass Dartmouth research.) 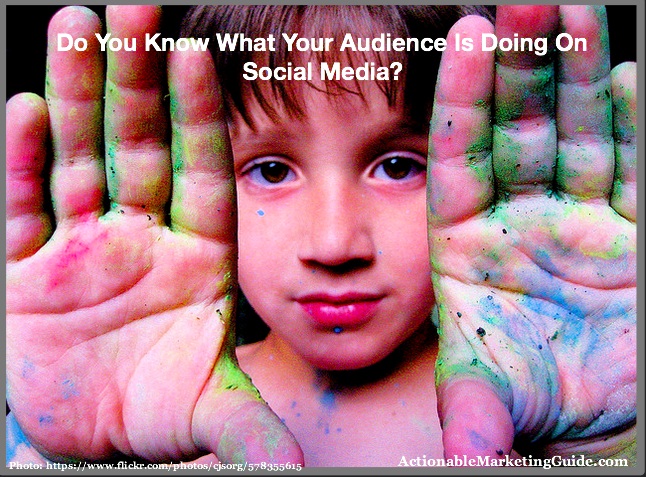 Facebook still dominates social media globally based on size. YET, it trails Google+ in the Chinese market.

Globally the Top 4 social media networks in order of size are:

While not Top 5 social media platforms, LinkedIn and Instagram are in the Top 10 globally (with and without China). 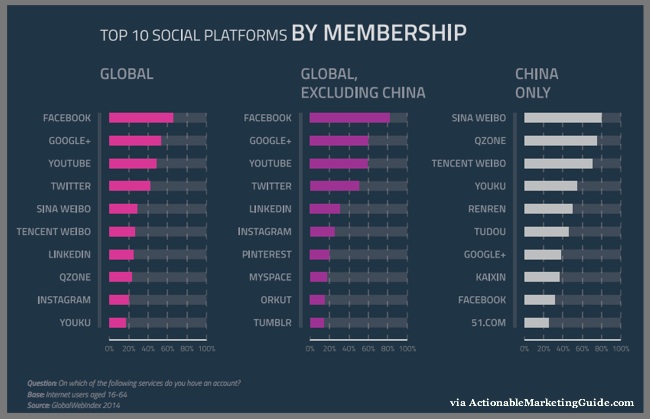 (BTW, as a point of comparison, you may be interested in seeing content search vs social media.)

Don’t limit your social media choices to Facebook, Twitter, LinkedIn and Google+ or you may miss significant opportunities.

Both Pinterest and Tumblr increased active users over 95% in 2014.

LinkedIn participation increased. This matters for every type of business, B2B, B2C, not-for-profit and solopreneurs. UMass Dartmouth research focused on the Inc 500 revealed that LinkedIn was the top social media platform.

Facebook was the only major social network where active usage dropped in 2014. Active Facebook usage declined 9% consistently across regions and age groups.  (To help your marketing, here’s how to deal with reduced Facebook visibility.) 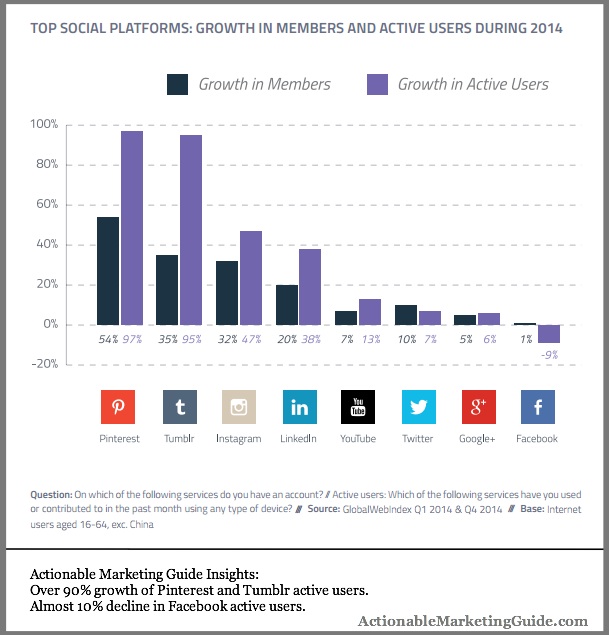 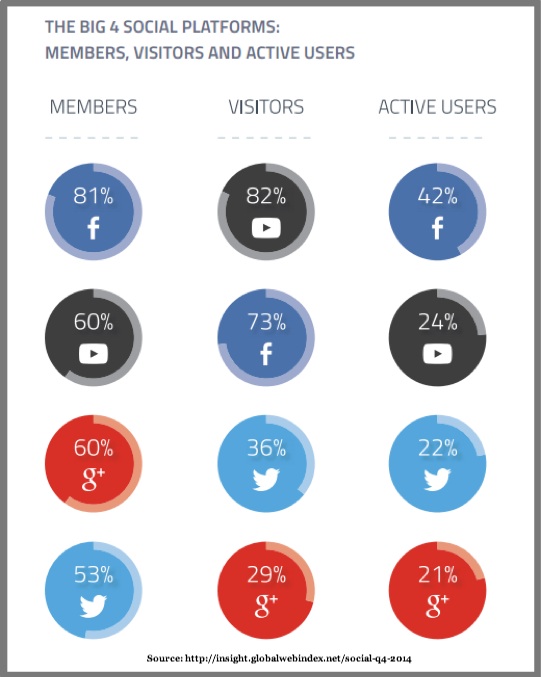 No one social media network “owns” your audience’s attention anymore.

To truly understand your key audiences, you must look deeper to appreciate how and why they use each platform. 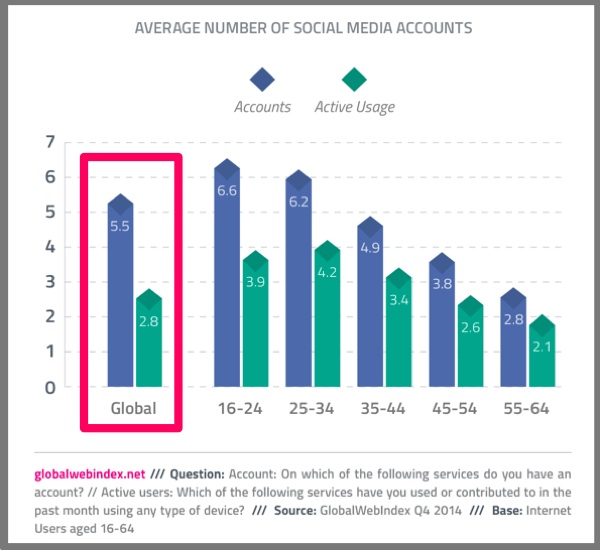 Multiple social media network usage is one reason total time spent on social media platforms increased from an average of 1.61 hours per day in 2012 to 1.72 in 2014.

Social media participants use apps to quickly find and easily dive into their experience.

Apps translate to mobile devices, mainly smartphones and tablets. This implies social media usage is a time filler, on-the-go activity, and/or dual device usage. This transition reveals where the action is and your audience’s focus is. 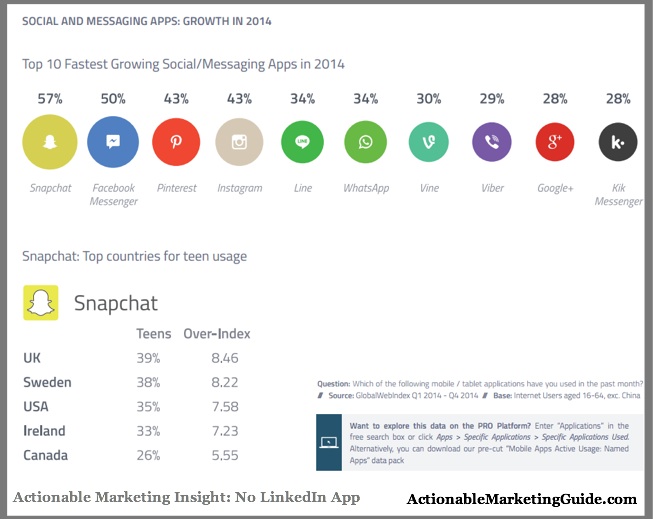 No surprise, SnapChat continues to over index for teens.

To really understand your target audience and their use of social media, you must look at their age and related use.

Social media behavior and motivation for use varies by age.

Facebook is the second-oldest social media network in terms of active user age and experienced the smallest decrease in active usage among their oldest users. (Note: This is consistent with the Pew Research.) 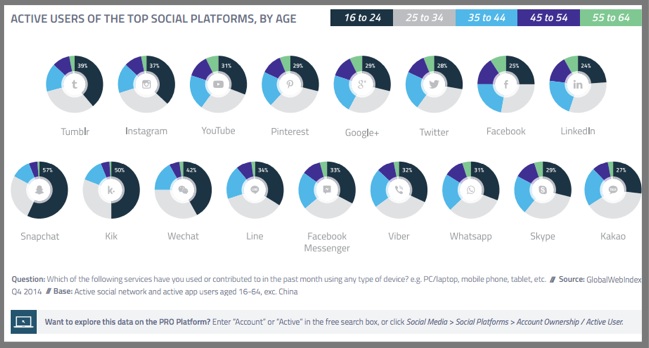 Social media behavior in 2015 is defined by a number of different attributes.

As a result, marketers must create and update their social media persona for each of their key audiences and assess where, when and how they engage on social networks.

What do you view as the most important social media behavior in 2015 and why do you think so?

BTW, you may be interested in how to drive measurable social media results.

4 Responses to Do You Know What Your Audience Is Doing On Social Media?