Move Your Marketing Into the Mobile Future 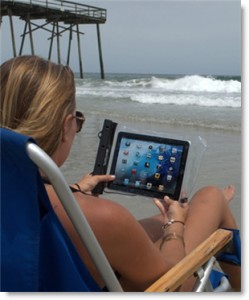 Mobile penetration for smartphones, tablets and other connected devices continues to expand, changing how both customers and marketers communicate and interact.

Our voracious appetite for new connected devices has changed how we consume content and these changes require marketers to adapt their communications in order to reach their target audiences.

To help you mobilize your business to support your objectives, here are 53 new mobile marketing facts taken from twenty-three research charts organized by category.

Smartphone ownership continues to grow at almost 30% annual rate and now accounts for more than seven out of ten new mobile phones. 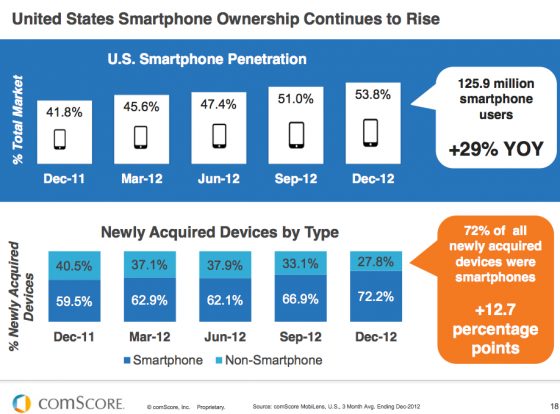 When it comes to purchasing, network quality trumps other factors. But the reality is that these factors are similar for smartphones and feature phones. 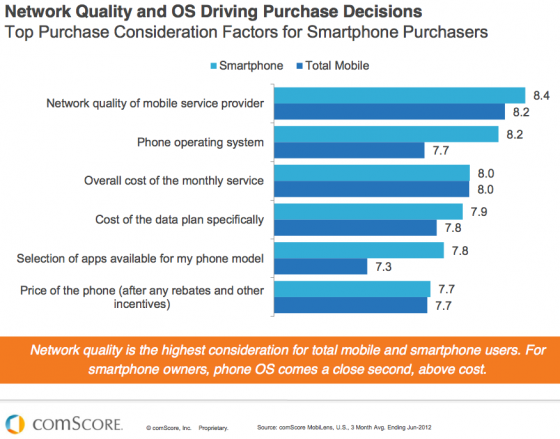 It’s interesting to note that Android ownership (53.4%) has passed iOS (36.3%). Together, these two platforms account for about 90% of US smartphones.

Samsung dominates the Android phone market in the US. 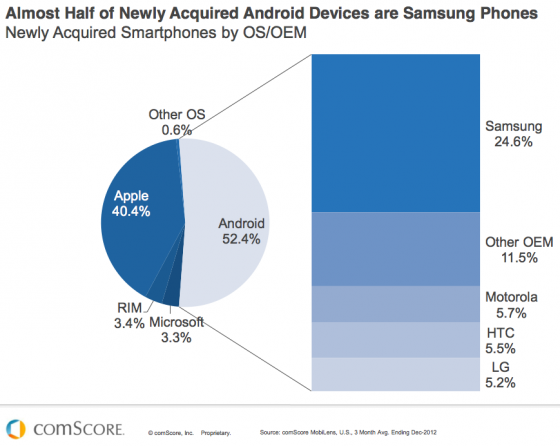 iPhone users are older and more affluent. This makes sense since Apple products are more expensive. 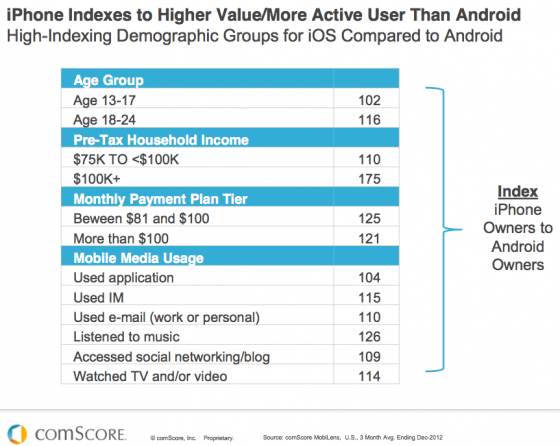 Tablets continue to gain traction among consumers in today’s multi-platform landscape. In the US their adoption has a higher rate of growth. It’s significantly faster than that of smartphones. 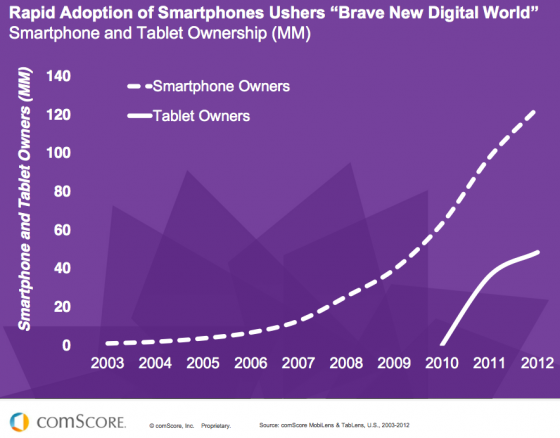 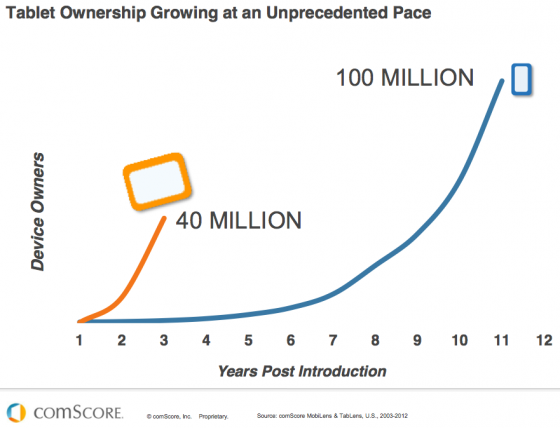 This multi-screen use means marketers must ensure that their websites and other forms of content are able to be read on different screens. This means using responsive design. Don’t assume that your audience will be willing to put up with content that’s difficult to view or navigate.

Mobile devices account for over 13% of web traffic, specifically 8% comes from smartphones and 5% comes from tablets. More than one in three minutes is spent on a mobile device. 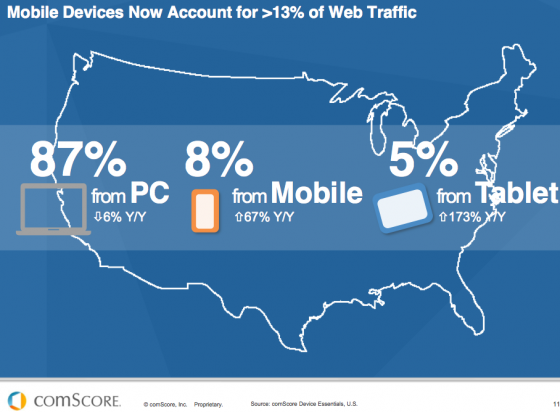 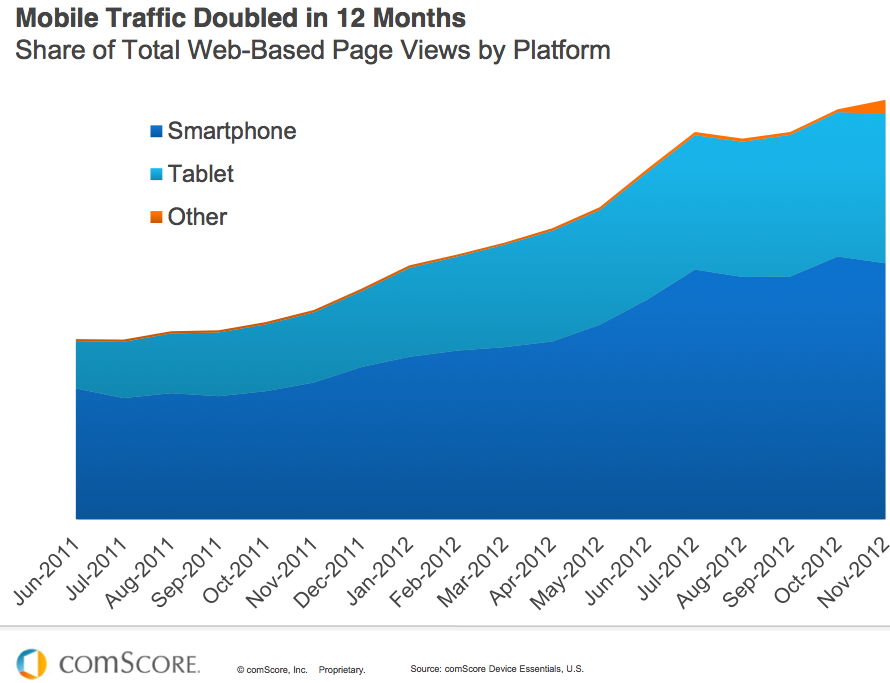 Mobile applications (aka apps) represent four out of every five minutes spent on smartphones and mobile web usage accounts for the remaining one out of five minutes. Facebook tops the smartphone app list with about three quarters of the market or 85.6 million unique visits in December, 2012, according to comScore. Facebook also tops the charts in terms of smartphone engagement with over one-fifth of all time spent on mobile apps in December, 2012.

Among US subscribers, Google apps follow Facebook with its Google Maps, Google Play, Google Search, Gmail and YouTube apps. Together, these Google apps represent about 10% percent of all time spent on apps in December, 2012. 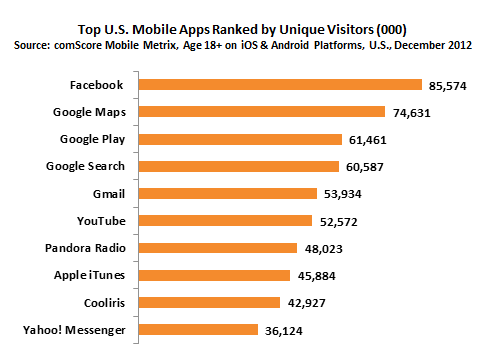 For smartphone and tablet users, the top three kinds of video content were movies, user-generated content, and TV shows, according to research by the Rovi Corporation. Mobile phone viewers tended to watch shorter, user-generated content (such as YouTube) which is more of a content snacking activity and tablet viewers tended to view longer format, professionally created video such as feature-length movies and TV shows. Unfortunately, the research didn’t ask whether these differences were attributable to the users’ data plan and location during use since streaming can be a data heavy process. Marketers should consider these differences when creating video content and placing advertising. 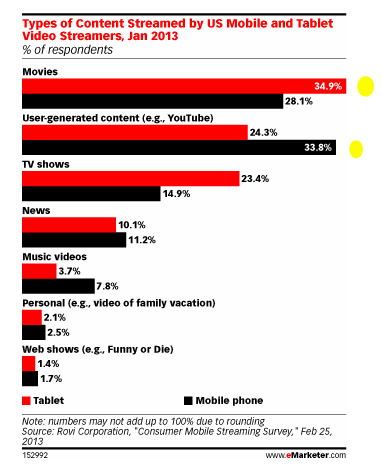 With the market growth of the smartphone and other devices, marketers are following users to the mobile screen. This caused the US mobile advertising market to grow to $4.11 billion in 2012 and is expected to increase to $7.29 billion in 2013 according to eMarketer’s forecast. In part this exponential mobile advertising growth is attributable to the entrance of both Facebook and Twitter into the marketplace.

In the mobile display market, Facebook accounted for 9.5% of mobile ad revenues in 2012 and is projected to grow to 13.2% in 2013. It’s expected to account for three out of every ten mobile advertising dollars in 2013. In part, this growth is attributable to Facebook’s native ad formats that are seamlessly integrated within the core user experiences. As a result, it delivers mobile ad impressions at higher volumes than traditional publishers helping them capture market share more quickly. (Note: Twitter also benefits from the use of native advertising. 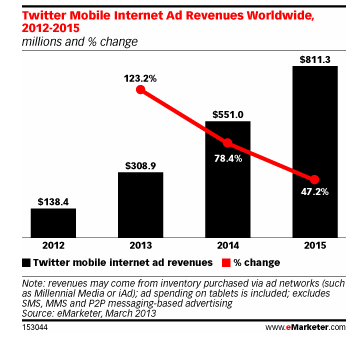 By 2017, US advertisers will spend $27.13 billion on mobile display, search and messaging-based formats, served to all mobile devices, based on eMarketer’s estimates. That translates to about 45% of all digital ad spending and 13.8% of total media ad spending that year. 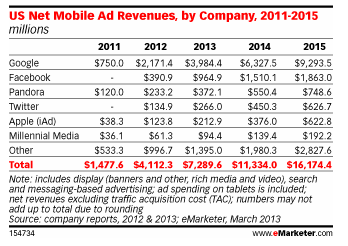 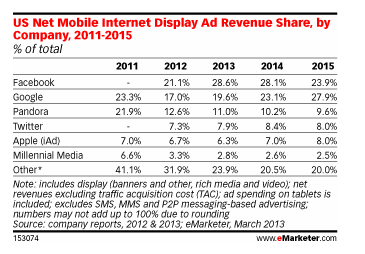 Google owns the mobile search market with 93.3% of US net mobile search ad dollars. Further, over half of total US mobile ad revenues will go to Google in 2013 and its share will grow by nearly 3 percentage points by 2015. 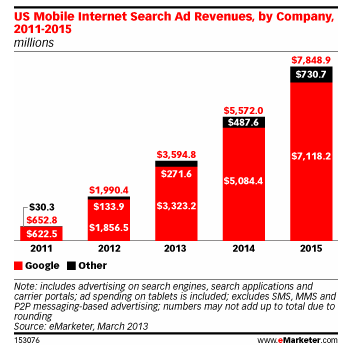 Mobile devices, both smartphones and tablets, have started to take market share away from ecommerce. According to comScore, mobile commerce accounted for 11% of ecommerce in 2012. It’s noteworthy that this activity isn’t just showrooming, where consumers check out products at retail and later purchase them online. It also includes purchasing.

WiFi availability has an impact on shoppers who have a mobile device. According to a 4Q2012 report by JiWire, more than 90% of smartphone owners used their device at a bricks and mortar retail location. From a marketer’s perspective, this activity can be both an opportunity to better provide information prospects need and a threat where your competitors can still lure your prospect to their offering. To stay competitive you need to offer price comparisons, discounts and deals and product reviews. 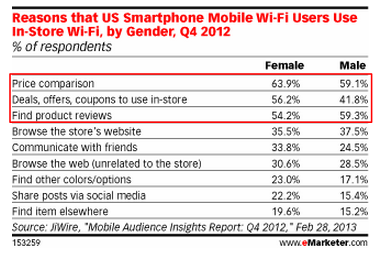 Affluent shoppers have significantly increased their mobile shopping to almost two out of five shoppers in 2012, according to Unity Marketing. Further, the number of affluent shoppers using some form of mobile product research more than doubled to 51%. Not surprisingly, about half of the younger segment of this market had shopped or purchased via a mobile device. 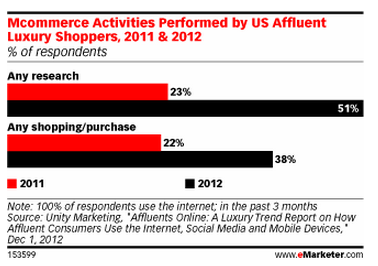 Given this significant increase in luxury mobile shopping, marketers are preparing to engage high-income targets with mobile content. According to an analysis by L2 Think Tank, 70% of 100 select luxury brands had at least one iOS mobile app in January 2013 while the number of apps expanded from 196 to 238. Concurrently there was increased use of Android apps to 37% of luxury marketers with 65 Android app offerings. 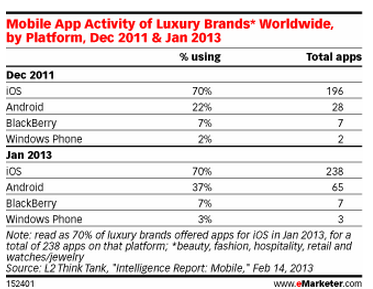 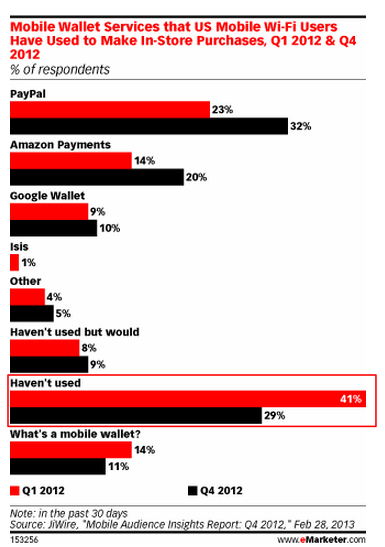 Marketers must ensure that their content and messages are accessible across a variety of devices. Further, they need to be integrated into the different mobile experiences with the understanding of what consumers are doing at the time.

What’s your experience with mobile marketing been? What important lessons have you learned?