Ignore Google+ At Your Risk [8 Social Media Charts You Must See!]

Google+: Is Your Brand Left Behind? 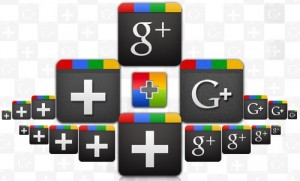 Google+ clocked in at number eight on Nielsen’s 2011 Top 10 US Social Media and Blogs list. At the time, it was roughly one seventeenth the size of top ranked Facebook in terms of average monthly unique visitors. 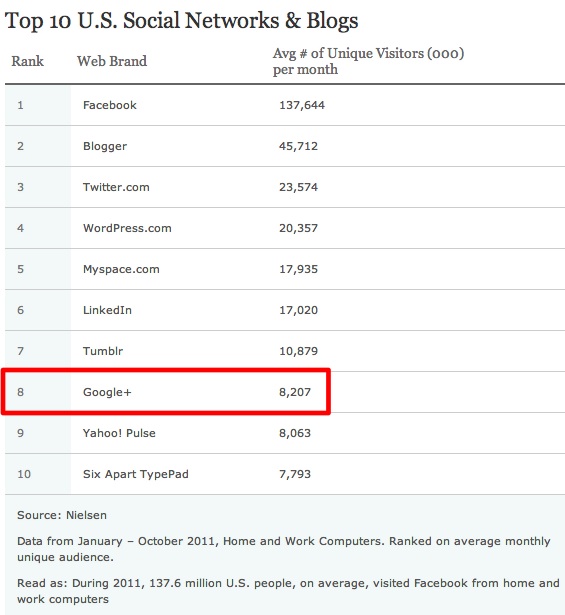 Google+ has increased by roughly a factor of six to 33.2 million unique users as of July 2012, according to Compete. (Note: This is less than the results Google reports.)

Google+ gets mobile. Its app is preinstalled in the 900,000 Android devices activated every day based on a tweet by Google’s Andy Rubin on June 10, 2012. Further Google’s Vic Gundotra confirmed that more users sign into Google+ with the mobile app than visit its desktop site.  For marketers, this translates to critical placement on the “always on” smartphone device. Further, its parent, Google, recently acquired Zagats and Frommers positioning it as a competitor to Yelp, TripAdvisor and Foursquare.

Google+ tops the list of social media sites (along with Wikipedia) in terms of customer satisfaction with a score of 78 according to The American Customer Satisfaction Index (ACSI) It was significantly ahead of Facebook. Google+’s high rating is attributable to the absence of advertising and its superior mobile offering. 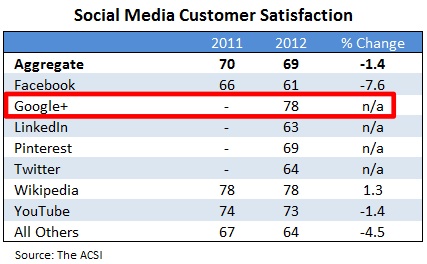 Two thirds of the Interbrand Top 100 have a Google+ brand page, a number that’s been relatively stable since the option was introduced in November 2011. Of these, two fifths of the brands update their Google+ page at least three times a week. (As a point of comparison, this is the frequency a blog needs to attract most of its readership.) To be consistent in terms of new content, marketers must update their Google+ pages at least three times a week as part of your social media marketing calendar. 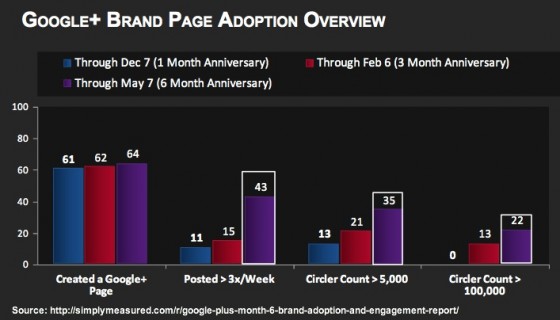 One third of the Interbrand 100 have a circler count of at least 5,000, setting this as a minimum level of Google+ hand raisers. Further, one out of five of these top brands has over 100,000 circler counts.

While total brand circlers have increased steadily, the gap between the brands with the most circlers and the other brands has widened. As a result, it’s getting difficult to catch up. From a marketing perspective, you must be on Google+ actively building your circler base for the future. 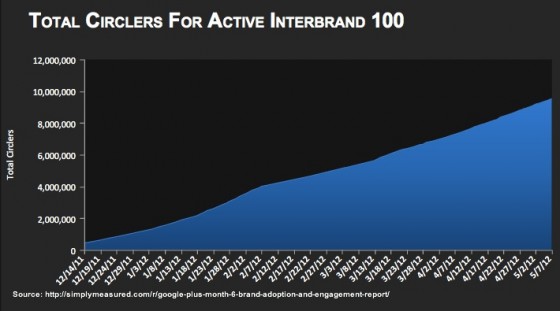 Google+’s top five industries based on the number of circlers are automotive, electronics, luxury brands, Internet service and beverages.  What’s interesting is the falloff in circlers after the top spot and after the fifth spot. From a competitive perspective, you need to consider your standing relative to the firms your consumers consider your competition.

The Top Ten Interbrands on Google+ are Ferrari, H&M, Gucci, Burberry, Starbucks Coffee, Ford Motor Company, Coca-Cola, Samsung USA, Pepsi and Google. Given the size of beverage budgets and use, it’s no surprise to see Starbucks, Coke and Pepsi on the list. What’s unusual is the representation and size of the luxury brands, namely, Ferrari and Gucci.

The Top Average Daily Circler Growth by Brand is dominated by luxury brands, specifically Armani, Ferrari, Gucci and Burberry. Note that Armani adds almost 5,000 circlers per day on average. By contrast, affordable treats like Starbucks and Coke have about 60% of that amount. For marketers, it’s important to develop a social media persona to understand where your target audience participates on social media. 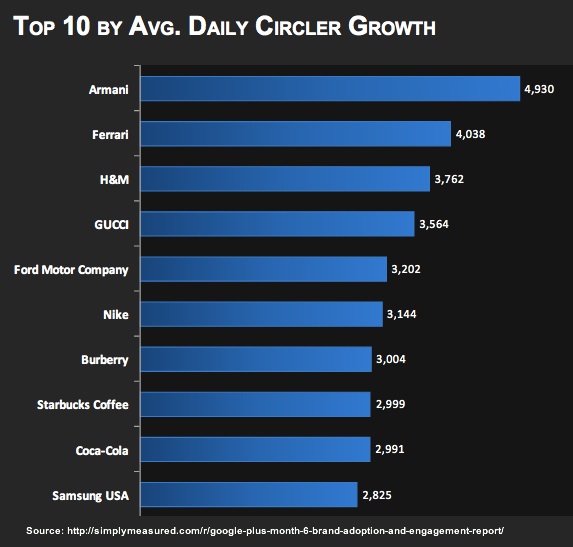 On average companies have 2.6 accounts on Google+ according to research by Burson-Marsteller. Here’s how Armani looks on Google+.

Take a lesson from Microsoft, Yahoo and others who’ve discovered the hard way that it’s difficult to compete with Google in the search arena. With social media signals increasingly being incorporated into search results, as a marketer, you need to have a presence on Google+. If that’s not enough to convince you, Google+ has high customer satisfaction and great mobile usability. Lastly, did we mention that it’s getting harder to build your Google+ presence relative to the largest brands?

What other insights have you learned based on your experience with Google+?

P.S. I’d be thrilled if you circled me on Google+

11 Responses to Ignore Google+ At Your Risk [8 Social Media Charts You Must See!]