Global Social Media Trends – What You Need To Know

Posted on March 4, 2014 by Heidi Cohen in Social Media | Comments Off on Global Social Media Trends – What You Need To Know 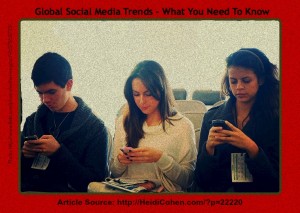 Social media usage continues to expand across the globe and different platforms based on the Global Web Index‘s Social Media Report. 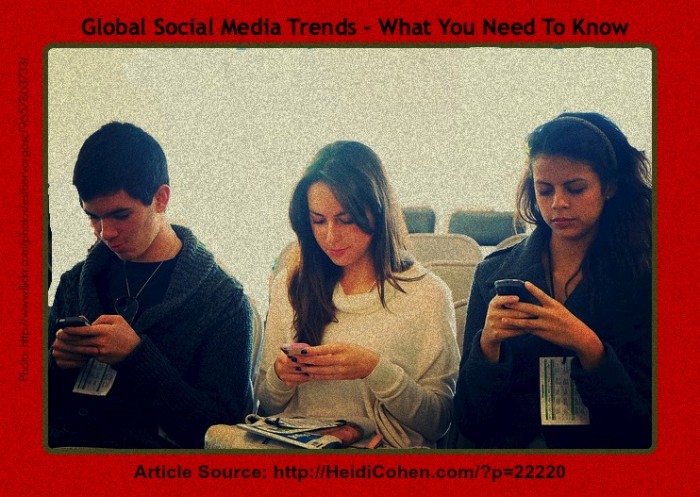 1. Facebook continues to reign as the top social network globally as its 4Q 2014 financials showed. This is similar to Pew Internet’s US findings. 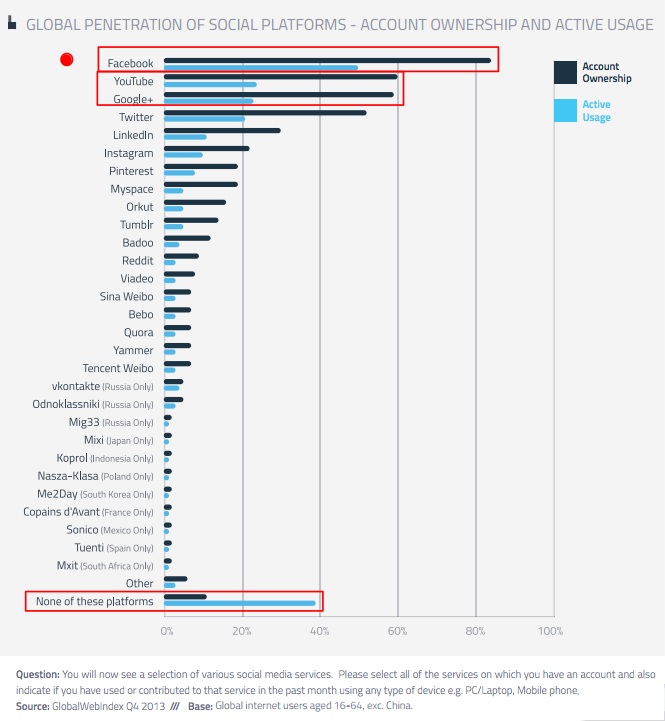 This makes sense in light since 60% of images were taken and shared outside of the US. Don’t forget that Instagram is part of Facebook. Here are the  top Instagrammed cities in 2013; they represent a global mix. 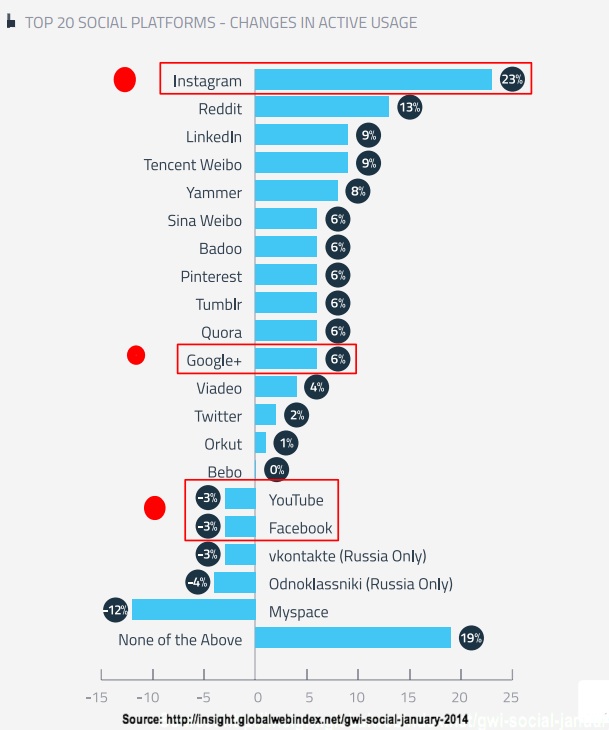 Emerging Internet markets outpace established markets in terms of global social media use. Across most social media platforms, users from the Middle East and Africa tend to be high level participants.

4. Facebook has the highest usage across global regions and ranks highest for North American users with 55% usage.

6. Pinterest is effectively only in North America with 16% usage there. Given the focus on scrapbooking, interior design, clothes and food, these may be more consumer-oriented than in other cultures. 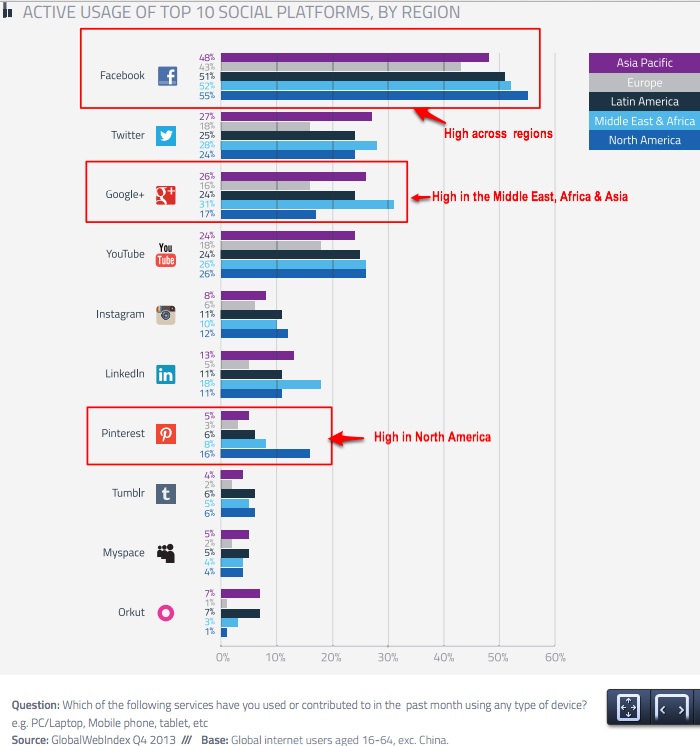 Mobile is where the social media action is. Social media is made for on-the-go snacking behavior. It also underscores the mobile first or mobile only activity. 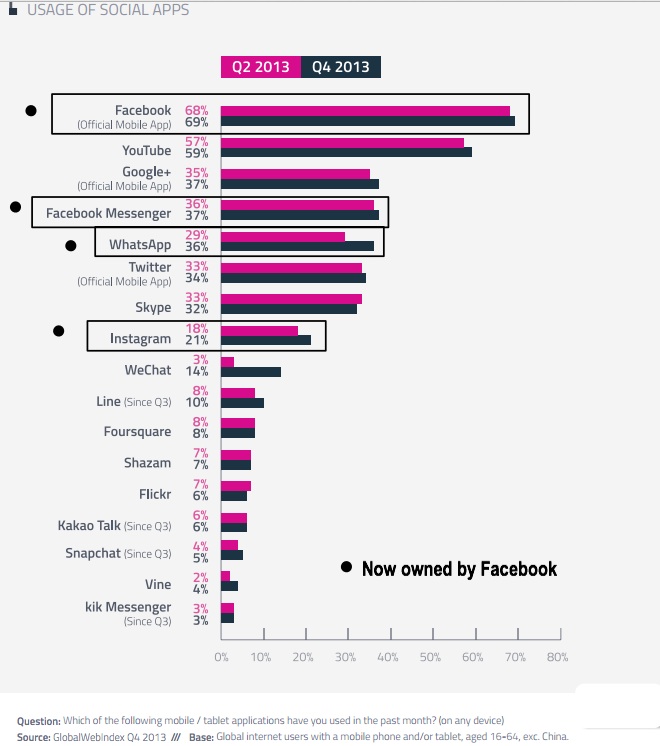 Age has an impact on global social media trends

Social media usage remains strong among the group that first started using these networks while in college.

9. Facebook’s biggest demographic age segment is 25 to 34 year olds. This shift is consistent with other data from early 2013 that showed a falloff in teen Facebook usage. Facebook was silent on this point when they discussed their 4Q 2013 results. Don’t look for the cool kids on Facebook.  39% of Instagram users are teens. This demographic loves to share photos. This purchase was and is strategically important to Facebook.

10. Tumblr continues to be popular with teens who account for 45% of its base. Since being purchased by Yahoo, little has been heard from this platform. 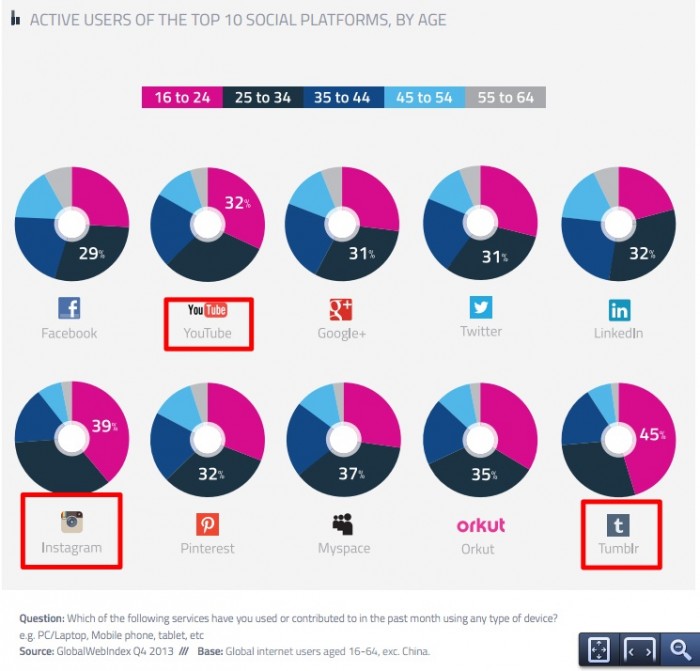 Globally social media continues to be attractive to audiences. While Facebook still dominates, it’s lost the strength of the teen demographic except through its mobile purchases, namely WhatsApp and Instagram.

Bear in mind that the heart of social media activity has migrated to mobile. Therefore your social media marketing must render well on smartphones and tablets.

What’s your experience been? Have you seen similar shifts in your audience’s social media usage?