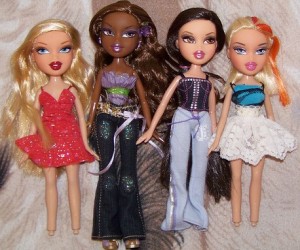 Girls will be girls regardless of the playground or communications toys they’re using. From a marketing perspective, it’s important to understand that women leverage social media, particularly Facebook, as an extension of what they do elsewhere.

For marketing insights into how women use Facebook, let’s look at two different women with whom I have real life relationships. While these two women have divergent Facebook footprints, both have two children and neither lives in a major city.

Women appreciate Facebook for providing another way to stay connected with their friends based on Eversave’s survey of 400 women. Facebook helps them to effectively keep their friends informed about their lives (79%) and share interesting and/or funny links and videos (64%). Further, Facebook allows women to expand their experience of keeping in touch by seeing friends’ photos and videos (91%) and searching for long lost friends (76%).

About 84% of those women interviewed were annoyed at one time or another by one of their Facebook friends. As a woman, this doesn’t strike me as unusual since at some point, you’re going to get annoyed by a friend over something. Given that social media allows for asynchronous many-to-many communications, there’s a strong possibility that a message may be misconstrued or misinterpreted, especially if you factor into the equation the use of unusual abbreviations or shorthand by one or more of the participants.

Here’s Eversave’s infographic of how women categorized their Facebook friends. Click the image for a larger version: 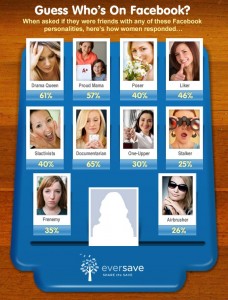 As a marketer, understand that women use Facebook to interact and keep up with their friends. For many, it’s an extension of their real-life relationships and they have real-life reactions to these exchanges. Since Facebook reflects these real-life interactions, marketers should tread carefully to avoid being seen as uninvited guests at a party. To this end, it’s critical to provide value to your Facebook friends and fans.

How do you feel about these Facebook research findings? Based on this data, what would you recommend to marketers? Please share your perspective in the comment section below.

Tip of my Hat to Margie Clayman since this post is part of her series on Women and Social Media.

7 Responses to On Facebook Women Just Want to Socialize