The Biggest Social Media #FAILs of 2013 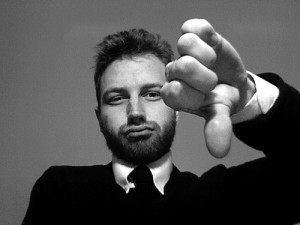 Given the widespread social media use and engagement, it’s surprising that businesses continue to make the same egregious faux paux that gets them into trouble with their customers and the public.

This means marketers have a hole in their social media strategy.

Here are 5 proactive tips to help avoid the social media #FAIL spotlight. Understand that this isn’t insurance that you won’t have a problem but it will minimize your chances of having one and limit its impact. 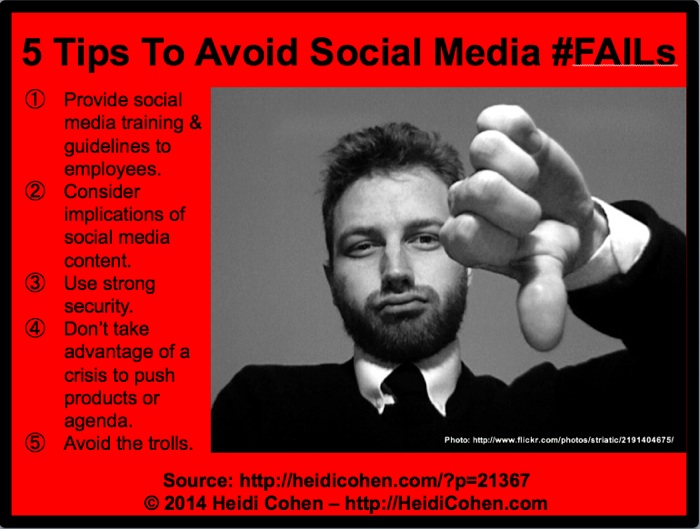 The biggest social media #FAILs of 2013

The biggest social media fail was without question the use of robotic, repetitive, pre-written or pre-scheduled tweets and or posts. In fact, considering it was 2013 – hardly a time of ‘social media in its infancy’ – I am dumbfounded as to why companies continue to use such soulless methods of communicating with their communities. From the Home Depot’s racist “different drummer” tweet and resulting robotic auto-apology, to Bank of America’s never ending “we’d be happy to review your account with you…” to British grocery chain Tesco, their unfortunate horse meat debacle, and forgotten prescheduled auto-tweet about “being tired and hitting the hay!” — brands have illustrated time and again how painful this type of automation is, and how soulless it appears to the consumer.

The ones that were most outstanding to me were due to either a lack of a social media strategy or security problems. (We need to take note that these need to be priorities!)

Lack of metrics.  Hype still abounds.  Social media and content marketing are great tools but they only work if they are used effectively.  Marketers are still tossing too much money at things without understand what makes them work.

Wow, we have so many to choose from this year. The one that got me worked up the most was the SpaghettiOs post about Pearl Harbor. How could they not know this was a terrible idea, putting a smiling brand mascot in the midst of a terribly tragic global event? At the time, it was the kind of thing that made me want to lobby for a law to ban every marketer from posting anything to social media ever again. It just makes everyone look bad. Since it came from a branded account, it was particularly horrendous – even more than the recent shamefully stupid and racist post by IAC’s PR flack about AIDS in Africa.

Public relations industry still isn’t embracing social media to gain its full publicity potential. There is so much room for the public relations industry to naturally help produce quality content and storytelling by embracing and empowering the concept of “Brands becoming publishers”. The company online newsroom is one example of how PR can add incredible fuel to content marketing.

JP Morgan decided to do a live Q&A session on Twitter with their Vice Chairman Jimmy Lee using the hashtag #AskJPM.  The hashtag was pelted with abuse prior to the Q&A session going live and the event was cancelled.

I love that the community decides what’s acceptable on social media and even big brands that are cash rich need to follow the rules.

The biggest social media #fail of 2013 was the fact that there still are social media #fails. At least in the US, social media is broadly used across various demographic, psychographic and geographic segments so that marketers and businesses should understand the implications of the content they share on these forums.

While there’s always the chance that a planned social media campaign can go wrong, taking the time to vet it and get feedback can minimize potential problems as can good social media training and guidelines.

It was pretty low class when Epicurious tried to use the Boston bombings to push scones.  (Thanks Sean D Francis for reminding me of this one)

#AskJPM.  They were asking for it.

10. Ric Dragon of Dragon Search and author of Social Marketology.

There were quite a few to choose from! Amy’s Bakery, of course, was absolutely epic.  To such a degree it feels like cheating to cite it as an example.

I think the biggest social media #fail of 2013 has been the recent uproar about Facebook’s reach decline. This is a fail for several reasons. Marketers shouldn’t rely on Facebook to be their primary source for content distribution. Content distribution should be spread across your website, blog, emailings, Twitter, Pinterest, Instagram (if your content is mainly visual), Google+ and LinkedIn. This is the only way to avoid worrying about Google or Facebook algorithm changes. If a platform’s change in algorithm has a big impact on your business, it probably means that your content distribution isn’t as diverse as it should be.

I think the biggest Fails were in brands not going far enough. Staying in their own heads and not looking at the world from their customer’s point of view, with honest empathy. That resulted in content that was silly (like this from Nestle.) or simply boring.

There was a lot of talk around brands and bloopers in 2013 but one of the greatest fails this year was human and on the side of community: the mobbing that took place around the Jessica Sacco fiasco.

Yes, the tweet was insensitive and in poor taste but the anticipation (and dare I say joy!) in seeing someone crash and burn was downright scary.

Behind (almost) every avatar there’s a real person. It’s okay to disagree and be disappointed, but we can remain human and respectful while doing so.

How many social campaigns did you see that made you smile but you can’t remember or didn’t notice the brands? This includes:

“Rewarding the customer” is a justification I frequently hear people make for a campaign or promotion that didn’t work. Too many marketing folk pander to their egos.

15. Arnie Kuenn of Vertical Measures and author of Accelerate.

Well sneaking it in just as 2013 was coming to a close, I have to go with Justine Sacco and her racist, insensitive Tweet. The reason I picked this event, as the biggest fail (and not some corporate fail), is the whole story around it. She just happened to be a PR person for IAC (Barry Diller’s company), who sent the tweet from her personal Twitter account just before boarding a 12-hour flight to South Africa, had no idea the uproar she created until landing, and she was fired while in the air — it just adds up to an amazing story and social fail.  People who know her say she is a decent person that just did not understand the social platform she was using. But let that be a lesson to everyone, you live with the repercussions from everything you do online. In case you care, she did issue an apology.

Justine Sacco’s, the former director of communications at the PR firm IAC, tweet: “Going to Africa. Hope I don’t get AIDS. Just kidding. I’m white.” It disproved the adage, “There’s no such thing as bad publicity.”

Epicurious’ Boston Bombing Twitter #fail. In response to the Boston Marathon bombings Epicurious posted a series of Tweets suggesting recipes to those that were part of the marathon. It came off as insensitive and inappropriate and there was a huge outcry on Twitter. 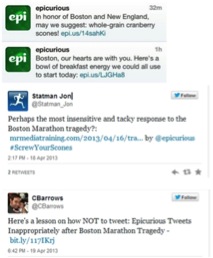 The result was a global social media firestorm, immediate trending topic on Twitter and her firing by the company. The viral tweet was so repugnant and poor character for a media executive. She apologized; however, being sorry could not repair the damage to Sacco’s credibility, reputation, and long-term success.

This incident hit home from the perspective of my profession. Anyone working in public relations knows how critical it is to uphold the ethics of the profession, and to act in accordance with company and client standards.

It’s interesting that about half of the experts pointed to a hand full of serious social media #FAILs while the other half underscored the shortcomings of marketing and PR to leverage the power of social media effectively.

What do you think were the biggest social media #FAILs of 2013 and why?