21st Century Leadership: What I Learned On the Playground

13 Personality Types You Met in School 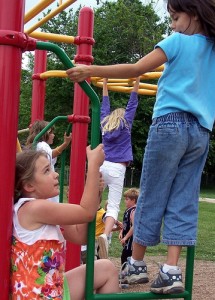 When we think about twenty-first century business leadership, remember that we learned how to interact within an organization back in elementary school where there was an established hierarchy consisting of principal, teachers and students. As we get older and take on business roles, we often fall back on behaviors we learned as children. Leadership is one area where these prototypes are prominent and come to the fore. One of the reasons we can cope with our management team is that we knew people just like them back in the schoolyard.

To understand today’s business leaders, here are thirteen prototypes of children that appeared on playgrounds across the United States. Although they may have had different names, we all recognize them and remember them as if we just got home for milk and cookies.

In our simplified view of the world when we were younger, we tended to focus on one attribute or characteristic of each of our schoolmates. As we matured, we became more well-rounded individuals and found that the people we know have a broader, more developed array of traits, some of which may be inconsistent. Therefore, in terms of leadership, the important challenge is to position ourselves with respect to others in order to accomplish our goals.

While we may have been assigned one of these roles to play as a child, it doesn’t mean that we still have to be that person as an adult. Therefore it’s incumbent upon us to examine the roles that we’ve been assigned and determine where we want to go. Then take the scary step towards changing how we see the world and how others see us in order to manage others. Leadership requires that we take control of our own destiny before we light the way for others.

Do you see any of these playground types on your management team? If so, how do you deal with them based on what you learned in school?

Note: This blog post was part of the #UsBlogs. An exercise by the members of UsGuys on a set topic of the week. This week’s topic was Leadership. Further, Lisa Petrilli who runs the LeadershipChat gets a hat tip as well.

6 Responses to 21st Century Leadership: What I Learned On the Playground