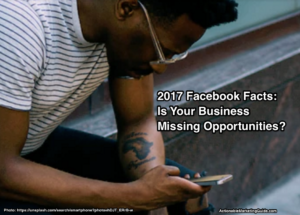 Despite Mark Zuckerberg’s protests, 2017 Facebook is more than a social media platform.

As we enter 2017, Facebook is a full-fledged media entity. (BTW, this trend isn’t limited to Facebook. Here’s a full explanation of social media is media.)

Facebook is a media titan in the traditional sense of the word. It has an audience that consistently spends time with content delivered on a regular basis to yield advertising revenues.

Regardless of business size or focus, Facebook is a necessary element of your marketing plans.

To stay current and maximize your marketing results, you must know the following 2017 Facebook Facts. 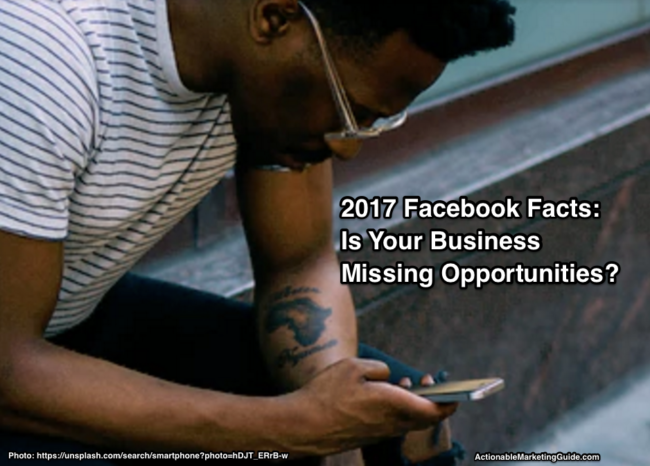 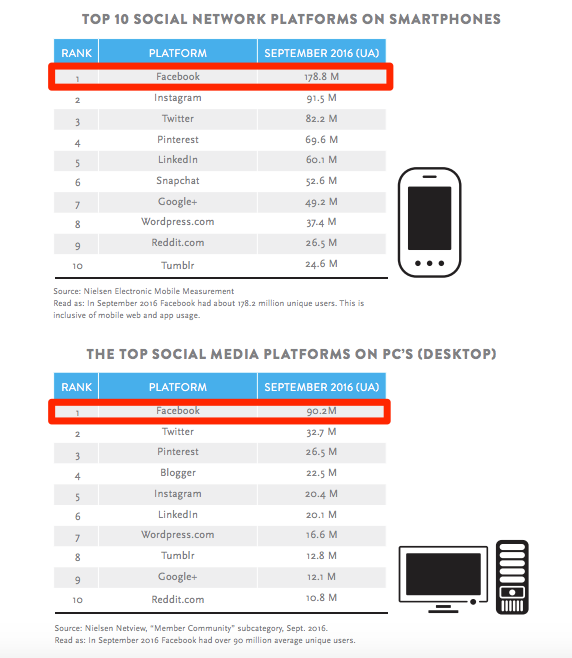 How the social media sites rank according to Nielson by device 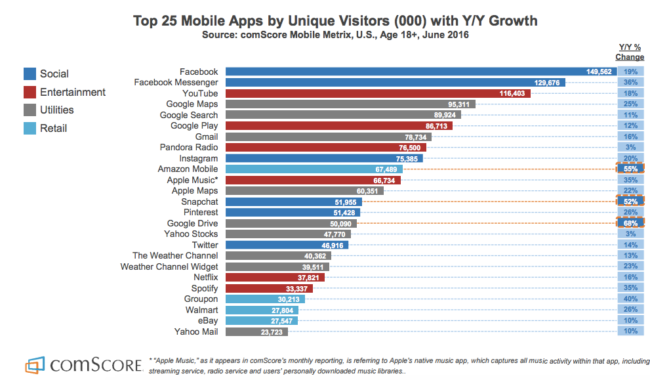 Facebook instills friends and colleagues with FOMO (aka: Fear of Missing Out). Consider how your business can engage your targeted audience to share their best moments with their friends and connections.

The average Facebook user has 155 connections of which 28% are genuine friends. In an emergency, a user would trust a mere 4 of those people according to the Telegraph. These numbers are close to the Dunbar number. 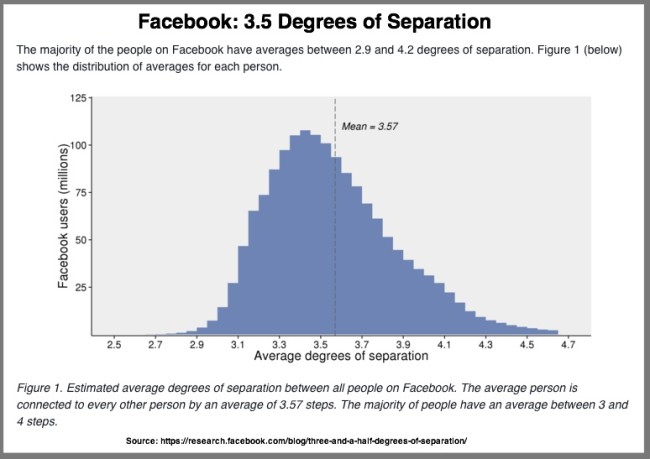 BUT beware: 83 Million Facebook profiles are fake. While there may be valid reasons for this, they’re still phony Facebook accounts.

From a marketing perspective determine if your community contains fake users. If so, what are they doing and what are they costing you?

On average, we spend 50+ minutes per day on Facebook’s various apps (excluding WhatsApp) according to 1Q2016 earnings report. To put that into context, that’s almost an hour a day. YIKES!!!

On average, we spend 50+ minutes per day on Facebook’s various apps

To put that in context, we spend roughly one hour per day on Facebook. That’s about 8% of our waking hours.

As a marketer, you’ve got an opportunity to reach your followers and others by posting content on Facebook.

When posting on Facebook, you must consider your objectives. Do you want shares, clicks or engagement? Use these factors to guide your Facebook posting schedule. According to Co-Schedule’s analysis of 16 sources, the best time to post for Facebook engagement is: 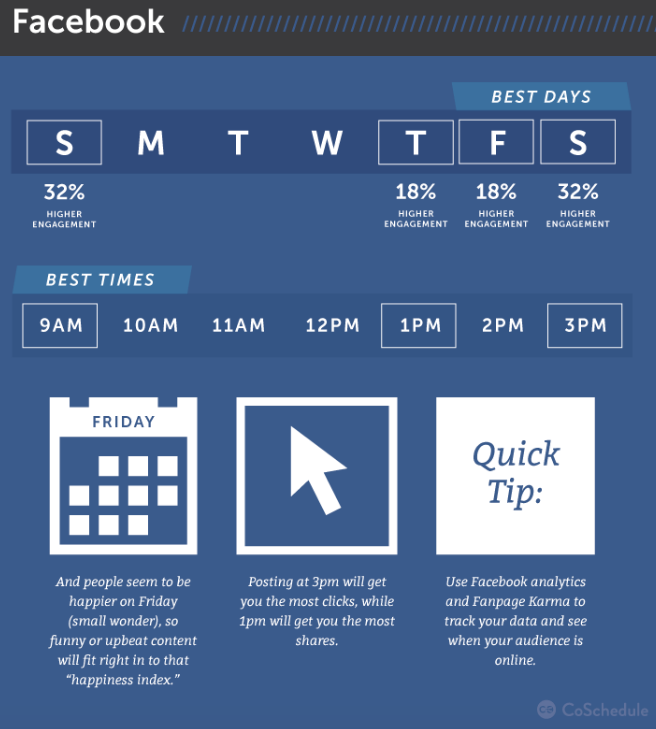 BTW, Check out The Social Media Hat’s Mike Alton‘s guide to help you repost other people’s content on Facebook.

Facebook took a lot of heat after the US election for not ferreting out fake news. Other user-generated content sites such as Yelp are criticized for a lack of integrity (aka: gaming the system) and lack of editorial oversight.

While Zuckerberg wants to keep his algorithms, Facebook needs human editors. At a minimum, Facebook must respond to the public concerns as well as those of its users. 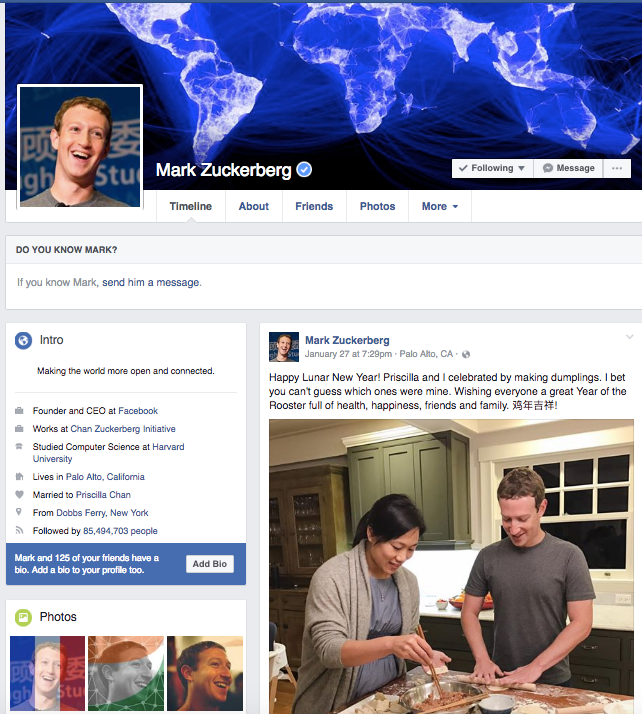 Huffington Post has shown that a media entity can offer a combination of traditional journalism, curation and user-generated content.

From a competitive perspective Facebook will need editorial oversight and original content to remain competitive. This will create a fine line for other media entities that leverage Facebook for audience amplification.

In the aftermath of the US election, traditional media entities are examining how their Facebook partnerships are doing. The big question is: What’s in it for me? (See Facebook advertising below.)

While video continues to be a key element of Facebook’s growth for marketers and users, Facebook must create quality content to remain competitive. This competition isn’t just Google’s YouTube. It’s also Amazon and NetFlix.

Facebook is examining video, specifically scripted shows, game shows and sports. Ricky Van Veen, the College Humor co-founder who joined Facebook in 2016, is leading these efforts. Some of these livestreaming deals exceed $1 million per year but these investments are significantly less than Amazon and NetFlix. 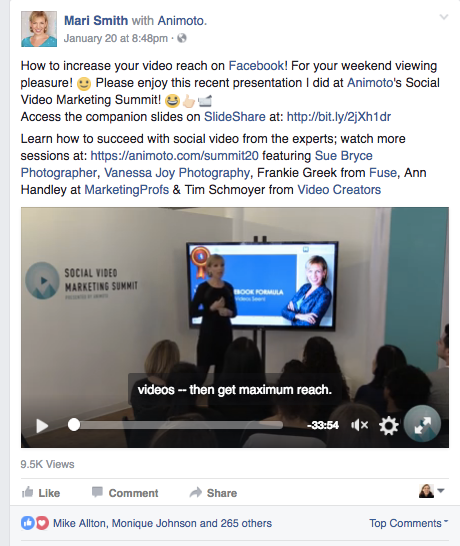 Google dominates the search realm. From an advertising basis, 2016 was the year that digital display advertising passed search advertising according to eMarketer forecasts.

From a competitive perspective, this is a major issue for Facebook that doesn’t produce any form of hardware, namely a smartphone like Apple or virtual assistant like Amazon’s Echo. Even Microsoft has Cortana.

While the Facebook app is installed on the majority of smartphones, they’re not part of voice search.

Google and Facebook together control 75-85% of digital advertising based on IAB and Deloitte research according to Jason Kint’s estimates.

updated duopoly #s. new IAB data came out yesterday. easy to run vs earnings for goog and fb, it's evident everyone else is zero sum game. pic.twitter.com/wolgdpfcxp

Facebook announced improvements to its advertising metrics to improve advertising relations in November 2016. While this is a step in the right direction, it means marketers must supplement Facebook metrics with other tools. 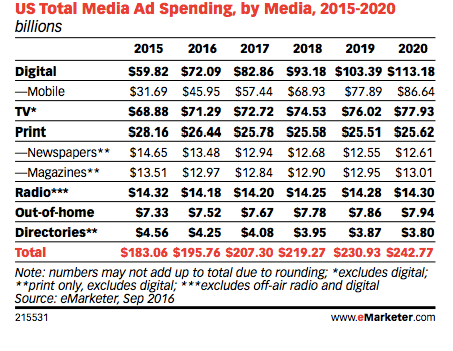 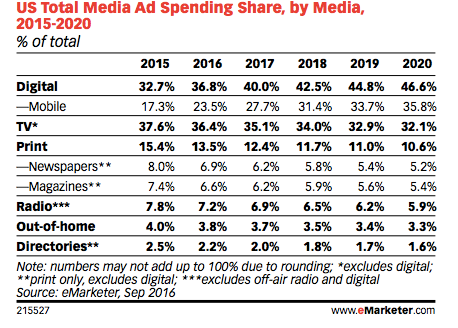 In 2Q2016 Facebook CFO David Wehner reported they were close to maxing out the optimal number of ads showed inside the newsfeed. Translation: Facebook needs to increase users and advertising effectiveness.

In 3Q2016, Facebook increased desktop advertising delivery by creating an ad blocking work around. While this is key, Facebook usage continues to shift from desktop to mobile.

Facebook could take a page from the television advertising playbook. They could put ads at the bottom of Facebook video. Yes it’s small space but if a user wants to see the video, they’ll let it take over their screen. Unlike pre-roll ads, it’s persistent while the user is viewing the video.

Additionally, Facebook could add sponsorships to Facebook emails. These messages lure users back to the platform see what connections are doing. It’s email that gets above average opens. 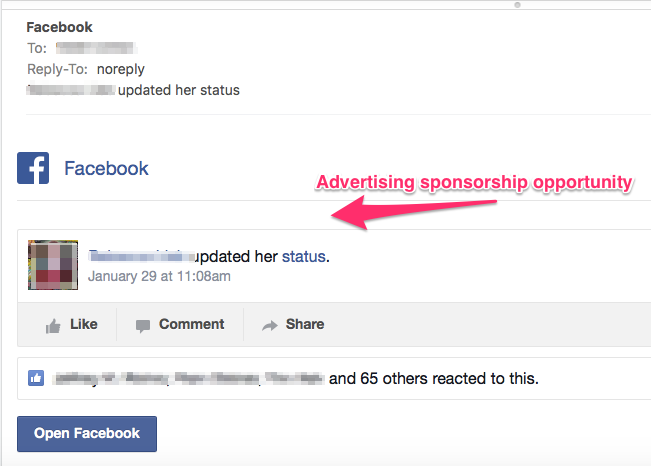 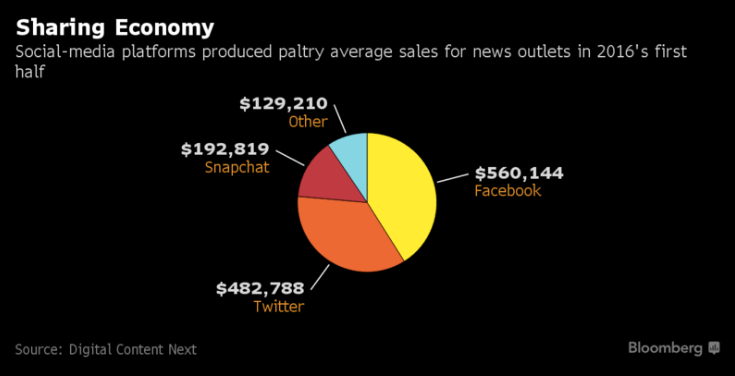 What does 2017 Facebook media distribution mean for your marketing?

Facebook’s revenue streams are focused on advertising. Fortunately, they continue to experience strong growth in users. Additionally, their investments in Instagram and WhatsApp continue to contribute to their bottom line.

But at some point, Facebook has to consider other methods for driving revenue diversification, most notably subscriptions and one-off-products to create predictable sales.

Of note is the fact that Facebook has one of the highest profit margins according to Bloomberg. Translation: Facebook can invest in other types of revenue generation while remaining profitable (although not necessarily at the same level.)

Love Facebook or hate it—your 2017 marketing needs to tap into the power of this media power house for community building and engagement, for paid advertising, and for content testing and distribution.

It’s a matter of sheer size.

Regardless of your audience’s needs or wants, the chances are they’re active on Facebook. Even more importantly, they’re connected to other people who may need your product. This helps your marketing with the influence of their friends and others.