Want to reach marketing decision makers on Twitter? Then check out Leadtail and NetBase’s analysis “How Digital Marketers Engage on Twitter” based on the Twitter activity of 515 North American brand, corporate, and agency digital marketers between between April 1st and June 30th, 2013.

Active social media users find ways to maximize content distribution. As a result, roughly four out five marketers tweet using the Twitter website or tweet buttons. The break out of apps is: 29% use Hootsuite, 20% use TweetDeck and 11% use Buffer. Further, there’s wide array of cross sharing at lower rates. 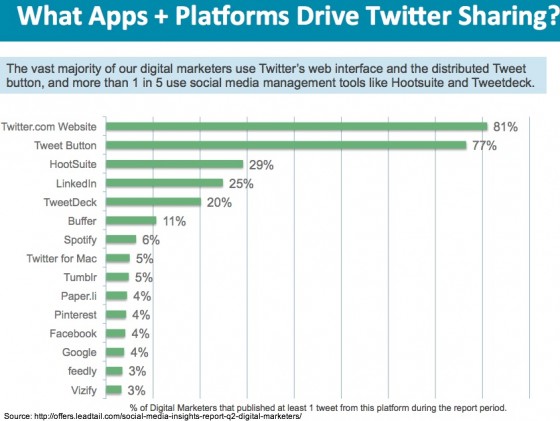 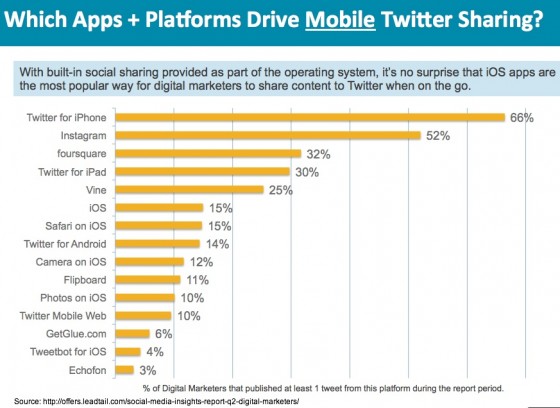 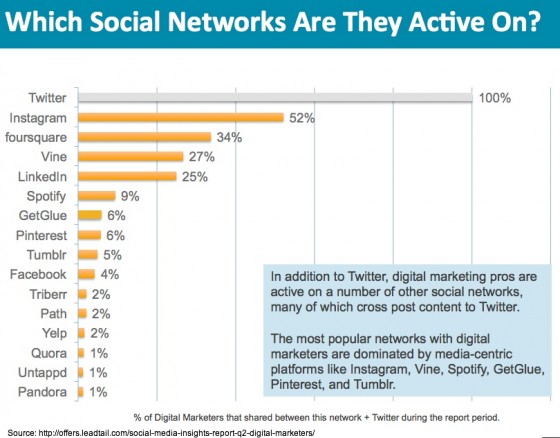 80% of the content shared on Twitter by marketers is media; 45% is mainstream media and 35% is industry specific media. 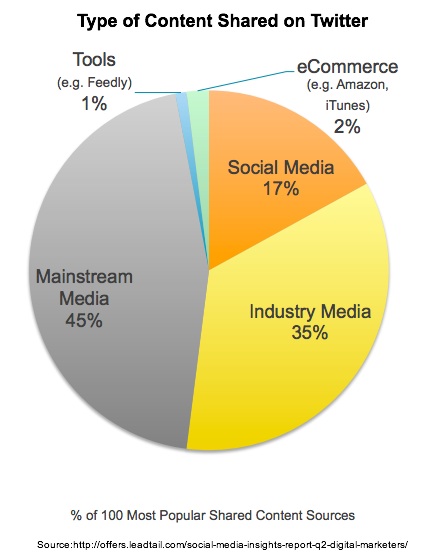 By contrast, only 2 of the industry sources have traditional media roots, Advertising Age and Ad Week.

The cross promotion of YouTube videos topping the list is interesting since YouTube is the second largest social media site and the second largest search engine. Also of note is the presence of SlideShare, which has fast become a B2B content staple. Since photos are easy-to-snap, share and consume, it makes sense that they account for a large portion of the options.

Like most social media participants, marketers mention others to give them credit for an idea or engage them in a conversation. Most of the people on this list are marketing thought leaders with Barack Obama and Hillary Clinton being notable exceptions. Jay Baer tops the list  since his new book  Youtility came out during this period and make the New York Times Bestseller list. (Note: Jay wrote his first book, The Now Revolution, with number 25 on the list Amber Naslund (aka @ambercadabra).  It makes sense that Twitter founder Jack Dorsey and CEO Dick Costolo are on the list. (BTW: Here’s how to get more Twitter followers.)

Using a mix of tools and devices marketers are highly engaged on Twitter. Due to Twitter’s short content allowance (140 characters), much of marketers’ conversation references other media sources, both mainstream and industry focused.

What other insights do you draw from this research?

P.S. Want to find out more about content marketing and get the tools you and your team need? Then join me at Content Marketing World September 9th through 12th in Cleveland, OH where there are over 60 sessions focused on helping you improve your content effectives.

But as my special guest you can sign up now for  Content Marketing World using my affiliate code SPEAKERGUEST  for a $100 discount on the standard registration price.