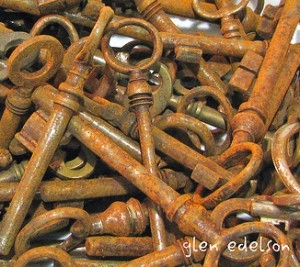 The 2013 highlights marked by the changes on social media, content marketing and mobile (or more broadly connected devices,) laid the groundwork for 2014 to be the year of context marketing. 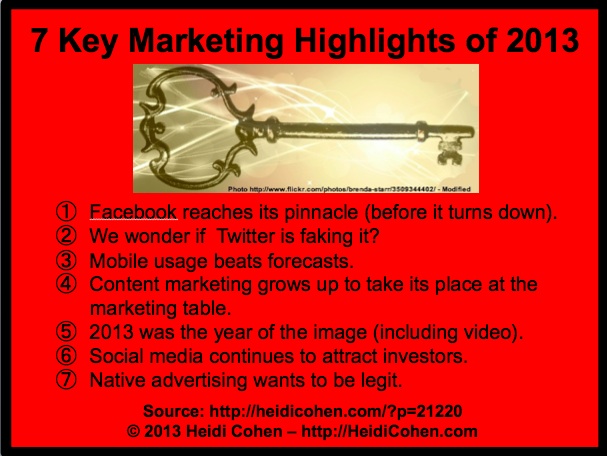 For Facebook, 2013 was the best of times and the worst of times. But more importantly, 2013 was the turning point that begs the question: Is Facebook the AOL of the twenty-teens?

Facebook’s stock price ended the year at its highest point since its IPO. This growth is largely based on its mobile advertising revenues. However, with half of their audience on mobile already and limited display space, Facebook’s ability to grow revenues is limited .

On the other side of the ledger, Facebook’s lost ground with its key demographic: teens. Many of them have been on the social media platform since they were in middle school. As a result, for them, Facebook is both kid stuff and old hat, a deadly combination for reaching this market that wants the new, new thing adults don’t know about. Yes, teens check Facebook but they do so for the same reason their parents and grandparents do—to keep up with what their friends and peers are doing.

Adding to Facebook’s challenges is that, while Instagram has provided competitive offerings to to match what Vine and Snapchat offer, these me-too products are still imitations – not new innovations.

If audience erosion and copycat products weren’t bad enough, on December 11, 2013, US District Judge Robert Sweet ruled that investors could pursue claims that Facebook should have disclosed, prior to its May, 2012 IPO, internal projections on how increased mobile usage would reduce future revenue. According to Reuters, Facebook COO Sheryl Sandberg is one of the 40 defendants in the suits.

Despite its successful IPO and its use by television shows to drive real time audiences, Twitter experienced some major challenges in 2013.

Want to increase your Twitter following? Just fake it. Not quite the transparency social media expects. Research earlier this year showed that fake accounts made up 4% to 10% of Twitter’s user base. Oops!

As a mass, time-sensitive communication where journalists and marketers check for trending topics, Twitter isn’t reliable. Research on tweets from the Boston Marathon revealed that only 20% of the content on Twitter was true information. In other words, 4 out of 5 tweets were misinformation or generic information without value.

Across social media, content sites and media entities, mobile usage far out distanced projections. With smartphone ownership in the US crossing the 50% mark in 2012, this shouldn’t have been as much of a surprise as it was for many of these entities.

Mobile devices are ideal for quick, on-the-go info, whether it’s checking product information and prices, content grazing between other activities, or keeping tabs on family and friends while multi-tasking.

Facebook is the poster child for this type of activity. Its easy-to-consume, bite-size information has propelled 50% of their users to interact via mobile devices.

4. Content marketing grows up and takes its place at the marketing table.

Content marketing reached a tipping point in 2012 and went mainstream in 2013. Content provided useful information that prospects and customers sought without the marketing promotion.

This expansion translated to a redistribution of marketing and business resources, both employees and budget.

In part, this growth was driven by expanded social media use that created a need for increased new, quality content. Need help? Here’s the best content marketing advice ever!

Further, consumers increased their content consumption through a variety of methods including multi-tasking, snacking and delayed viewing. This translated to more efficient content intake with less noise and advertising.

Great, easy-to-use cameras and related apps to modify and enhance photos became available in every mobile device, both smartphones and tablets. This made images the content marketing format of choice in 2013. The ability to share these snackable content shots across social media platforms with just a few swipes and at no cost further accelerated the trend to employ photographs and graphic information as core content marketing elements.

While Facebook is the major repository of photographs, other image based social media entities also took off. The new kid on the block, Snapchat, broke through its teenager following and gained mainstream notice.

The ability to take quality self-portraits made selfie the 2013 word of the year! This practice extends beyond teens to high profile politicians and others of note.

Additionally, videos were increasingly shot and shared. While YouTube remains the 800 pound gorilla of the video space, even shorter form videos gained traction with Twitter’s introduction of Vine and Instagram’s competitive offering.

Social media continues to be sexy, attracting money and recent grads.
2013 showed that there are a number of ways to keep your nascent business growing.

7. Native advertising wants to be legit.

Specifically, native advertising is defined as a form of digital advertising where the brand or firm inserts paid promotional content into the user experience. This information is often unique to the specific platform. As a result, it attracts attention by appearing to be natural, non-promotional content.

In December, the Interactive Advertising Bureau (IAB) released their Native Advertising Playbook defining best practices for the $3 billion format to coincide with the Federal Trade Commission (FTC) workshop on the topic.

These 2013 highlights, in terms of social media, content marketing and mobile, have set the stage for context marketing to grow in 2014.

What other 2013 highlights would you add to this list and why?